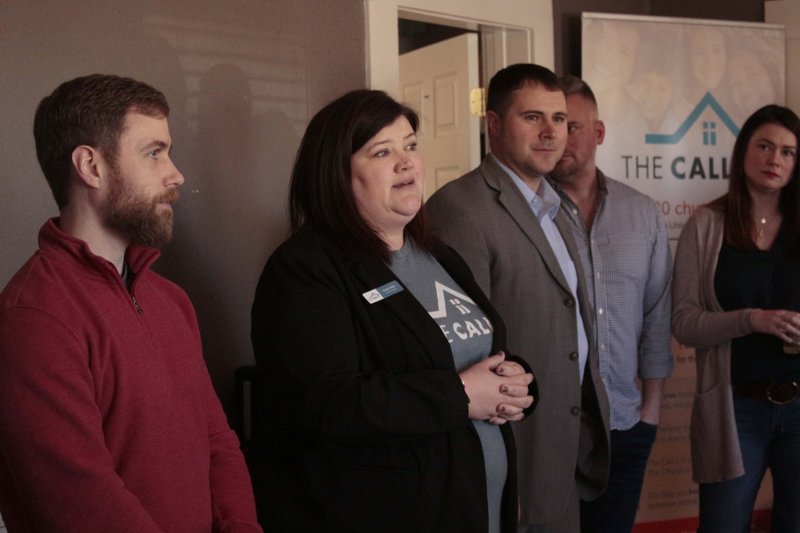 The CALL in Union County Director Karen Hicks (center) addresses attendees of February's ribbon cutting at the organization’s new Support Center. Hicks said Tuesday that all the foster families in the county have full houses and won't be able to help the influx of children entering the foster system.

The CALL in Union County has seen a larger number of kids brought in for care in the last three weeks than it’s prepared for, county coordinator Karen Hicks said.

She said she isn’t sure why this is happening since in-person school sessions were closed due to the novel coronavirus (COVID-19) pandemic, but there are more kids being brought into care.

“While my families aren’t going to say not to a child because of where they may have been or the unknown, our families are full down here,” Hicks said. “There simply are not enough beds.”

The CALL is a nonprofit organization operating in 50 Arkansas counties that matches local Christian families with foster children and helps provide for the families’ needs.

According to the organization’s website, The CALL in Union County is partnered with 180 churches. It also states 71 children in the county spend time in foster care each day due to abuse or neglect. One average, there are 27 families to care for these children.

Hicks said she has less than 15 foster families, all of which are full.

“If we could find one family from every three or four churches to say hey, I can be a foster parent, we would meet our goal of having more foster families than we do children so that when situations like (this) happen, we can simply say we’re ready in Union County — we’re going to take care of our kids,” she said.

Hicks said at the beginning of the pandemic, families were asking her, and each other, if they should possibly expose the other members of their family to a child where they don’t know where they’re coming from.

“I can honestly tell you that now that it’s in it, there’s not one of our families that are going to turn away a kid that needs them because of that,” Hicks said. “I’ve seen that time and time again.”

She said families may begin to ask that question, pause and say they couldn’t turn away a child in need.

One of the struggles families have expressed to Hicks during the pandemic, which has spread to 67 counties across the state, including Union County, is having virtual meetings between a foster child and their biological parents.

“For adults, it’s very easy for us to say, ‘well they can just see each other once a week and we’ll do it that way,’” Hicks said. “For a child who’s let’s say 6 years old, the concept of sitting in front of a screen and looking at your mother and brothers and sisters on a screen is traumatic; it’s not healing. It’s not stimulating the parts of the brain we want stimulated when they’re together as a family.

“They’re still getting to see their families, but I don’t feel like the visitation is what they need and there’s no way around it, but that’s the best case scenario — that’s the best we can do,” she said.

Hicks said because of the virus, the organization has moved to virtual foster parent training for new foster parents. She said she’s unsure of what the new time table will look like to get those families ready, but it may be longer than the typical four to six months The CALL has come to expect.

Since the county’s foster family beds are full, there are a few things that could happen.

Hicks said the first thing the Department of Human Services does is to look for another family member who the child could go and live with, who are referred to as provisional family members. Hicks said they’ve seen larger numbers of family members stepping in, but they often don’t have adequate training or the resources they need.

Another possibility is the child goes to another foster family in a different county. Hicks said for younger kids right now, that wouldn’t be quite as traumatic other than taking them away from any situation where they can see their biological families, which is difficult already due to COVID-19 concerns. For older kids, though, Hicks said it’s hard to find foster homes in or out of the county.

To alleviate some of this pressure, Hicks said she’s a big believer in the power of prayer, but there’s also trying to figure out why so many children are coming into care and combating that as a community.

“On a long term goal, that’s what we want, we want families to heal,” Hicks said. “We don’t want kids coming into foster care.”

Hicks said she is always trying to recruit families to foster children. Those who can’t foster but would still like to help could donate to The CALL. For more information, visit https://thecallinarkansas.org/union/.