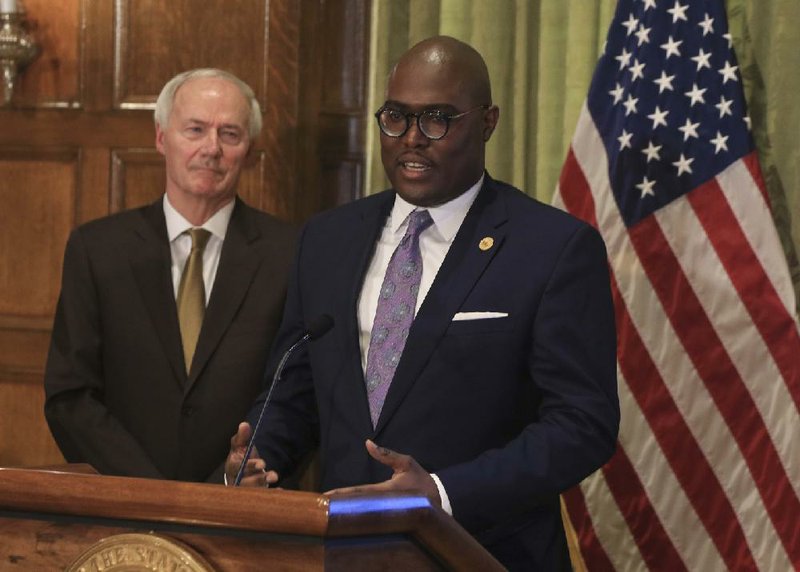 Gov. Asa Hutchinson announced an amendment to an executive order he issued last month that will give city and county officials more power to try to control the spread of the novel coronavirus (COVID-19) in their communities during his daily press briefing Tuesday at the State Capitol.

On March 26, Hutchinson issued an executive order declaring the state of Arkansas to be a disaster area. The order also included social distancing recommendations and some restrictions on public gatherings.

On Monday, he issued an order amending the original order; the amendment gives city and county officials more leeway to take local action to prevent the spread of the novel coronavirus, with the provision that they may not interfere with commerce.

The new proclamation states “reasonable city or county curfews and closures of city or county owned parks and facilities … shall not be interpreted as a quarantine regulation of commerce or travel.” It adds that curfews may not prevent people from traveling to or from work, acquiring food or other necessary goods or services, walking their pets or exercising outdoors.

Several cities and counties have issued curfews, including Little Rock, Saline County and Benton County. Little Rock Mayor Frank Scott appeared with Hutchinson at yesterday’s press conference and said he was pleased with the cooperation between state and local government.

“Partnership and trust is key as we fight through this pandemic and public health emergency,” Scott said. “We are grateful for the opportunity to lead together as we work through a number of different issues … When we have this ability to be creative and issue our own executive orders, it helps us to navigate these waters as successfully as possible.”

“This goes for every police department and sheriff’s department in the state — if you need assistance from the Arkansas State Police, we are there. Whatever tool we have in our toolbox, we are prepared to assist,” Bryant said. “Our major goal is to protect the citizens of Arkansas. We protect and serve.”

Hutchinson asked that any officials planning to take local action first coordinate with his office. He emphasized that he has not issued a statewide stay-at-home order and that localities having their own stay-at-home orders could jeopardize essential operations and commerce.

El Dorado Mayor Veronica Smith-Creer said she is sure the City Council will discuss potential measures they could take to continue to control the spread of COVID-19 locally. She noted that a curfew for juveniles has been in effect in the city since before the pandemic began; it is 11 p.m. on weekdays and midnight on weekends, she said.

“As far as a curfew, that would be something I’d definitely want to discuss with the police chief. … It doesn’t help us to order something the police department or sheriff’s office can’t enforce,” she said, noting that she has been in regular communication with EPD Chief Kenny Hickman, Union County Sheriff Ricky Roberts and Union County Judge Mike Loftin on the subject.

“I don’t know that people understand the jeopardy it could put our police department in. If one police officer gets it and takes it back to the department, they could all end up in quarantine,” she said. “Even with a curfew, people will still need to go to work, and if they’re out outside of the curfew, police would need to stop them to make sure they’re allowed to be out.”

However, she said the issue of a potential curfew or other measures the city may take will certainly be up for discussion among law enforcement officials and the City Council.

“After talking to the police chief and Sheriff, if they think it’s something we need to do, we’ll definitely consider it,” she said. “I just don’t think we’d be doing justice to issue an order we can’t enforce.”

Social distancing guidelines and the closure of nonessential businesses are enforceable by law, per Gov. Hutchinson’s executive order. Those that are convicted of violating the orders may be fined between $100 and $500 or sentenced to a month in jail. The full order can be read at governor.arkansas.gov/our-office/executive-orders.