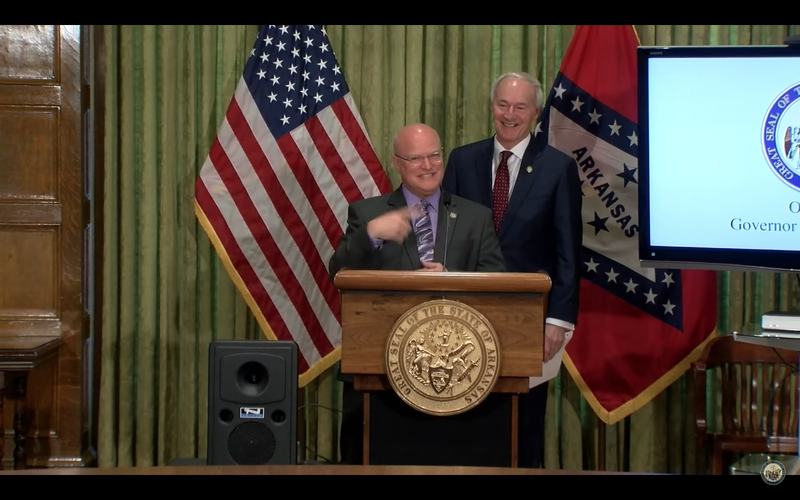 Gov. Asa Hutchinson gave his sign language interpreter, Eddie Schmeckenbecher, the opportunity to introduce himself during Thursday's daily press briefing on the novel coronavirus (COVID-19) pandemic. Hutchinson is pictured behind Schmeckenbecher. Not pictured, Wendy Kelley, Secretary of the Arkansas Department of Corrections, and Dr. Nate Smith, Secretary of the Arkansas Department of Health, also spoke at the briefing.

Wendy Kelley, secretary of the Arkansas Department of Corrections, joined Gov. Asa Hutchinson and Secretary of Health Dr. Nate Smith on Thursday for a press briefing on the novel coronavirus (COVID-19) pandemic.

Kelley highlighted several measures the ADC has taken since the pandemic reached Arkansas to protect inmates and their families as well as prison staff. She said none of the prison system’s 18,000 inmates have tested positive at this time — although two have been tested — and one staff member, who did not work inside any prison facilities, has tested positive.

“We feel very blessed at this time,” Kelley said. “We’re a closed community, so once it gets in it will be disastrous; but because we’re closed, it’s less likely to get in there.”

She noted that inmates that have exhibited symptoms of COVID-19 are monitored and said the medical co-pay charged to inmates has been waived so they are able to receive a check up any time they see potential symptoms.

In-person prison visitations were suspended on March 16, and the rates for video visitation, telephone and emailing have been lowered to allow families and friends to maintain contact with their loved ones inside prison. Probation and parole fees have also been waived for the month of April as a result of COVID-19-related job losses, Kelley said.

Additionally, inmate workers for Arkansas Correctional Industries, a division of the ADC that trains inmates in new skills with work programs inside the prison system, are manufacturing cloth masks that will supply the prison system’s inmates and guards as well as others outside the system.

“Our goal is to target distribution of them for inmates and staff,” Kelley said. “We have an order in for the department (ADC) for 20,000 of those; our medical provider has an order in for 5,000 of those; and then Correctional Industries should be able to manufacture a total of 80,000 and we’re going to work with A.J. Gary (Secretary of the Arkansas Dept. of Public Safety) to determine where those others should be distributed.”

The masks were modeled after cloth masks that were already being used by the ADC’s medical staff.

Hutchinson addressed several economic issues, including unemployment in Arkansas and rent payments that are due for many Arkansans this week.

“In my lifetime, we’ve never seen anything like it (the current economic downturn) at all. You can see that in our economic report,” he said. “Last month, we were rocking along fantastically in Arkansas — a surplus, generating more revenues than were forecast — then all of a sudden it took a nosedive because of this virus, and we’re having to adjust our budgets downwards and every business is having to do that.”

He said tens of thousands have already been laid off in Arkansas. Last Friday, 27,250 unemployment claims had been filed and processed; an updated unemployment figure for Arkansas is expected this weekend. Over 6 million people nationwide filed for unemployment last week.

Many who have attempted to file for unemployment have been unable to due to the state’s systems being overwhelmed by the sudden high volume of filers. On Wednesday, Sec. of Commerce Mike Preston asked that those working in the ‘gig economy,’ such as self-employed individuals and independent contractors, wait to file for Pandemic Unemployment Assistance allocated through the federal CARES (Coronavirus Aid, Relief and Economic Security) Act until the state has released further guidance, which they are waiting to receive from the federal government.

“We’ve just touched the surface here in this state in terms of unemployment numbers. There will probably be more filed in the next two weeks than were in the last two weeks,” Hutchinson said yesterday. “The economic news is not good; that’s why we consider this not just a health crisis but also an economic crisis.”

He also recognized that for many Arkansans, rent was due Wednesday; he said he has spoken to landlords who are accounting for their renters’ circumstances. With most of the states’ courts closed currently, Hutchinson said he also sees a practical moratorium on evictions already in place. He said he will take action on evictions if it becomes necessary.

“They’re very accommodating. If there’s a COVID-reason that someone can’t pay their rent, they are more than accommodating to waive their penalties, interest, to make sure they can get their cash payment,” Hutchinson said. “They do say ‘once you get your cash payment’ — from unemployment or more so the federal government — ‘pay your rent,’ because if you don’t pay your rent then, then all of a sudden the landlord who has a mortgage can’t pay that and there’s a mortgage foreclosure and then it escalates down the chain.”

Smith and Hutchinson addressed the state’s current supply of medical supplies. Smith said the state received two shipments of chemical reagents used for testing samples for COVID-19 over the course of Wednesday and Thursday; he said he expects another shipment soon and that he is comfortable with the current supply of testing reagents.

Hutchinson said Arkansas has received 70% of the personal protective gear (PPE) supply due from the National Strategic Stockpile. A shipment of PPE privately purchased by the state has also begun arriving and will continue to over the next two weeks, he said.