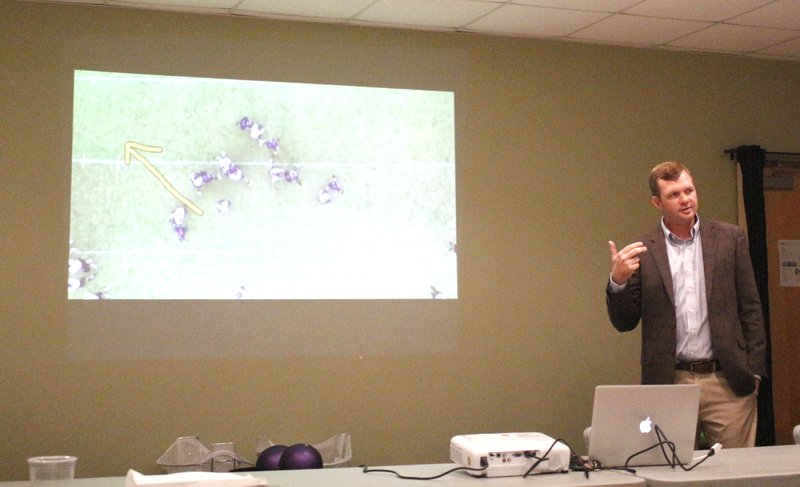 Steven Jones has a strategy for overcoming the usual challenges that accompany any leadership transition: tempo.

The new El Dorado High School football coach, speaking with members of the Rotary Club of El Dorado, said there’s often excuses made during the first year of a new football coach, but he’s not interested in leaning on any of those. While working at Searcy High School, he learned from head coach Mark Kelley that there isn’t time to waste when building a football program.

“He has an up-tempo lifestyle, and that really spilled over into what I think is the right way to coach football,” Jones said. “There’s no wasted time. You look out at our practice field and something is always going on. The ball is being snapped, and that forces us to get better. Some of the things you might hear when you hire a football coach is that the majority of our guys are new — we have a new coaching staff, a new offense and defense philosophy — and that it’s going to take some time. But if you come in with urgency and come to work every single day with urgency, that wipes out that transition time.”

Jones came to El Dorado from Junction City, where he led the Dragons to the 2A state championship last season. During the Rotary meeting, he demonstrated how El Dorado records practices using a drone, a next level of review that allows coaches to provide even more accurate feedback to players. Coaches are able to add comments for specific students, who can review those comments from their phones at home.

“We feel like where we’re at, technology is an advantage and something we can use every day to give our kids the best chance to win,” Jones said. “We film practice every day so we can review and correct it. When we film practice with a drone, we think this is the most advanced thing you can do as far as practice goes. We’re very fortunate to be able to look at it to see things we might not see from the sideline or behind.”

With upgrades to Memorial Stadium and an indoor practice facility set to open up sometime this fall, Jones said he’s grateful to the school and the community for supporting athletics. He noted that his staff emphasizes academics with the players as well, since most will finish their playing career in high school.

“Every single kid who comes through our football program thinks he’s going to the NFL, and that’s, unfortunately, not likely going to happen,” Jones said. “It’s hard to get a kid at 16 years old to realize they need a backup plan. So we really push [academics] from our end and we want to be involved in supporting them so when they graduate, they have something to work with.”

Jones also noted that while football can be a dangerous game, having a strength and conditioning coach for all students involved in athletics and an athletic trainer means football in 2019 is as safe for El Dorado students

“We have a protocol we go through if someone takes or gives a big hit,” he said. “We’re going to check on them and make sure they’re ready to play before anything else happens. It is a dangerous game, but it’s dangerous to do anything. The trade-off, in my opinion, outweighs the risk.”

He added that being on the team helps instill valuable life lessons in the young men who put on the El Dorado uniform.

“Football is unlike any other sport. If one person takes a play off or doesn’t do his job, something bad is going to happen,” Jones said. “That creates accountability. The beautiful thing about it is, it doesn’t matter how much their dad makes or where they grew up, they’re working toward one common goal, and that’s something you don’t see too often in this country: People from different backgrounds working together.”

Asked about how his team is coping with the loss of Octavius Critton, a senior defensive back who was shot and killed in August, Jones said that it’s been a difficult time and that his staff has worked to provide the support his team needs.