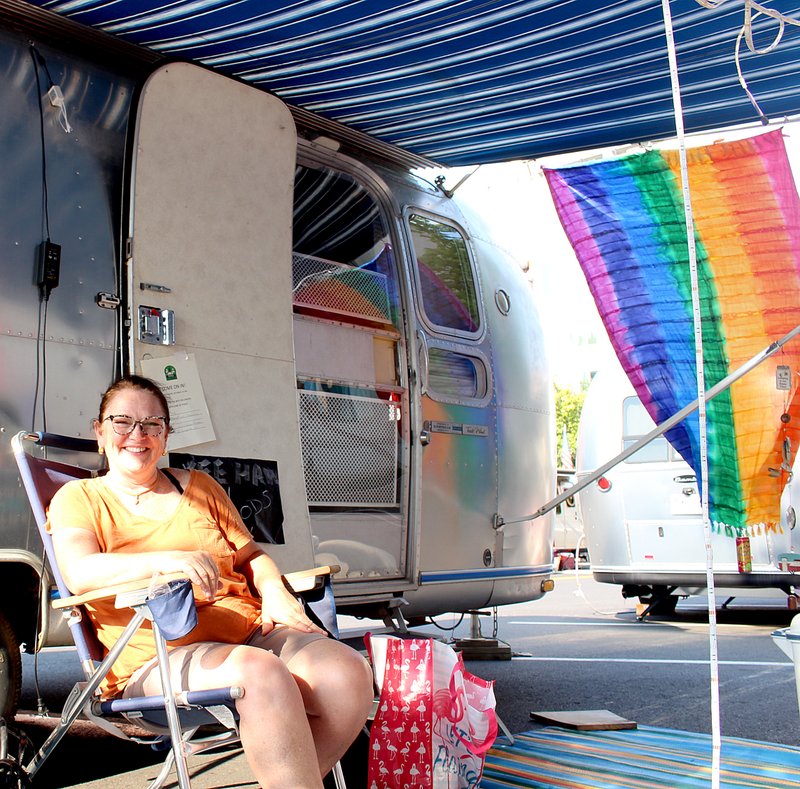 The second annual Airstreams on the Square event was held over the weekend, bringing campers in their classic aluminum Airstream recreational vehicles (RVs) to the Union County Courthouse square.

“I like the people – very friendly, very nice; I like the progressiveness of the city and the vibrant mix of people,” Mark Broussard-Hubbard, of Carenco, Louisiana said, sitting inside his modern Airstream as local residents popped in to tour the camper.

“This town has a great mix. I like the way the companies here give back. We always go to Murphy Oil when we see them,” he went on.

Broussard-Hubbard traveled to El Dorado with his husband, Michael. The two have been Airstreamers since 2013, traveling across North America in the two Airstreams they’ve owned since then.

“It’s a great town. Everybody’s been pleasant and nice,” Michael said. “The merchants have been great – we’ve taken over the street and they still welcome you.”

Mark said the two did some early Christmas shopping on the square. Both retired, the two travel often.

They were attracted to the Airstream lifestyle because of Mark’s fondness for planes. He’s been a pilot since he was 12 years old, he said, so his affinity for the aluminum and rivets that epitomize the Airstream aesthetic makes sense.

“If you look at it, it looks like the cockpit of a plane,” Michael said.

The couple offered tours of their camper to anyone interested. Inside, a queen sized bed filled the back third; a full bathroom, including a standing shower, fills the middle third; and a full kitchen, including a stove, oven, microwave and sink alongside a dining area are in the front of the camper.

Mark said they use a Ford F-150 truck with EcoBoost to pull the Airstream camper and that it is the best vehicle they have found yet for that purpose.

Mark, a photographer, pilot and artist, could be seen throughout the camper as his landscape, aerial and event photographs flashed across television sets inside. Michael said they plan to return next year.

“The leaders of the city have done a great job in spurring the energy here,” Mark said.

“It’s awesome! We love it. Everybody in El Dorado is so welcoming and great,” Kugel said. She and Dalrymple have traveled throughout North America as well, visiting both coasts and occasionally attending the Burning Man festival in the Black Rock Desert of Nevada.

Kugel’s Airstream was older than the Broussard-Hubbards’; her’s is a 1991 Classic model named Gurdy. Inside, wooden cabinets line the shelves, a full bedroom fills the back of the camper and a captain’s chair sits in front. Her Airstream can be driven instead of hauled.

“We’ve always camped,” she said. “We started out with tents, then a pop-up, then a bumper pull, then we went to a big 5th wheel (RV). … We’re hooked now and you couldn’t pay me to have anything else.”

Cindy Braden is a solo-traveler from Birmingham, Alabama. This was her first time visiting El Dorado, though she’s no stranger to Airstream rallies. She said next year, she’ll travel to the Airstream Club International rally with a caravan of other Airstreamers.

“I think that this town has been very, very hospitable,” she said. “They give us a chance to shine – no pun intended.”

Braden said she’s always liked to travel. She bought her first Airstream five years ago and likes to go camping with her daughter’s family, using her Airstream as a “mother-in-law” to mind her grandchildren in.

“The big thing about Airstreams is that they have such a supportive community,” she said. “They’re really supportive of females traveling alone.”

Her longest trip so far has been 1,700 miles; she said she’s traveled all over the southeast in her 1878 International Tradewind.

“I love to see young people getting involved,” she said. “Get you one!”

With porthole windows, wooden walls reminiscent of bamboo and a tropical decorating scheme, the Steeds have embraced the theme of their camper.

“We love it here. These are the friendliest people,” Frank said. “It’s been a great trip. … We’ll come back next year.”

The Airstreams on the Square event is organized by the Arkansas Razorbacks Airstream Club and Main Street El Dorado. Visitors began arriving Thursday and left yesterday. Many in attendance expressed their hope that the event continues next year.