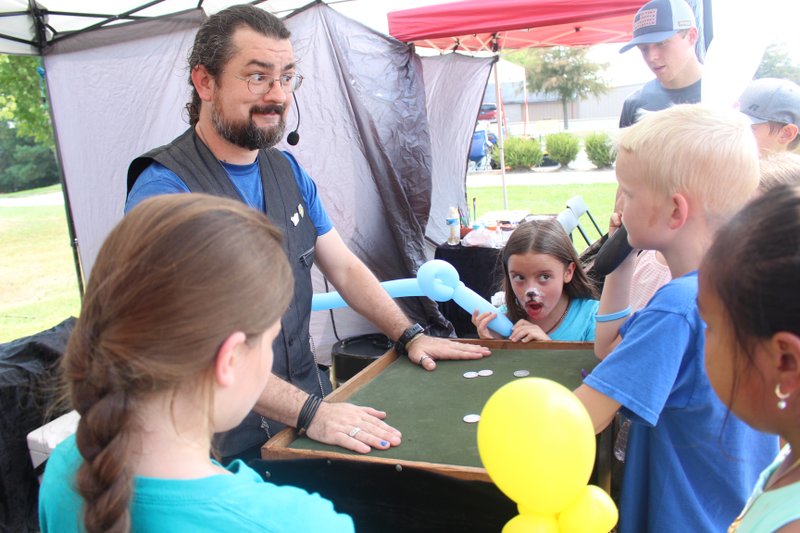 Magic tricks: Children react to magician Cedric Morley making a coin jump from one side of his table to the other without being seen. Morley traveled to the Expo from Cave City, where Morley Family Magic is based. Caitlan Butler / News-Times

Despite temperatures of over 100 degrees, hundreds of Union County and south Arkansas residents attended the Outdoor Expo at South Arkansas Community College yesterday.

For the 21st year in a row, the SouthArk Foundation has presented the Expo, bringing family fun to El Dorado. This year’s event coincided with the second annual Airstreams on the Square event, where Airstreamers camp around the Union County Courthouse to promote their Airstream lifestyles and economic vitality in small-town America.

“It’s been great,” said El Dorado Fire Chief Chad Mosby. “A bunch of people, we’ve given away a bunch of food.”

Mosby was manning a grill at the Tailboard BBQ stand, where current and former firefighters were competing in the Expo’s rib cook-off.

“The tailboard is on the back of a fire truck, after a call, where we sit and fellowship. That’s what the team is all about,” Mosby said.

On either side of the Tailboard team’s grill set up were police officers, some from the El Dorado Police Department and others from the Union County Sheriff’s Office, also competing in the cook-off.

“I cook for the public. If they like it, I’m good,” said the UCSO’s Chief Deputy Charlie Phillips as he manned the grill at his station. The UCSO made ribs, hot wings, sausage, hamburger-on-a-stick and stuffed jalapeños; by the early afternoon, they were already low on food.

Frank Echavarria attended the Expo with his children, Aceen, Alex and Joshua. He said they come every year.

“They like to do the bouncy houses and do all the police stuff and fire truck,” Echavarria said. Asked how he was handling the heat, he laughed and said “I’m hanging in there.”

Aceen, Alex and Joshua received demonstrations of the operation of the EPD Bomb Squad’s bomb robot from Officer Sam Bennett. The EPD has the only bomb squad south of Little Rock and serves 26 counties.

“We have a decent load-out, a lot more than people realize,” said Officer Dallas Smith, also attending the bomb squad’s display. “I like it … Who else gets to play with robots?”

Washington Street from Locust to Pony was filled with rib cookers, representing civic organizations and businesses from across the region. Walter Lyons and Tony Morgan, of Hogwalla BBQ, traveled from Pineville, Louisiana to give the cook-off a shot. Lyons said they’d taken second place in their first-ever cook-off just one week ago.

“The secret ingredient is love,” Lyons said, describing the specialty homemade seasoning his ribs use. He said he and Morgan are considering expanding their business with either a brick-and-mortar restaurant or a food truck in the coming months.

Industrial supply vendors lined the hill leading to the El Dorado Conference Center, where children’s activities were located. On one side were the ever-popular bouncy houses of Kid’s World, and on the other, Cedric and Armilda Morley of Morley Family Magic performed.

Cedric performed illusions, making coins disappear and jump without being seen, as amazed children looked on. Armilda made impressive balloon animals, symbols and any other items the children asked for.

Event officials were pleased with this year’s turnout, said Heath Waldrop, director of marketing and public relations at SouthArk.

LeBryant Crew, known for his success on singing competition “The Voice,” performed with his band, SYNRG in the early afternoon. Crew was full of energy as he sang to the band’s funky sounds. Other musical acts included the Cummins Prison Band and Aces Wild.

Winners of the rib cook-off

3rd place, taking home $250 and trophy: Delek US — Getting Piggy with It