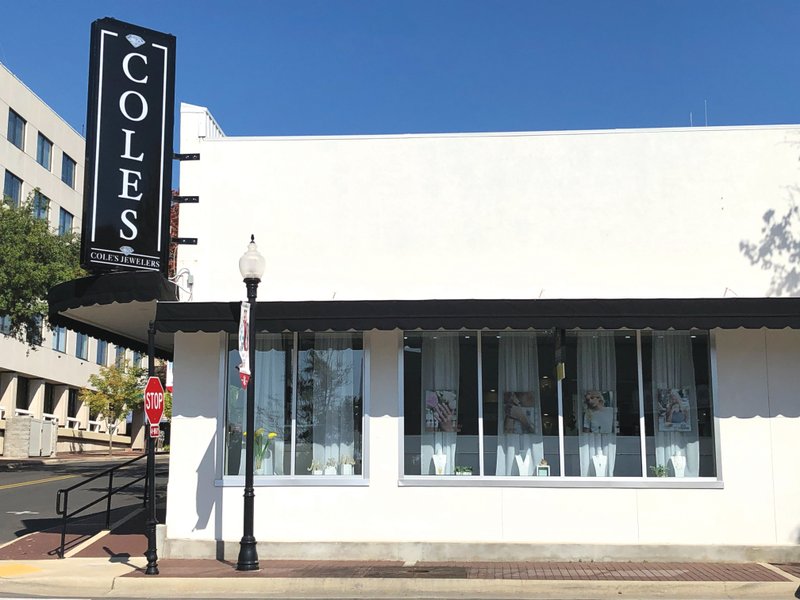 A view from the south side of Cole's Jewelers' downtown location.

Driving in downtown El Dorado, the new Cole’s Jewelers sign at the corner of Washington and Cedar jumps out: it’s simple, elegant and reminiscent of more stylish signs from the first half of the 20th century.

For El Dorado lifers, the sign will also bring back memories of its predecessor. At that same corner for decades was a Samples Electrical City sign across from what to be the Garrett Hotel. The sign featured a GE logo illuminated with neon lights and led patrons to the store, which had two entrances: the first for the home appliance section and the second, at the end of the block, which led customers to the lower level for the record shop, an area where they could purchase radios, records and record players and TVs. Electrical City was an expansion of the Samples department store that sat just south of the courthouse further up Washington.

As recounted by Joe G. Hollyfield in an account titled “Mid-20th Century Recorded Music Sales in El Dorado, Arkansas,” the store was a haven for music lovers in South Central Arkansas, and received several famous visitors. Hollyfield, whose mother, Nelwyn, worked at the store for a decade, writes that music legends like Elvis Presley, Johnny Cash, Tex Beneke and Jimmie Davis, the two-time governor of Louisiana who penned the song “You Are My Sunshine,” visited Samples Electrical City.

“The sign was based off the original sign,” she said, adding the sign was designed by Lindsey Perry at Artattack Graphic Design in El Dorado. “They used portions of the original sign, along with a sign given to me by Gerald and Belinda Cook from Cook Jewelers. The combination of those materials makes the sign not only special to me, but to the history of the building.” 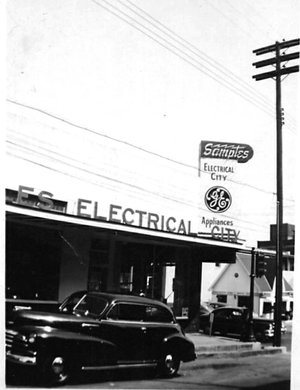 Photo by Contributed photo
The downtown building that now holds Cole's Jewelers used to be the location of Samples Electrical City. The new Cole's sign takes its inspiration — and some material — from the old Samples signage.

The downtown Cole’s Jewelers location, which opened in 2018, is actually the second in El Dorado — the other is located at 424 S. Newton Ave. The renovation was completed by Diversified Construction.

“Buddy McAdams, Blake Williamson and their team remodeled out downtown location,” Leverette said. “Without them, none of it could have been possible. They brought our vision to life, and more!”

Leverette, who grew up in the store, helping her parents Wayne and Gail Cole along with her siblings before ultimately running it beginning in 2007. Her daughters Lindsie and Kacie Leverette help out on a full-time and seasonal basis, respectively, making Cole’s a third-generation local business. Sister Pam Kelley and husband Wade Leverette are instrumental as well.

“This is my passion, I absolutely love it, everything about it,” Leverette said. “I love going to market for it, I love waiting on customers. I want my kids, my grandkids to keep Cole’s going on for a long time. “I couldn’t do it without family. Wade helps with everything.”

“We redesign people’s rings using their stones, or we provide them,” she said. “Bryan does awesome work.”

Leverette said adding a second location in downtown El Dorado made a lot of sense.

“We were drawn to El Dorado’s downtown for many reasons,” she said. “First, it’s where our town’s future and past come together. The square is a huge part of our history, and we love that we are now part of that legacy. We are also excited to be neighboring the Murphy Arts District. There’s always something exciting going on, with many people enjoying all that downtown has to offer.

“We hoped we would fit in well and expand our business, and it’s been a wonderful experience so far.”

Leverette said that while there are two Cole’s Jewelry locations in El Dorado, each is its own store. The downtown location features Kendra Scott Jewelry, and she plans to introduce Karl Lagerfeld next month.

“We try to do something different, so it’s like shopping at two completely different stores,” she said.