'He’s a musician through and through' 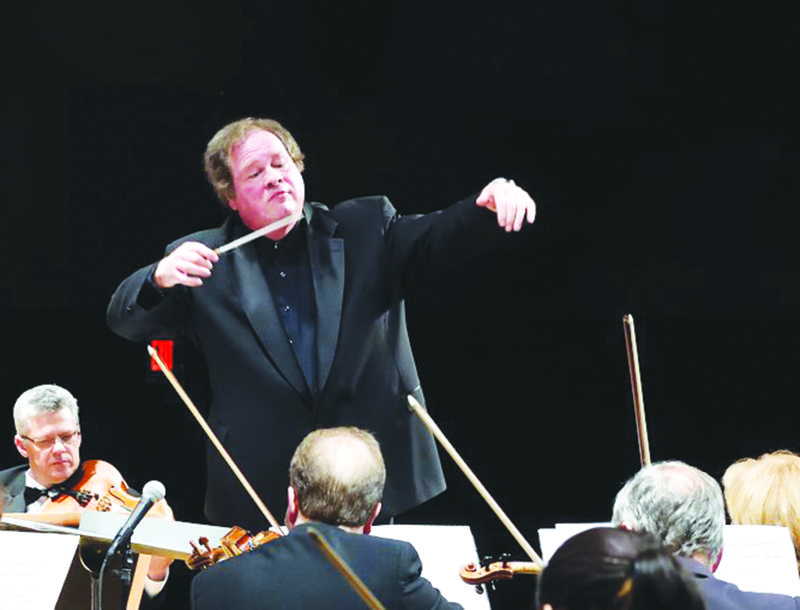 On opening day of “Hello, Dolly!” at the now-Cassidy Theatre in 1975, 15-year-old Kermit Poling was handed the conductor’s baton and asked to lead an orchestra through almost 2.5 hours of play.

That day, Poling was bitten by the conductor bug that would shape the rest of his career.

“A lot of people don’t realize I got my start conducting in…the theatrical world, and I consider that a great plus,” Poling said. “Even though broadway-style music is a small part of what I do, I feel that all of what I do, it helped to have those influences and opportunities when I was young.”

Forty-four years later, Poling is gearing up to play his original score to the cult classic 1922 silent film “Nosferatu” for the third time on Halloween night with the West Edge String Quartet at the First Financial Music Hall. This one, though, only runs for about an hour and a half (two if you count intermission, which the other three musicians would like to do in order to give their arms a rest).

The quartet, which is based in Shreveport, consists of Poling, often on violin or filling in for whatever stringed instrument necessary; Elizabeth O’Bannon also on violin; Boyrs Smolaga on viola; and Ruth Drummond on cello.

Poling plays and conducts the quartet, but he’s also the music director for the South Arkansas Symphony Orchestra, associate conductor of the Shreveport Symphony — and former concertmaster — music director of the Shreveport Metropolitan Ballet and general manager of the Red River Public Radio network, which is based at the Louisiana State University at Shreveport campus. He also composes and arranges music for shows like “Beauty and the Beast” and “Madame Butterfly.”

He also told the News-Times he just finished composing his second guitar concerto that took about two years to write.

Although he seems busy now, Poling has always been busy, so it’s nothing new. In fact, he enjoys it.

“I had only intended doing (radio) for a short time, but I find that I really like it and I think it’s very important, so I’ve stayed with it,” Poling said. “It makes me busy, but I think it’s well worth it.”

She said Poling has always been a professional conductor and player, but he’s never been as busy as he is now.

She said Poling has always been quick to put things together, but one of his big strengths is to put together a big program in a little amount of time.

Poling said he’s been able to put together ballet programs in a two-month time period.

“It depends on the piece, but it also depends on what I’m doing,” Poling said. “I work best with deadlines, so if I have a deadline, I’m more likely to get it done sooner than if you tell me, ‘yeah, we need it in two years.’”

Poling said he’s been balancing his schedule since he was young. He said he grew up in Parma, Ohio, which is 20 minutes outside of Cleveland, surrounded by music since both of his parents were singers.

When he was 5 years old, his mom started him on piano lessons. A year later, he picked up the violin — although his parents didn’t know until they were fitted a bill for the Suzuki music program.

As he got older, he got interested in orchestral music and loved the symphony orchestra.

Poling said he played in school bands and orchestras as well as regional youth orchestras while he was growing up. He also played the rehearsal piano for the now-Cassidy Theatre.

After taking over as conductor for the “Hello, Dolly!” show because the original director ran off with the choreographer, the theater asked if Poling would be the music director for the next show.

“I was just fortunate that the music programs that we had and my teachers both in school and outside of school…were all so supportive and encouraging,” Poling said. “They gave me every opportunity that they could. Even in high school, I was able to write music for them and conduct them in rehearsal.”

Once he was 18 and went to the Boston Conservatory, Poling never looked back. He was primarily a violinist and became first chair for the conservatory orchestra, as well as some of the smaller orchestras in the region.

He even took it upon himself to record some of the orchestra’s performances and then volunteered with the radio.

A few years later, he got his first big professional gig with the Puerto Rico Symphony and stayed for three years.

He soon began to volunteer with the Red River Radio Network after going on air during a show, and later became the conductor for the South Arkansas Symphony Orchestra, which he’s been with now for over 20 years.

Madison Murphy — chairman of the board for Murphy USA, former director of the Murphy Oil Corporation, president of The Murphy Foundation, managing member of Murphy Family Management and board of directors member of Deltic Timber Corporation — said he was impressed with the changes made at the symphony orchestra when he returned to El Dorado in the late 1980s.

“He has dramatically improved the quality and maintained high standards for the symphony through his energy, experience and drive single-handedly,” Murphy said. “The symphony is an important part in the community. … (We’re lucky) that (Poling)’s talent and energies have benefited this community and region.”

Michael Donnella has been president of the executive board of the symphony for at least four or five years. He said since the former executive director, Scott Wattkins, left the symphony, Donnella has assumed some of the responsibilities of a director. He said this means he gets to work closely with Poling.

Donnella said he’s been a music fan all of his life, and simply calling Poling a musician is an understatement, although he did say “he’s a musician through and through.”

“He’s a world class conductor and composer of music,” Donnella said. “He obviously cares about music. He cares about it as a profession. I think it’s the gift he’s able to give to people.”

Donnella said the community, and region, is lucky to have Poling within its midst, but the symphony is lucky to be able to continue on because of the support it receives from its donors and subscribers.

O’Bannon also said the area is lucky to have Poling and that he’s an invaluable members for the community.

“He really is kind of a glue to our musical community and I hope that our audiences really, truly, and our communities, appreciate the contributions he’s made to this area,” O’Bannon said. “He could’ve made a career anywhere and he chose this area. …. This is home, and he’s made it his mission to bring music to everyone.”

The West Edge String Quartet will perform Poling’s original score in accompaniment with “Nosferatu” at 7:30 p.m. Oct. 31 at the First Financial Music Hall. Tickets range from $15 to $40 and are available for purchase online on the Murphy Arts District website (eldomad.com), over the phone at 870-444-3007 or in person at the box office.