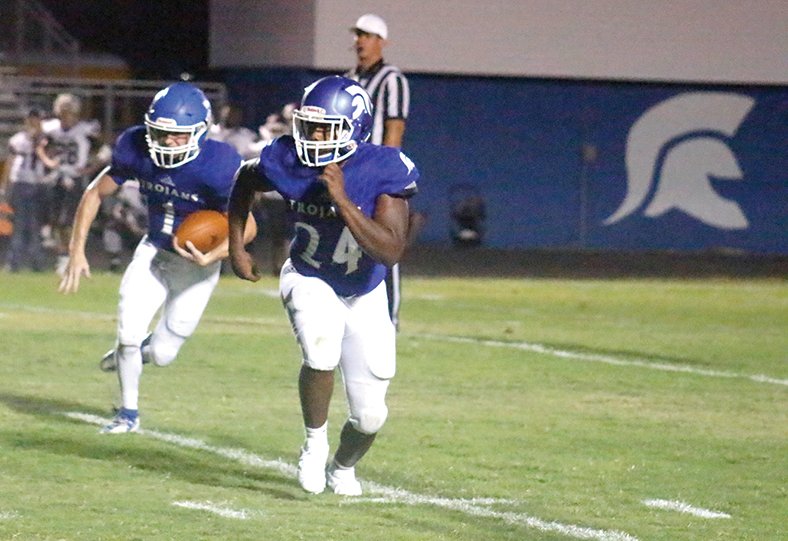 Caleb Slinkard/News-Times Parkers Chapel running back Kori Morris (24) looks to clear a path for quarterback Caleb Jacobs (1) during their game against Foreman earlier this season at Victor Nipper Stadium. Parkers Chapel hosts Bearden tonight in a pivotal 8-2A showdown. Game time is set for 7 p.m.

The history of the series between Parkers Chapel and Bearden has not been kind to the Trojans.

An overtime victory four years ago marks the only occasion the Trojans been victorious.

Parkers Chapel has never hosted a playoff game in their history, but the Trojans host the Bears tonight in an 8-2A showdown needing a victory to take another step closer to reaching that goal.

Game time is set for 7 p.m. from Victor Nipper Stadium.

Bearden (1-4, 0-1) has lost four straight, but played a brutal first-half schedule with the Bears falling to Harmony Grove, Hazen, Gurdon and Fordyce.

Both teams enter off of bye weeks.

“They have a new coach with a new offense and a new defense, so they’re still trying to find their way.

“It’s definitely a game we feel we can compete in, but also a game that if we don’t come out and play, they can beat us.”

Jacobs said the Bears will show a variety of looks on both sides of the ball.

“We’ve seen them in a variety of things. Anything from the I to five wide throwing it. We’ve got to be prepared for all of it,” Jacobs said. “We’ve seen them in multiple defenses. Like most 2A schools, they’re trying to figure out what their personnel can do.

“We can’t really match our personnel to our kids some times, we’ve got to adapt, and that’s what they seem to be doing. We’ve seen them in a three-front, four-front. We’ve worked all week on both so that our kids are prepared.”

As far as the bye week is concerned, Jacobs said his team went back to the basics.

“Just the fundamentals,” Jacobs said. “We watched our previous four or five games and if we saw something that kept coming up that needed to be corrected, we made sure we focused on that last week. Toward the end of the week, we started preparing for Bearden, but we mainly focused on us and how we can get better.”

The Trojans cleared a major hurdle to hosting a playoff game two weeks ago by beating Hampton.

Now they must take another step if they’re to make that a reality.

“We talked about that this week that step two of our goal is this Friday. We’ve got to beat Bearden,” Jacobs said. “That would leave us with one more step to go to have the opportunity to host a playoff game. It’s the same thing with Hampton.

“Our seniors have not beaten Bearden in high school, so they’re focused and ready to go. We just have to come out and execute.”

If the Trojans are to knock off the Bears, Jacobs said there were three things his team must do.

“We have offense, defense and special teams goals,” Jacobs said. “There’s three goals for each phase of the game, but if I can pick one, offensively, when we’ve scored 35 points, we’ve won the games that we’ve done that in.

“Defensively, we need to create two or more turnovers. The only game we didn’t was Foreman, and we lost. Special teams, we call it hidden yardage. There’s a formula we use, but if we’re on the plus-50 side of that, we’ve won all of our games, so those are three things we’ve got to do.”