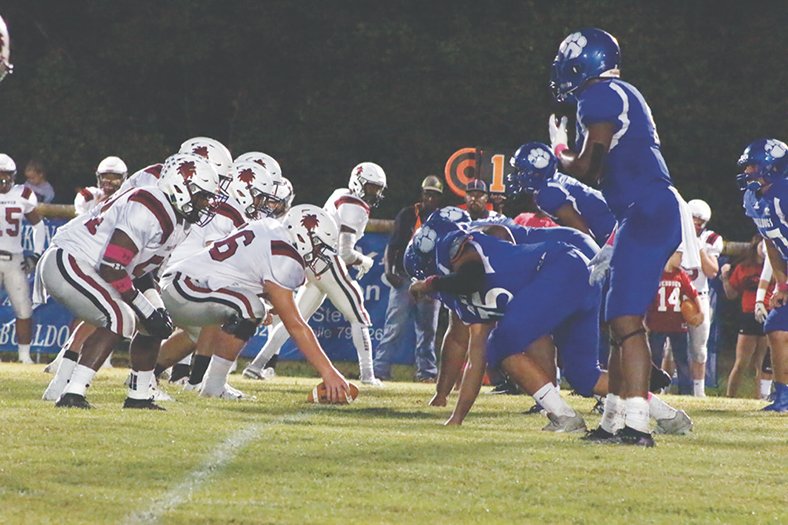 Caleb Slinkard/News-Times Strong's defense gets ready for a Fordyce play during their 8-2A game last Friday at Jerry Burson Field. Strong plays host to Hampton Friday in a critical conference game for both schools.

After a tough first half of the season, Strong begins the second half of its 2019 slate on Friday by hosting Hampton in an 8-2A contest.

Game time is set for 7 p.m. from Jerry Burson Field.

This week marks homecoming for Strong (0-5, 0-2), who will face just its second opponent who has a losing record with Hampton (1-4, 0-2) entering with a three-game losing streak.

For Strong coach Sirl Wright, whose team has played a 4A school, two 3A schools and two league heavyweights, the second half of the season could provide some momentum for the Bulldogs.

“That’s how we look at it,” Wright said. “We look at it in two phases. The first phase is the non-conference schedule, and we had a pretty difficult non-conference schedule. Once we moved into Junction (City) and Fordyce, even though they were formally 3A, they always have a lot more numbers than we have, and they’re always going to be in that top-five mark in 2A, so I try to break it up in to sections.

“Non-conference is pretty much practice to get ready for the conference, and then from there, we look at conference and imagine that everyone is 0-0.

“Even though we lost to those two teams, I tell them that we really have to bear down on the second half of the schedule.

“Those are the teams we can focus on to compete with and try to keep the morale up because when you get beat up in the first half of the season, no matter if you’re in the NFL all the way down to pee-wee, if you start 0-5, morale gets down and effort starts to decrease and you have to deal with all those types of issues going into the second half of the season.”

Although Strong fell to Fordyce in their home opener last week, the Bulldogs’ defense played well early on with Byron Maze finishing with nine tackles, including eight solo stops, and Caleb Chambers had an interception with five tackles.

Jamyron Thompson also had five tackles, and Wright said he was pleased with his team’s effort.

“Even though it was a lopsided victory, I thought our kids competed hard,” Wright said. “I felt that we grew a little bit more from previous weeks. They felt they competed at a higher level.

“They took that as a positive. Normally, it’s been a morale thing. Once a team scores twice or something like that, they let their momentum get to them and it just gets out of control, but it was more competitive.”

Hampton has struggled against its neighboring rivals in Union County with the Bulldogs having suffered three of their four losses against Smackover, Parkers Chapel and Junction City with the latter two coming in the last two weeks.

“They’ve got kids that seem like they stay aggressive, even though they be losing,” Wright said.

“They seem like they continue to fight throughout the game. That’s one factor. As far as size, I think we match up with them.”

As the calendar gets deeper into October, teams are beginning to jockey for playoff positioning, and Friday’s game will go a long ways towards determining the postseason fates for both schools.

“I feel that we need to bring the emotion to the matchup,” Wright said.

“I talked to the kids about prestige factor. I showed them the tape when Alabama played Ole Miss and how Ole Miss wasn’t energetic when they made a good play.

“Then I showed them the film of them playing Southeastern Louisiana, and Ole Miss was jumping around all excited and showing emotion.

“Basically keep it simple and aggressive by blocking, tackling and executing, just bringing that emotion with that playing style.”