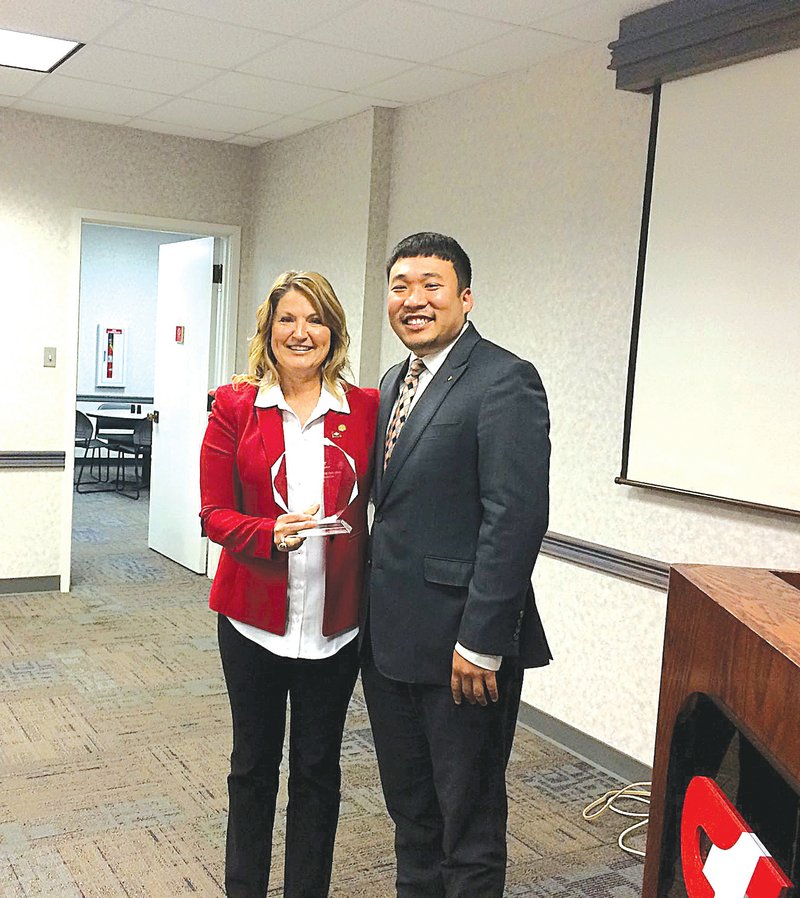 Rep. Sonia Barker (R-Smackover) was recognized Tuesday evening at the Union County Republican Committee meeting for her commitment to family values. Ken Yang, left, director of governmental affairs for Little Rock-based conservative nonprofit Family Council presented her with an award for receiving an A+ voting record scorecard from the organization.

Rep. Sonia Barker (R-Smackover) was recognized for her family-oriented voting record Monday evening at a meeting of the Union County Republican Committee.

Ken Yang, director of governmental affairs for Family Council, a conservative nonprofit based in Little Rock, was in attendance to provide a legislative update on the socially conservative issues the organization supports.

Barker, a teacher at Smackover-Norphlet High School, represents District 7 of the Arkansas House; in 2016, she ran on a platform of having strong family values and understanding the needs of south Arkansas.

As a representative, she has supported legislation focused on children, education and her district. Yang lauded her support of anti-abortion measures, including Act 700, which she co-sponsored this year, which enhanced the requirements a doctor must meet in order to be allowed to perform abortions.

“I don’t like to use the word lobbyist – but there are those that you know that you can trust, and they’re telling you the truth and … I really appreciate Ken’s … energy for and his dedication to protecting life,” Barker said.

The meeting was also an opportunity for resident Republicans to learn about ‘family values’ legislation passed or reviewed in the most recent session. Yang highlighted several laws passed, including anti-abortion measures, homeschool and school choice initiatives, restrictions on marijuana use and a free speech law.

“This past session, we dealt with the social conservative issues; we like to say we deal with what you would normally hear on Sunday morning at church, we try to bring that to the halls of the Capitol – traditional family values,” Yang said. “In the course of this past session, we had a really, really good session.”

Yang said the 2020 election will be a good opportunity for Republicans in Arkansas to field conservative candidates, since Democrats will want to vote for a presidential candidate in their own primary; Arkansas is one of 20 states with open primaries that allow voters to choose which primary election they will vote in, regardless of party affiliation.

He said it is also a time for Republican unity, even when ideological differences exist.

“Support your Republican after it’s all done,” he said. “Be an adult and support the Republican, because I can guarantee you this – the Republican is always better than the Democrat.”

In other business, Goldie Hilburn was nominated and approved to act as the committee’s secretary. Next month, eight representatives from the committee will travel to Texarkana to attend the 4th District Republican Committee Meeting.

The next Union County Republican Committee meeting will be held Nov. 4 at 6 p.m. on the second floor of Simmons Bank. Attorney Henry Kinslow will be in attendance to help any candidates for office fill their filing forms, as will be a public notary.

Local Democrats have also been preparing for next year’s election. Last month, the Union County Democratic Committee held a Democrats on the Move event, where Democrats from across several counties in south Arkansas met candidates for office and talked about 2020 issues.

On Monday, Bishop George Calloway, who will face Barker in next year’s election for her position representing District 7, will hold a campaign kick-off event at 6 p.m. at the Union County Courthouse. On Oct. 19, the Democrats will host a fundraising dinner with Josh Mahony, a candidate for the United States Senate seat currently held by Tom Cotton, speaking. The event costs $40 to attend, will be held at the Granite Club and is slated to begin at 6:30 p.m. that night.

For more information about the Republican Committee, visit arkansasgop.org/unionco.