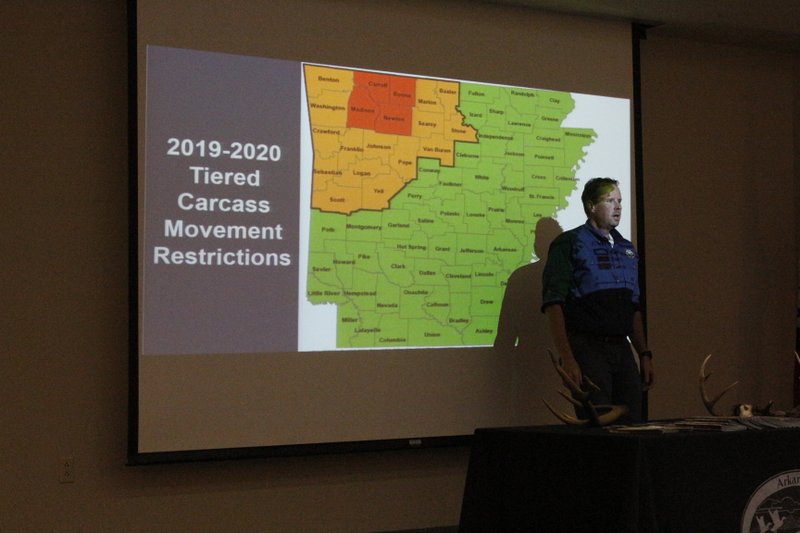 AGFC on CWD: Cory Gray, with the Arkansas Game and Fish Commission, presents a seminar on chronic wasting disease, which has been affecting deer in the northwest part of the state for the past three years, on Tuesday. - Photo by Caitlan Butler

The South Arkansas Community College Library was full Tuesday evening as Cory Gray, chief of the Arkansas Game and Fish Commission’s research, evaluation and compliance division, presented a seminar on chronic wasting disease, which has been plaguing the deer population of northwest Arkansas since 2016.

Chronic wasting disease is a prion disease that targets the brains of animals in the deer family, including the white-tailed deer, elk and other cervids in Arkansas. It was first reported in wild deer populations in the 1980’s and Arkansas began preventative measures in the early 2000’s.

“It’s a prion, and so – we all have proteins in our bodies. For whatever reason, the body will cause a protein to misshape, and when it does, it has the ability to make other proteins around it to misshape, and then they start congregating and making these chains, and at some point the chain breaks, so now you’ve got two chains and they start making all the other proteins look like them,” Gray said, explaining the disease.

Prion diseases eat holes in the brains of those infected, leading to degeneration of their cognitive functioning, behavioral changes and eventually, death. CWD+ deer experience progressive weight loss as they eventually stop eating entirely; they are also known to drink and urinate excessively, exhibit a lack of fear in humans and grind their teeth.

“The eyes are real hollow,” Gray said. “They’ll have this A-frame stance to them … their head will be low, a lot of times their ears will be flat, and they’re just standing there salivating this real thick drool.”

CWD can be transmitted between deer directly, through animal-to-animal contact, or indirectly, through environmental means. For example, if an infected deer licks a mineral lick, any other deer that lick it are also at risk for becoming infected.

CWD+ deer have thus far only been found in northwest Arkansas in our state; however, some have also been found in Issaquena County, Mississippi, which touches the borders of Arkansas and Louisiana. Gray said that could be of concern for Union County residents.

In 2002, Arkansas banned the out-of-state importation of cervids that were to live in captivity; in 2006, they stopped issuing permits for new captive deer farms. Carcass import restrictions were imposed in 2005 and strengthened in 2013.

The state has also begun surveillance efforts, leading to the 2015 discovery of the state’s first case of CWD. Since 2016, 619 cases of CWD have been found in white-tailed deer and elk in the state, out of 19,279 cervids tested.

“It appears that mule deer are very sensitive [to infection], elk are more resistant and white-tails are there in the middle,” Gray said. “So depending on what species you are is where you fit on this scale of resistance.”

Now, Gray said, the state is working to determine the genetics of white-tailed deer in order to determine whether there are any further preventative measures that can be taken. The Game and Fish Commission is working with similar agencies in other states to undertake a prion typing study at Colorado State University.

While Union County is not currently in a risk-zone for CWD+ deer, they have been found as far south as Scott County, and there is thus a possibility that the deer could migrate further south.

The Arkansas Game and Fish Commission has set up a way for Union County residents to have any deer they kill this season tested for CWD. There is a freezer for hunters to drop off deer samples at the Union County Sheriff’s Office; the commission will test samples left in the freezer and report back to the hunter if the animal is found to be CWD+.

“You open the lid and there will be an instruction sheet for what to do. You cut the head off, bag it, fill out the tag – you keep part of the tag – and put it in the freezer … and if it’s positive, you’ll get a phone call from me or one of our staff. If it’s negative, you won’t hear from us – you’ll have to go online. You’ll have a number,” Gray said.

It takes approximately 7-10 days to test the deer, and Gray said it could take up to two weeks before hunters receive their results, depending on the number of samples submitted to the commission. Testing is free and available in all Arkansas counties.

There is not currently scientific evidence to suggest that eating infected venison will result in the transfer of the disease from a cervid to humans. However, Gray recommended against it, noting that studies have shown the disease to transfer to some species of nonhuman primates after they ate tainted meat.

“Each individual has to make that decision on whether or not they’re going to eat that animal or not,” he said.

Gray said the commission hopes to develop immediate CWD tests that hunters will be able to take with them during hunting season, but that currently the technology for such a test does not exist.

He said hunters should report sick or dead deer and elk that they suspect could have CWD by calling 1-800-482-9262. More information about CWD can be found at agfc.com/cwd.