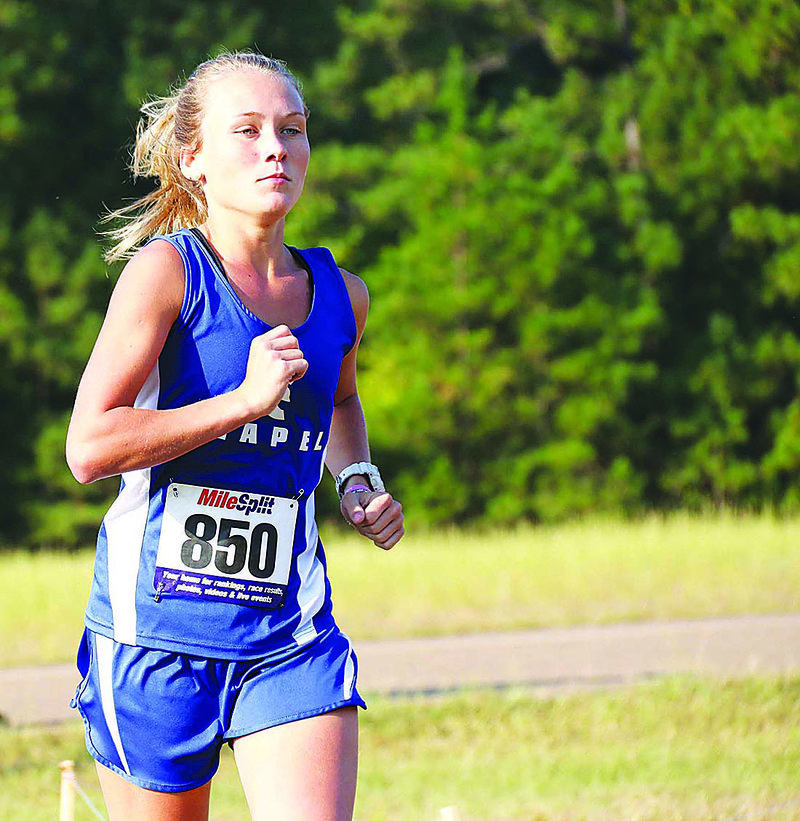 Parkers Chapel’s Ali Looney seized control of the race early and, literally, never looked back as she cruised to the senior girls’ championship of the inaugural El Dorado Wildcat Invitational, which was held at the South Arkansas Regional Airport.

Looney dominated the 5K, winning in a time of 21.59. Her margin of victory was more than a minute over the second place time of 23:09.

“It feels good. I’ve been working hard a lot the past few weeks. It really paid off today,” she said. “This week I’ve been training pretty hard because I’ve run here a few times. I knew the course and I knew what to expect. I also knew we were the first race, so I knew it was going to be cool. I had been looking at the times of the other girls who were going to be here today. I knew who my competition was going to be. So, my goal was to win. I’m happy. I’m proud of myself.”

“I told Ali whenever she crossed the finish line, ‘You went beast mode today.’ When she crossed that finish line, she still had a lot in her and she still had an awesome time,” said Parkers Chapel coach Justin Welch. “She’s been putting in a lot of time on her own. Her and Wes (Taylor) have been working hard to improve her time. It’s paying off and I’m proud of her.”

“That Looney girl just works hard,” said El Dorado coach John Koonce. “Her dad contacted me about her coming out and running on the course. You could tell she really wanted it and she deserves it.”

The senior girls’ race was the first of the day, thus, it was the first-ever championship awarded on El Dorado’s brand new cross country course. That made PC’s junior the first champion to be crowned at the course.

“That really didn’t cross my mind. But, that’s an awesome honor to have,” said Welch. “For Ali to do it representing Parkers Chapel, we’re very proud of her.”

The Lady Trojans had another medalist at the meet. Bella Frisby finished strong to place ninth in the junior girls’ division in a time of 12:15.87 over the 1.7-mile course.

“Bella has been doing an exceptional job in the junior high division all year long. She’s a competitor,” said Welch. “She has that competitive spirit in her. When she gets on that course, she wants to win it. When she starts putting in that extra time like Ali does, you could see her doing the same thing as what Ali is doing now. I definitely think her future is bright in the sport.

“I also thought Spencer (Frisby) ran really well today. You might not see it in the final results, but he did a really good job of improving his time.”

“I thought all the kids had really good times,” said Welch. “Coach Koonce, when he was having the coaches’ meeting, he said very few PRs are going to be set today because he said it was a legitimate 5K and it was pretty tight. But I really thought our kids ran really well on that course. I was proud to see that.”

As for the local meet, Welch said it was nice having a race in Union County. That could also account for some of the strong performances.

“It makes a big difference when the kids are not walking around like a bunch of zombies, having to get off a bus after riding an hour-and-a-half. That helps a ton,” he said. “I was glad that El Dorado put this event on. They did an awesome job running it. We definitely need to say thank you to them. I know the kids really appreciated being home by noon.”