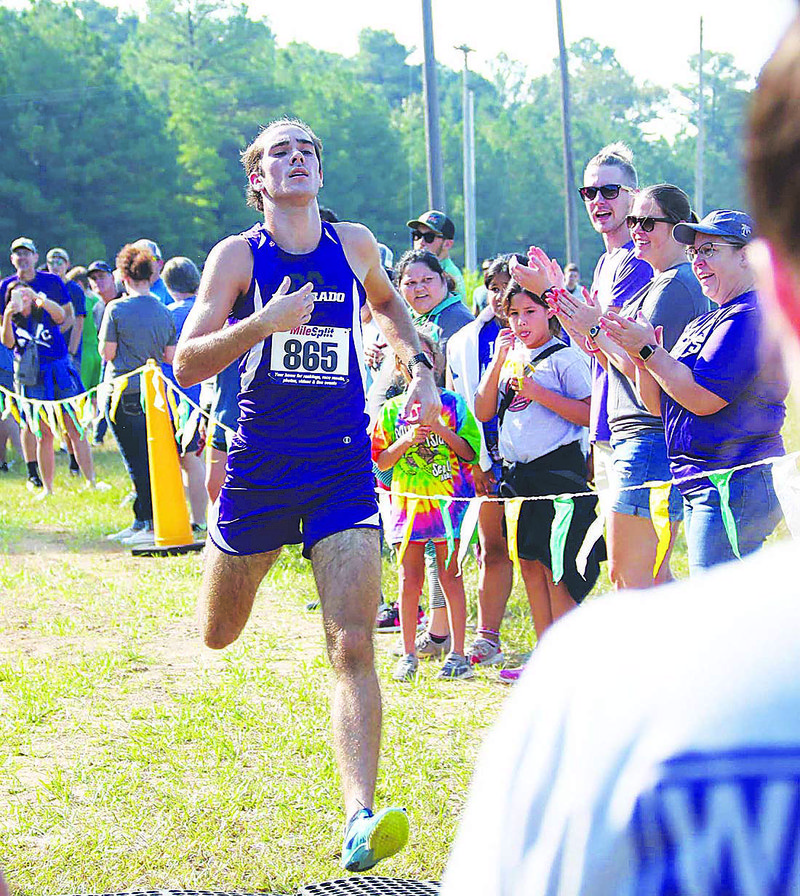 In what could be described as a story book ending, the first ever cross country meet held in El Dorado was won by …. El Dorado.

“I hope it is a good way to grow and advertise the sport to the young ones,” said El Dorado coach John Koonce. “We are trying to build to the point as a program that all four of the teams are bringing those trophies home on a regular basis.”

“The varsity boys pulled out a big win today when it wasn’t certain that we would,” said Koonce. “To lose a guy like Hayden McDiarmid for the year and step up and beat a team that has been nipping at your heels says a lot about the boys’ resiliency.”

Genoa Central’s Jones won the race with a time of 17:15, which set a school record and could be considered the course record as well. His teammate, Caedmon Kyles was second in a time of 17:36.

“Those two dudes from Genoa are great runners and (Cunningham) worked hard to chase them,” Koonce said. “The winner of the race has a very good chance to win the overall meet for 3A this year. Today he broke the Genoa Central 5K record and that is a big accomplishment because that is a top of the line program and it has been for over 40 years. “JD Halstead got back to where we need him, and he paced Rodrigo Torres to the best race he has ever had. Eloy and Calvin rounded out our top five and we wouldn’t have won that trophy without their performances.”

“I was very happy with our varsity girls today. They beat two teams that they haven’t been able to beat this year,” said Koonce. “Melanie Miller had another good meet and I loved her finish. She tracked down a few at the end to make sure she picked up an individual award. Addy Taylor had another good race. She has been plagued with calf issues for the past month, so that has held her back a little. But she continues to compete hard every day. Eliza, Priya, and Iankel also stepped up. Those first two PR’ed in a big way today.”

“(Black) continues to have a great start to her running career,” said Koonce. “Her and Carly Meadows are cheerleaders and they had a lot of obligations this week. They went above and beyond and practiced on their own time when they couldn’t be at our practices and that’s why they had the success that they did.”

“(Neugebauer) continues to work his tail off and it was great to see him pick up his first individual medal,” said Koonce. We knew it was coming and it was great for it to happen at our first home meet. Our second runner was Nic Harvey. He just missed out on medaling, but it is coming for him too. He had a great strategy for this race, and it led him to a strong finish. McMillon, Wilson, and Vartenian had great races today. We were without Cooper Connor who is out for the season with a broken collarbone and Hunter Nutt with an ankle injury. Jay Reep ran but had an asthma flare up so had to pull out.”