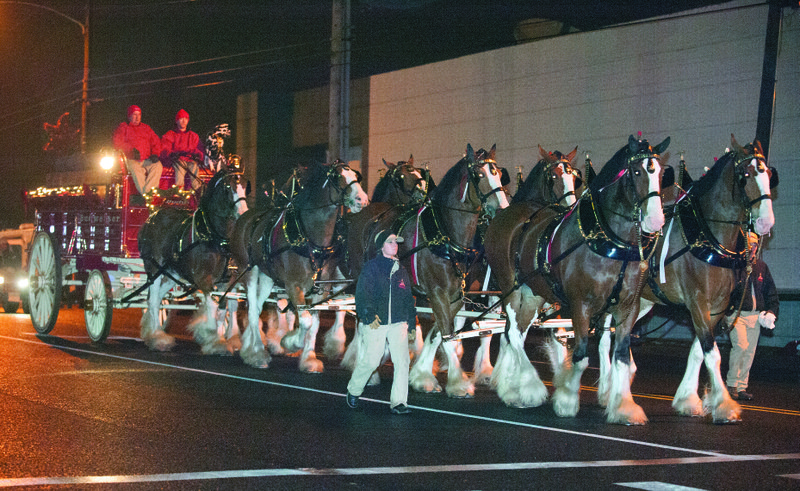 On Prancer: The world-famous Budweiser Clydesdale Horses prance along North West Avenue as the featured attraction in the annual Christmas Parade. The iconic show horses last visited El Dorado in 2014.

There are only a few days left to sign up and enter "A Nutcracker Christmas," the theme for the 40th anniversary of the El Dorado Christmas Parade.

The Christmas parade, touted as the largest in South Arkansas, will roll at 7:30 p.m. Dec. 12 and will feature the iconic Budweiser Clydesdales.

The deadline for parade entries is 4 p.m. Wednesday.

The parade averages about 100 entries — including a variety of decorated floats, cars, trucks, motorcycles, ATVs, marching bands, walking groups and horseback riders — each year and while entries have been streaming in the past several weeks, organizers said they anticipate an uptick as the deadline draws near.

"We've got quite a few. They've been steadily coming in and we'd like to have a lot more," said Jaren Brooks, membership and events coordinator for the El Dorado – Union County Chamber of Commerce, which presents the annual Christmas parade.

Brooks said entry packets will be ready for pickup by Dec. 9 at the chamber office, 111 W. Main. The chamber is open from 8 a.m. until 4:30 p.m., Monday through Friday.

This year, the event was pushed from its traditional schedule of the first Thursday in December to the second Thursday to allow the parade committee to book the featured attraction: the Budweiser Clydesdales.

A few months ago, chamber officials announced that the world-famous show horses would not be available Dec. 5 but could make an appearance in the parade Dec. 12.

Respondents to an online poll that was conducted by the chamber overwhelmingly favored rescheduling the parade to accommodate the Clydesdales' schedule and to help make the annual event "more spectacular."

Brooks previously said more details are forthcoming about the Clydesdales' schedule, including if the horses will be available for public viewing prior to the parade.

He shared other changes that have been planned for the parade this year.

For the first time, several on-the-street parking spaces will be blocked downtown during the parade, Brooks said.

He explained that because KTVE will be livestreaming the parade this year, organizers took extra precautions to make sure the event runs smoothly.

KTVE will also re-air the parade at 10 a.m. Dec. 14, and the broadcast will reach viewers in Arkansas, Louisiana and Mississippi.

"We are going to block off parallel parking on Main Street to help the parade flow better downtown and to make the route safer," Brooks said.

The parade will follow its customary route, starting in the area of North West Avenue and Griffith Street, heading south on North West Avenue, turning east onto Main and north onto Jefferson.

Once the parade turns onto Main Street, parallel parking will be blocked between North West Avenue and Jefferson and on Jefferson between Main and Elm.

Downtown El Dorado is one of several coveted viewing spots along the parade route.

Bleachers are typically set up on the east side of the Union County Courthouse to allow spectators a comfortable place to sit as the parade winds its way through the Union Square District.

Brooks said the parallel parking spaces will be blocked at noon Dec. 11, the day before the parade.

"There were some concerns with big 18-wheelers trying to turn in those areas and how close people are to them," he said.

"So, we're blocking those parallel parking spaces so traffic won't get stuck in that area and so kids and other viewers won't be right beside them as they come by," Brooks continued. "It's for safety. It's for viewing and for flow."