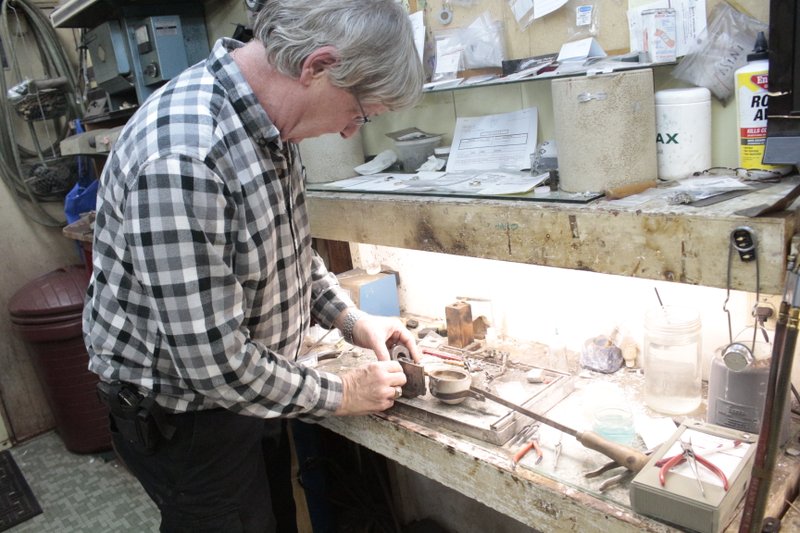 Joey Antoon demonstrates his jewelry making process. He first melts whatever metal he is using in the crucible to the right of his hands; then he pours the melted metal into the mold in his left hand. The metal is then drawn out before being shaped into its final form. - Photo by Caitlan Butler

It's the summer of 1976 and James Antoon III — Joey — is hanging the 'Antoon's Jewelers' sign on the store's new building at 1014 N. West Avenue. His friends are at Sonic across the street, hollering at him to "get to work!"

That was the third time the jewelry store moved to a new location. In 1955, James Antoon I, known around town as 'Diamond Jim' after the Gilded Age businessman who he emulated in his dress, bought Ruby Baughm's El Dorado jewelry store location after she was killed in an automobile accident. That exercise in entrepreneurship has since become his family's 65-year legacy, one that is now coming to a close.

Diamond Jim was known to be a lady's man. If he wasn't really, he did a good job hiding it. In his pinstriped double-breasted suit and fedora, he was known for his good-natured flattery, making the women who walked into his store feel lovely in his jewelry.

"He was a jack-of-all-trades, and it didn't take him long to learn to work on watches and jewelry," John said. "And he was a salesman."

Before buying the store, Antoon I served in the United States Navy in the Philippines during World War II. He was awarded the Navy and Marine Corps Medal for his heroism. His first piece of jewelry was a bracelet made of carved seashells, a callback to his Navy days.

"My grandfather was drafted out of Corpus Christie, Texas," Joey said. "A decorated war hero, he came back a little bit shell shocked. … He worked on a ship, the USS Achilles. It was a tank landing craft they converted into a machine shop."

The Antoons were all steamfitters before they became jewelers. Antoon I was also a quartermaster when he was in the Navy, perhaps inspiring his later smart style.

When Antoon I first opened the jewelry store in '55, it was located in a downstairs storefront in the Randolph Hotel. The Haywood, currently under construction downtown at 110 W. Locust St. downtown, sits where the Randolph Hotel used to.

James Antoon II took over the store in 1969, after his father died of pancreatic cancer. They moved locations to 108 E. Elm Street around this time, where All About Flowers is now located.

Antoon II was community-minded, getting heavily involved in the El Dorado Jaycees. Before that, Antoon I was involved with the El Dorado Civitan Club.

During that time, both Joey and his brother, John, worked weekends at the store with their dad, making trophies, polishing jewelry and cleaning the shelves.

In 1977, the Antoons officially opened at what would be their final location on North West Avenue, and in 1981, after their father passed away, Joey and John took over as president and vice president, respectively.

For almost 40 years, Antoon's Jewelers has been in the hands of the third-generation of family jewelers.

Joey was studying for his gemologist certification when his father passed away in a plane crash at the start of the '80s; he returned home early from the course and took over the store. John was working as a machinist before he joined Joey.

John was trained in watchmaking, while Joey began making his own jeweled creations, both of which have been some of the most popular attractions at the store.

"Watchmakers are a dying breed now," Joey said. "The younger millennial doesn't want to put that kind of money into fixing grandpa's watch unless you just have a great affection for your grandfather. Everything in our industry has changed over the years."

Antoon's Jewelers isn't just a store for big spenders. A lot of times, people visit just to see the Antoon brothers, and before her passing, their mother. Their friendly faces have made the store known not just for their wares, but for their family atmosphere.

"People don't come in here to buy, they come to talk to him," Bettie Wilson, the store's bookkeeper, said of Joey.

Right before he took over the store, Joey was married to his wife of 39 years, Marsha Pickett, now Antoon. Three years ago, John reconnected with an old flame, Catherine Pickett, Marsha's sister, and the two were married.

In 2017, the brothers' mother, Beckie Antoon, died at 82 years old. Their inheritance helped to clear their debts, though the loss is still tough on them.

"My mother's dream was to die in the saddle, work here until she died. This was her social outlet," Joey said. "My mother was a champion saver. … So when she passed away, she has three children and everything got divided equally, and that wiped our slates clean, as far as what we owed to the world."

In 2014, Joey suffered severe burns in an accident; it took almost two years for him to fully recover. He also has two stents in his heart, has been T-boned in a car accident and somehow maintained his vision after sticking a screwdriver in his eye socket by accident.

Now that life has slowed down again, Joey said he's realized that there is more he'd like to explore in life, and that the same goes for John.

"Every day that I wake up, I think 'is this the way I want to live my life?' My retirement is based on that," Joey said. "I'm looking to live a little simpler life."

"My brother's looking to get to the water and the woods," Joey said. "He's an outdoorsman. He would be the guy that goes and lives off-grid in the middle of the mountains and melts the snow water to drink and kill animals to survive. He's an outdoor naturalist kind of person."

Joey said his brother John plans to move to Conway to live with Cathy, a traveling nurse once they close the store; until now, they've been making the two-plus hour drive almost every weekend to see one another. Now he'll have the opportunity to spend more time with his wife and more time to spend outdoors.

"My brother owns 10 boats — everything from white water raft, to kayaks to canoes to fishing boats — you name it. That's his thing, is working on and fixing boats and collecting them," Joey said.

"I'm a carpenter with an artsy side," he said. "I see art in everything I look at."

Five years ago, he learned to play guitar, and now he has weekly jam sessions with his 12-plus piece acoustic band, the Broken Turtles.

"I play in my living room, basically," he said. "In the beginning, when it was just a small quartet of people, we played Mayhaw Festival … I surround myself with musicians that are better than me, but I like to wail. I'm not a scaredy-cat, I will sing my heart out. We do a lot of blues, old rock 'n' roll, we're all over the place. … I want to get on the stage at La Piazza."

He also wants to get back into performing. A long-time patron of the arts, he and Marsha have starred in or directed several productions for the South Arkansas Arts Center, and when they're not on stage, they've helped raise money for El Dorado High School's Thespian Troupe 42.

"I'm ready to get back into doing some directing and maybe some acting again," Joey said. "If it's in a 250-mile radius of here, we'll go. It's one of the things we do on our anniversary, is go and find a play somewhere, then we'll watch it and dissect it ­— say, 'okay is it the play, is it the people in the play or is it the director that's fallen down on the job of making it really good' — then we tweak it and bring it back here."

While Joey has loved the jewelry business and his customers, he said he feels like now is the time he needs to focus on living his life to the fullest. For someone who sees art in everything, as he does, that means focusing on his creative talents, giving back to his community and seeing the country with his family.

"I'm so grateful for 65 years of business doing this. It's just too much fun. ... I can't think of a better job except maybe working in a women's shoe department," Joey joked. "I'll miss this business … We'll stay in El Dorado. I love El Dorado; I love the smallness of El Dorado, and I love the people in El Dorado."

After 65 years, Antoon's Jewelers will close after Dec. 31. Until then, they are having a close-out liquidation sale. Known for their unique gift section and handmade, original jewelry, the closing will be a loss for the community; but we can rest assured that this won't be the last we see of the Antoons.