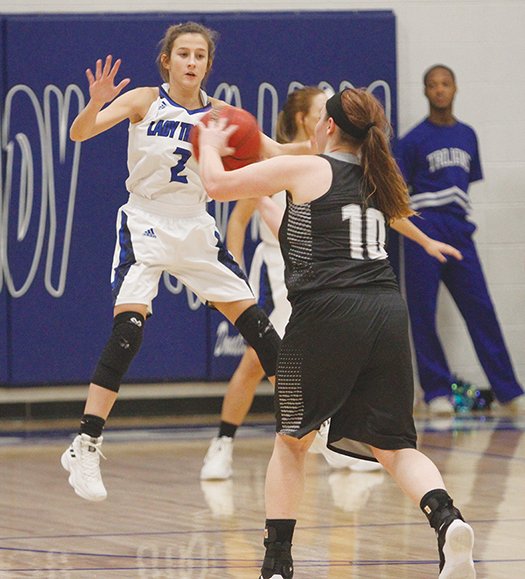 Terrance Armstard/News-Times In this file photo, Parkers Chapel's Macie Wood defends during a game against Bearden in the 2018-19 season.

Parkers Chapel graduated just one player (T.K. Burson) from a team that advanced to the regional tournament last season.

The Lady Trojans, led by sophomores, finished strong at 14-17 but hope experience will lead to a faster start this season.

“Last year we qualified for regionals. I felt like we were really deserving of a trip to the regionals because we fought really hard in the district tournament,” said Coach Justin Welch.

“We ended up going in as a sixth seed and ended up getting in the top four. We’re hoping to build off of that this year and go into the regional tournament with a better seeding, so we have a chance to extend our season even more. Make it to the state tournament is what we really want to do.”

Most of the players competed in tennis, golf and/or cross country in the Fall, which limited what the Lady Trojans could accomplish in the off-season workouts.

“I had eight that were non-tennis players. We don’t get our tennis players until tennis season is over, which was about three weeks ago,” Welch said.

Still, PC opened the season with a 50-49 victory at Nevada and signed up to play in a rugged tournament at Mount St. Mary Academy.

“Experience is a big advantage. Last year we were relatively young with, pretty much, all sophomores. They were able to experience a lot. You learn from experience more than anything,” said Welch.

“We’re hoping this year we don’t go into ball games with that deer in the headlights look like we did in the first half of the season last year.

“Toward the end of the season, you could see we were starting to hit our groove and we were playing at a different level.

“We’re hoping to build off of that this year and start off where we left off.”

The Lady Trojans didn’t get any taller over the off-season. Kamryn Cross, the team’s lone senior, will be one of the top inside players at 5-foot-8.

She will join 5-11 junior Taylor Fortune as primary glass cleaners.

“My only senior this year, Kamryn Cross, she played a lot of minutes for us last year. She started the majority of the games,” said Welch.

“She’s not the tallest person on the court but, most of the time, she’s the most athletic from our team’s perspective. She’s got some jumping ability. She works hard on defense and she can score around the basket.”

Fortune was the team’s leading rebounder a year ago and second-leading scorer.

Welch also plans to move junior Drue Thomas closer to the basket. Thomas took over as the team’s primary ball handler in the middle of last season.

“I really had Drue playing out of position last year. I kind of put the ball in her hands. She’s not a true point guard. That’s not taking anything away from her. Just naturally, she’s not a point guard. She’s more of a shooting guard,” he said.

“She’s a little more physical on the inside, too. We want to use those qualities to make an advantage for us. She’s real strong and she’s able to get inside and maneuver and finish around the basketball because of her strength.”

Burson and Thomas ran the point last season. Welch will start with the trio of juniors Macie Wood and Lexi Moss and sophomore Tess Monteith at the position this year.

“I’m hoping Tess and Lexi and Macie, between those three, by the end of the season, we’ll be solid there,” he said.

Junior Ali Looney returns to the starting lineup, where her outside shooting could spark an offense that featured the 3-point shot last season.

PC will look to shoot the 3-ball again this year.

“That definitely helps open things up on the inside, when you’re able to hit shots from the outside, it brings that zone out. Last year, I felt like a lot of people packed it in the lane and dared us to shoot. We’re hoping to improve on that this year,” said Welch.

“There are some cases, especially against match-up zones, we can go five wide and every one of them can shoot.”

“We’ve got to take care of the basketball better than what we did last year.

“I really think we’re going to have to control the turnovers and keep that down to a manageable level.

“And, defensive rebounding is going to be huge. Even though we’re small, we’re going to have to block out and get those rebounds.”