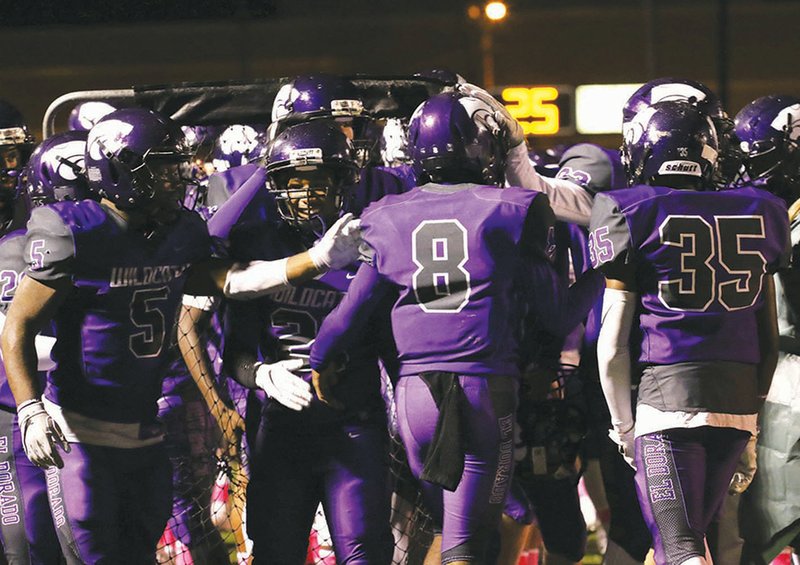 Siandhara Bonnet/News-Times Teammates congratulate El Dorado's Jackie Washington after he scored a touchdown during the second half of the Wildcats’ game against Siloam Springs last Friday at Memorial Stadium.

El Dorado will carry a three-game win streak into the 6A State Playoffs next week after finishing the regular season with a 41-2 victory over Little Rock Hall at Memorial Stadium. The Wildcats improved to 4-6 and will travel to Jonesboro next week.

The Warriors finished with a 2-8 overall record.

El Dorado built a 35-0 lead in the second quarter. The Wildcats triggered the mercy rule on Branden Moore’s 5-yard touchdown run with 3:13 left in the third.

“Took care of business in the first half. I’m really proud of our team,” said El Dorado coach Steven Jones. “We were able to get everybody in the game and rewarded a lot of those guys that don’t get to play a lot. Some of those guys we put on our scout team all week and are a big part of our team. They got to have a lot of fun tonight. I’m proud of our overall effort. The great thing was, our first-team guys were invested in the game and watching and cheering those guys on.”

The Wildcats turned the ball over on a fumble to end the game’s first drive. But, El Dorado’s Will Artis intercepted a pass at the 37. Hicks capped the 8-play drive with a 5-yard touchdown run. Greysen Hubbard booted the extra point with 2:47 left in the first.

The Wildcats’ defense changed the scoreboard second later when Jacoby Hankton picked up a backwards pass and returned the fumble 11 yards for the touchdown. Hubbard added the kick with 2:31 left in the first.

El Dorado’s defense rose up again when Quentin Frazier recovered a fumble at the 1-yard line after a high snap on a punt. Devunte Yarbrough scored on the next play for a 21-0 lead with 11:15 left in the second.

The Wildcats would follow with a 54-yard drive, capped by Shepherd’s 23-yard touchdown pass to Washington with 7:56 left in the second.

The Warriors botched the ensuing kickoff and took over at their own 3-yard line. El Dorado forced a fumble on the next play with senior linebacker Jacove Lewis recovering the ball in the end zone for the touchdown. Hubbard’s PAT pushed the lead to 35-0 with 7:42 left in the half.

El Dorado began to sub out and Hall started to find some success on the ground offensively. But it took a miscue by the Wildcats to get the Warriors on the board. El Dorado punter Dave Carruth had trouble with a bad snap and ran out of the end zone for a safety with 2:12 left in the second.

The half ended with El Dorado holding the 35-2 lead. The Wildcats triggered the mercy rule when the second unit drove 63 yards in 12 plays. Sharmon Rester converted a fourth-and-2 with a 7-yard run before Moore scored with 3:13 left in the third quarter.

El Dorado will be the No. 5 seed in the playoffs and will face Jonesboro, the No. 4 from the East. The Hurricane is 7-3 on the season after a 34-25 loss to Marion on Friday.