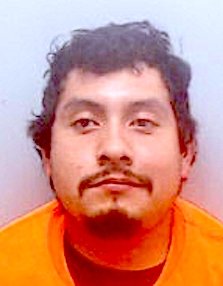 Bond was set at $15,000 Friday for an El Dorado man who appeared in 35th District Judicial Court on several charges stemming from a hit-and-run accident that led to the recovery of a stolen handgun.

Pedro J. Martinez, 23, of the 600 block of Cargile, was arrested Nov. 7 for theft by receiving, DWI, possession of marijuana, leaving the scene of an accident with property damage and no driver’s license.

Martinez is scheduled for another appearance in district court Monday on a warrant for enforcement of fines.

Police responded Just after 8 p.m. Nov. 7 to a report of a hit-and-run accident in the area of North West Avenue and Fifth.

The complainant said Martinez struck his vehicle and he followed Martinez, who left the scene and drove to his residence, according to a police report.

Police said that when they arrived at Martinez’s residence, they heard Martinez tell the victim that he did know that he had struck a vehicle.

Martinez appeared intoxicated, police said, noting he smelled of alcohol, he was swaying and his speech was slurred. They also said Martinez admitted to having drunk a “couple of beers.”

Officers said a portable breath test showed that Martinez had a blood-alcohol lever of 0.125, which exceeded the legal limit of 0.08 for driving in Arkansas.

During a search of Martinez’s vehicle, police said they found a handgun which officers learned had been reported stolen to the Union County Sheriff’s Office, and a back containing three grams of marijuana.

El Dorado police and firefighters responded Nov. 6 to a report of a single-vehicle accident that resulted in property damage in the area of North West Avenue and Parkway.

Emergency responders were called to the scene just before 7:30 p.m.

Few details had been released about the accident.

A woman was reportedly in the drive-through line at Domino’s Pizza, 1300 N. West Ave., when she experienced a medical episode and lost control of her vehicle, which thrust eastward across the avenue and through a fence at the Boys and Girls Club of El Dorado, 1245 N. West Ave.

The vehicle knocked down a portion of the chain-link fence on the west side of the club.

“We responded to it. One of the occupants in the vehicle had a medical condition and they assisted with loading the patient into the ambulance,” said Fire Chief Chad Mosby.

The woman was transported to Medical Center of South Arkansas for treatment.

Mosby said the fire department cleared the scene at 7:52 p.m.