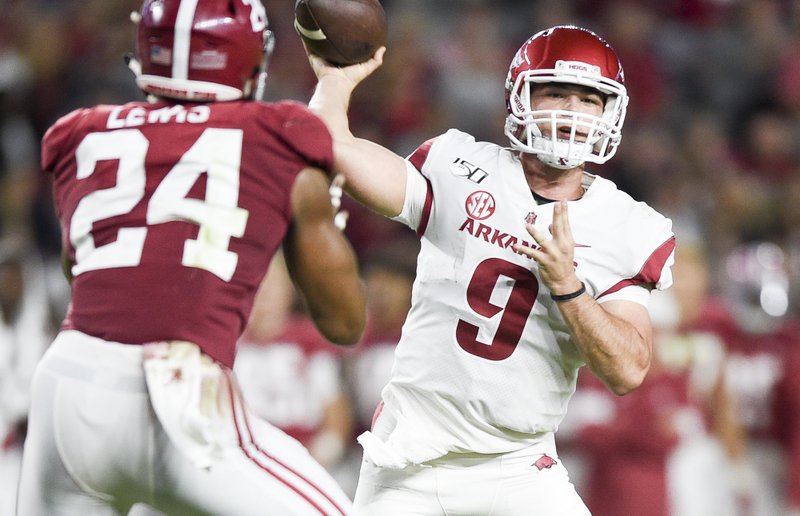 NWA Democrat-Gazette/Charlie Kaijo Arkansas quarterback John Stephen Jones (9) throws a pass during the fourth quarter of Saturday's game at Bryant-Denny Stadium in Tuscaloosa, Ala. Jones was 6-for-7 passing for 49 yards and the Razorbacks' only touchdown of the day.

FAYETTEVILLE — The University of Arkansas’ senior poster for the football team this week is a flashpoint for so many stories.

The Razorbacks will honor 17 seniors before Saturday’s 11 a.m. kickoff against Western Kentucky, the first meeting between the programs, in the on-campus finale.

Arkansas, 2-7 and eliminated from automatic bowl eligibility, will try to break a six-game losing streak. The Razorbacks haven’t celebrated a victory since “Club Dub” was rocking after a scintillating fourth quarter in a 55-34 win over Colorado State on Sept. 14.

Western Kentucky (5-4) is aiming to get bowl eligible at the expense of a Power 5 team that has already lost at home this season to San Jose State.

The UA poster, titled “2019 Seniors” followed by “Thank You” in all caps prominently features the few main contributors from the class, most of whom survived the rugged transition from the Bret Bielema era and two down years under coach Chad Morris.

The older players have seen a large youth movement taking place on the roster with freshmen and sophomores dotted up and down the depth chart.

Nowhere will that be more prominent on Saturday than at quarterback, where redshirt freshman John Stephen Jones and true freshman KJ Jefferson have been tapped to split the game reps for the first time this season.

Morris, speaking on his radio show “On the Air with Chad Morris” on Wednesday, talked about receiving supportive letters and food gifts this week after a listless showing in last week’s 54-24 loss to Mississippi State. He segued those remarks into a state-of-the-team summary.

“I’m built for this,” Morris said, a reference to the rebuilding job he had in motion at SMU, which is battling for a New Year’s Six bowl berth.

“It’s tough times right now but there are some positives out of this. There’s a lot of young guys that are getting incredible experience that is eventually going to pay off. So the best is yet to come and there’s still going to be some great days this year.”

The Razorback veterans would like to see that, and to inject hope into a fan base that has been stewing and souring for most of the last eight years.

Fifth-year senior Jamario Bell, who was on winning Bielema teams in 2015 and 2016, was asked what he’d like to see from the fans on Saturday.

“I just want the fans — I know it’s tough for the fans,” Bell said. “We just want all the fans to come out because this senior class — the whole team, whole organization, strength staff, coaching staff, everyone — we really want to come out and win. We’re trying. We’re working hard.”

Senior linebacker De’Jon Harris said the Razorbacks need to show the fans something.

“I would just like to give the fans the best show,” Harris said. “It’s not what we want to see from the fans, it’s what the fans want to see from us. I just want to go out there and put the best thing on the field and try to turn this thing around as fast as we can.”

Morris and his staff have to be feeling pressure to show improvement down the stretch in Year Two with the Razorbacks 4-17 under his watch.

Defensive tackle McTelvin Agim, a senior captain along with Harris and T.J. Smith, said the Razorbacks are understandably building for next year.

“They keep coming back and coming to work and giving everything they’ve got,” he said. “They deserve everybody’s best. They deserve every one of our staff, coaches, underclassmen. They deserve their best. Our fans, come out and support them. Again they are pouring their heart and soul out.”

Featured front and center on the senior poster are Agim, Harris and kicker Connor Limpert, the most productive players from the class who spent their entire career with the Razorbacks.

“It went by fast, man,” said Harris, who needs 25 tackles to have his third consecutive 100-tackle season. “I was … kind of reminiscing about when I first got here and when I basically started playing my sophomore year. I just tried to tell the young guys to take advantage of every opportunity y’all get, because it’s going to go by fast, especially when you’re playing and you don’t redshirt.”

The remaining players recruited by the Bielema staff has been dwindling since the arrival of Morris and his staff, who came on board in December of 2017, the first year the NCAA allowed December signing periods.

“I think it’s like four or five us us that’s actually playing,” Harris said, referencing the seniors. “The rest of them were redshirted or they got hurt.”

The program is en route to its third consecutive losing season.

“A lot of down ones,” Agim said. “I probably had one up one my freshman year. But it’s still been good. It’s still a blessing. I wouldn’t change it for the world.”

Jackson is included in the poster. O’Grady is not. Neither is grad transfer quarterback Ben Hicks, who opened the season as the starter but has yielded along with junior transfer Nick Starkel to Jones and Jefferson. Hicks elected to not be involved in senior day ceremonies, a team spokesman said.

The Razorbacks have lost at least 33 scholarship players who had eligibility remaining since Bielema’s departure.

One of them is Ty Storey, the Charleston High School product who was in the program for four years before leaving for Western Kentucky as a graduate transfer.

He’ll start for the Hilltoppers today.

Western Kentucky is only a 1.5-point underdog, meaning they would likely be favored at a neutral site.

“It’s just an added bonus that it’s an SEC opponent and playing a Power 5 school,” Western Kentucky coach Tyson Helton said about the game. “And if you can go down there and get a win, it says a lot about your program.

“I expect them to give us everything they’ve got. It’s going to be a great challenge for us. They’re a very talented and young football team. You do see where they have a lot of talent, though. They took Texas A&M to the stretch in Dallas and really had an opportunity to win that game. … We’ll have to play our best game, for sure, in all three phases to have an opportunity to win. But I think if we do that, we’ll be in the game and give ourselves a chance to win the game.”

For Arkansas, consistent play and depth has been an issue at many positions, adding to the struggles seen and experienced by the Arkansas veterans.

The class has a 15-31 record (.326) in the last four seasons. Their winning record of 7-6 in 2016 was dampened by giving up two big leads in their last two games against Missouri and in the Belk Bowl against Virginia Tech.

It has felt like a continual slide since then.

Morris said the young quarterbacks have added an energy quotient to practice this week.

“Just to see all of them just come out there [Tuesday] and put forth the energy and the effort at practice, it was really a good day.

“I think a lot of that had to do with the fact that … it’s about pride. It’s about coming out and responding, responding the right way. … These guys keep giving the effort in practice, and I’m excited to get back out there Saturday.”