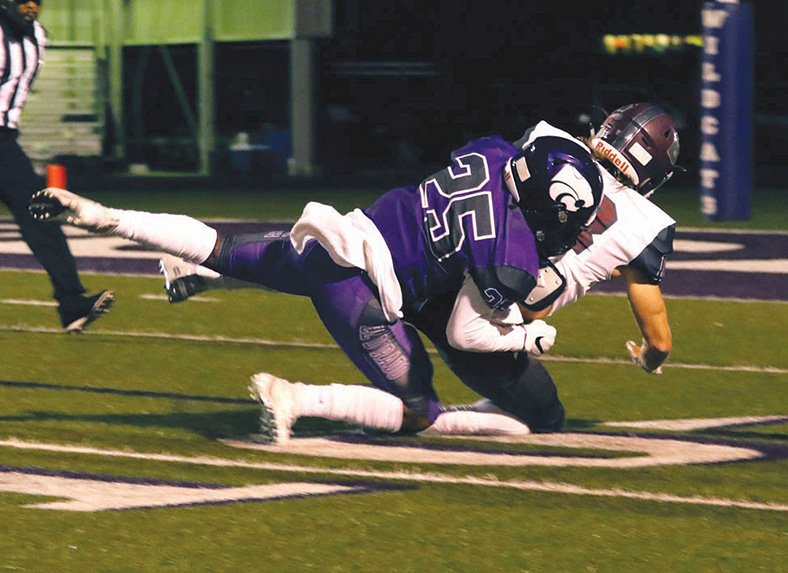 Although Coach Steven Jones’ squad has clinched a playoff berth, he said there’s still plenty on the line.

“Mathematically, I don’t know if we’ve 100 percent sealed the five seed. I know with a win we will be the five in the West,” he said.

The five seed would open the playoffs at the East’s No. 4 seed with the winner taking on the West’s conference champion in the second round.

The sixth seed would face the East’s No. 3 with the winner taking on the West’s runner-up.

Benton has pretty much sewn up the West title.

Greenwood and Lake Hamilton meet for the No. 2 seed tonight.

As far as the East, Jones said the league’s No. 2 through 5 spots are still to be determined.

“It is wide open in the East,” Jones said. “Jonesboro is sitting as the conference champ going into Week 10. They could fall as far as the four. They could be a potential opponent. Their two through five are up in the air.”

El Dorado (3-6, 2-4) has zero control over what happens in the East. The Wildcats are focused on a Hall team that is mired in a seven game losing streak.

“Offensively this year, they’re still trying to find their identity going into their last regular season game. They’ve struggled to move the football. It really changes how we prepare because we have to be ready for almost anything with what we’re seeing,” said Jones.

“We have a pretty good idea of what they’re going to do defensively. They have some guys that fly around and make plays.

“They’ve been in some games this season and just had a string of bad things happen throughout the course of the game.

“They’ve been competitive. They have guys that play hard. We’re looking forward to another conference challenge.”

Hall’s football struggles have gone on for nearly a decade. The Warriors have lost 61 consecutive conference games.

Jones doesn’t believe there’s any chance his team will look past Hall for a peek into the playoffs.

“I think our early-season struggles probably help us maintain focus each week and not look ahead. Early on, we may have overlooked an opponent. Our kids see that came back to hurt us,” he said.

“First two days of practice this week, we had very good focus on Little Rock Hall.

“Not a lot of discussion from our kids about playoff scenarios, this and that.

“We know we’re in there, but we want to play our best Week 10 and put together a good game against Hall.”

The Wildcats are coming off their best performance of the year, a 54-14 win at Russellville.

Jones said his team hopes to stay on the same path this week and will look to improve on all facets of the game.

“The things we are focused on going into Week 10 are challenges we’ve created ourselves. So, we’re trying to fix who we are, regardless of who we’re playing,” he said.

“We’re trying to go back to the basics, work on the little things and make sure we take care of not having little things go wrong throughout the course of the game. We’re emphasizing special teams and all of that.

“A Week 10 statement is what we’re looking for. We want to send out tape to the East and let them know, we had some struggles early in the season but we’re hitting our stride late and we’re rolling.

“We feel good about where we’re at and we think we can play with anybody.”

He said the keys to tonight will be early down success on offense with limited penalties.

Defensively, the Wildcats hope to continue the trend of creating turnovers and send the seniors home happy on Senior Night.

“We’re excited to play our final game at home this season. We look forward to a big crowd. We’re excited about Senior Night,” said Jones.

“We know we’ll have family members in to watch seniors play that don’t always get to go to the game. Our team is excited to get out there and put on a show.”