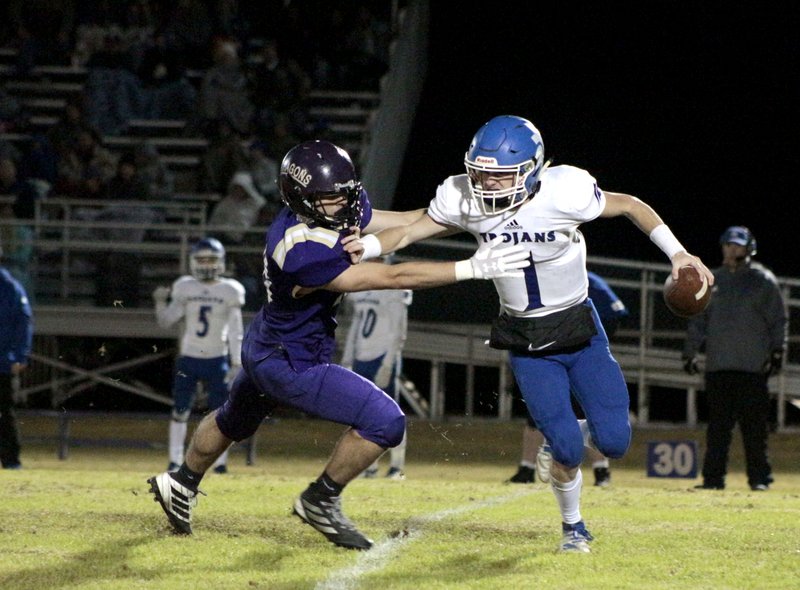 Parkers Chapel quarterback Caleb Jacobs attempts to break free from Junction City's Tate Barnett during the Dragons' 64-0 win over the Trojans. Junction City clinched the district title with the win.

JUNCTION CITY – Junction City built a 56-0 halftime advantage and cruised to a 64-0 victory over Parkers Chapel on Thursday. The victory clinched the conference championship and top seed from the 2A-8.

The second half was played with a continuous running clock.

Junction City coach Brad Smith was asked what the regular season title meant to his Dragons.

Defensively, the Dragons corralled PC quarterback Caleb Jacobs holding the senior to 9-of-17 passing for 47 yards.

“I thought the defense was excellent. I know once we got ahead, they quit using (Jacobs). But he was a challenge,” said Smith. “Nobody has put the clamps on him. We preached all week, contain him, make him stay in the pocket. Everybody’s been trying to hit him real hard. Just get your hands on him and wait for help. Secondary, keep everybody in front of you and come up and deliver licks.

Parkers Chapel (6-4, 3-2) took the ball to start the game and went up-tempo, moving the ball to the Dragons’ 36 before turning it over on downs.

Junction City went 62 yards in three plays. Cook peeled off a 37-yard run before Hutcheson hit Devontay Gilbert on an 18-yard touchdown pass with 8:26 left in the first. The run for two was good.

Parkers Chapel turned the ball over on downs again, leaving the Dragons 40 yards from pay dirt. After a 1-yard run and a procedure penalty, Hutcheson connected with Gilbert again, this time on a 44-yard touchdown pass. Cook ran for the conversion and a 16-0 lead with 6:31 left in the first.

The Dragons’ dominance continued as Tate Barnett sacked Jacobs to kill another PC drive. Junction City scored on a one-play drive when Cook romped into the end zone from 27 yards out. AJ Ivory ran for the conversion and a 24-0 lead with 4:03 left, still in the first.

After another fourth down stop, Junction City took over with a short field and scored on a 39-yard drive. Cook would score on a 4-yard run and then run for the conversion for a 32-0 advantage with seven seconds left in the opening quarter.

Junction City made it 56-0 after Ivory’s 47-yard touchdown run with 5:42 left in the half. Ivory ran for the conversion.

The second half was over quickly with the running clock. The lone score was Ivory’s 5-yard touchdown run with 8:25 left in the fourth. Gabe Richard added the two-point conversion.

After what Smith called a “terrible offensive practice” on Tuesday, Junction City was unstoppable in the opening half.

“We were pretty sure we could move it on ‘em. We were very efficient, didn’t lay the ball on the ground. We may have had one bad snap. But we ran the ball well, threw the ball well. We want to run it when we want to and throw it when we want to. I thought we did both tonight,” said Smith, who sounded giddy about the start of the playoffs next week.

“Now, the real season starts. We just beat a really good team that’s going to go far in the playoffs. We did that two weeks ago, also. The top three in our conference are as good as anybody in the state.”