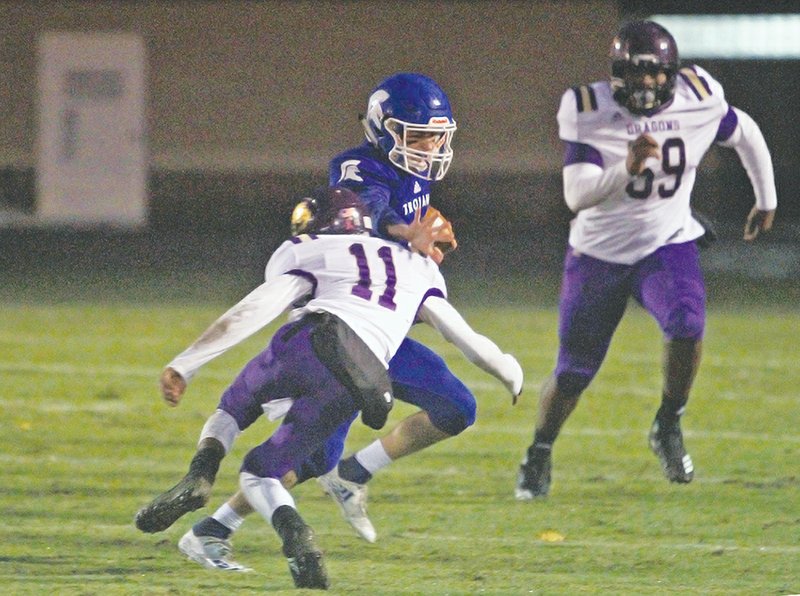 Junction City and Parkers Chapel are no strangers to competing against each other for championships in other sports, but never on the gridiron until tonight.

The Dragons and Trojans renew acquaintances at David Carpenter Stadium with the 8-2A title hanging in the balance.

Fresh off of a bye week, the Dragons (7-1, 4-0) can win the league title outright and clinch home-field advantage throughout the playoffs with a win.

The Trojans (6-3, 3-1) snapped a two-game losing streak last week by topping Strong, which clinched the No. 3 seed and a home game in the postseason for the first time in school history.

However, a win tonight would force a three-way tie with Fordyce atop the league standings.

For Parkers Chapel coach Elliot Jacobs, the Trojans are in essence playing with house money.

“I hope they’re buying in to what we’re telling them,” Jacobs said. “We’re telling them that for us, it’s just a game. The pressure is on Junction. They’re the ones that have to beat us to be the one seed. We have no pressure. We’re right where we wanted to be at the end of the season, so we’re going to go out there and have fun, execute and try to give them a ballgame.”

“You can tell that it just had to happen,” Smith said. “They’ve had some talent over there, and it looks like they finally put it together. The finally understand what they needed to do. They finally have their eyes on the prize, which I don’t know if they had before, but they look like they’re ready to do this.”

Both schools have prolific offenses led by senior quarterbacks.

Brady Hutcheson has thrown for 1,021 yards and 12 touchdowns with only two interceptions to guide the Dragons, who have won seven straight.

Senior running back Jakiron Cook has rushed for over 100 yards on four occasions, while fellow senior wide receiver Harlandus Frazier averages nearly an astonishing 30 yards per catch with 11 touchdowns with at least one score in every game.

“There’s a reason why they’re the No. 1 team in the state,” Jacobs said. “They can run the ball. They can throw it. The running backs are real good. The receivers have got some speed.

“You can’t say enough about the job that program has done and getting coach Smith to take over. It just keeps the ball rolling for them. Junction is the same old Junction. It’s going to be a tough test for us. We definitely have got to come ready to play to even have a shot to be in it.”

The Trojans counter with Caleb Jacobs, who threw four touchdown passes and ran for two more while accounting for 309 yards passing and rushing last week against Strong.

Five receivers caught at least one pass with three catching a touchdown with senior Preston Stivender catching three passes for 91 yards and two scores, while junior Trace Shoup had five catches for 93 yards and a touchdown.

Junior Edison Thompson had 80 yards rushing and a touchdown on just eight carries for the Trojans.

Smith added that his defense has a tough test with Jacobs’ ability to improvise and make plays both with his feet and his arm.

“Nobody has stopped him yet,” Smith said. “He’s run through everybody they’ve come across. He just creates with his speed and quickness. He creates havoc.”

But while the Trojans have scored 38 or more points in their six wins, the Dragons have been the stingiest team in the league as far as allowing points having given up just 26 points total in league play and 56 points overall in their last seven games.

“Our playmakers have to make plays,” Jacobs said. “We have to do a good job of getting them the ball in space and we’ve got to win one-on-one matchups.

“The way Junction plays defense, that’s going to be tough to do. They’re a big, physical group of kids. We’ve got our work cut out for us. We’re going to see how good we are.

“We had some success against Fordyce, but this is just a good defense, and we’re going to have to come ready to play to even have a chance to put points on the board.”

Smith said the Dragons focused on fundamentals during their bye week, and he is hoping his team can make yet another deep postseason run.

“We hope so,” Smith said. “At this time of the year, anything can get in your way. We’re working hard trying to keep our eyes on next week.

“Whatever comes up in the next week is what we’ll deal with.”

Although Parkers Chapel topped Strong in lopsided fashion, Jacobs said there were some miscues that needed to be corrected.

“Watching it live, I wasn’t too happy in the first quarter,” Jacobs said.

“Going back and watching the film, there were a couple of mistakes that we made, and we need to get those corrected, because those type of mistakes against Junction City or a team that we’ll see in the playoffs is going to hurt us.”

For the Trojans to have success, Jacobs said his team must protect the ball and create turnovers.

“Offensively, take care of the football. We’ve got to put points on the board when we have the chance,” Jacobs said.

“Defensively, create as many turnovers as possible. We’re not the defense that’s just going to stop you.

“Bend don’t break and try to create as many turnovers as possible.”

For the Dragons, Smith said there were three things his team must accomplish to down the Trojans.

“We’ve got to hold on to the ball, no stupid penalties and play position football,” Smith said.