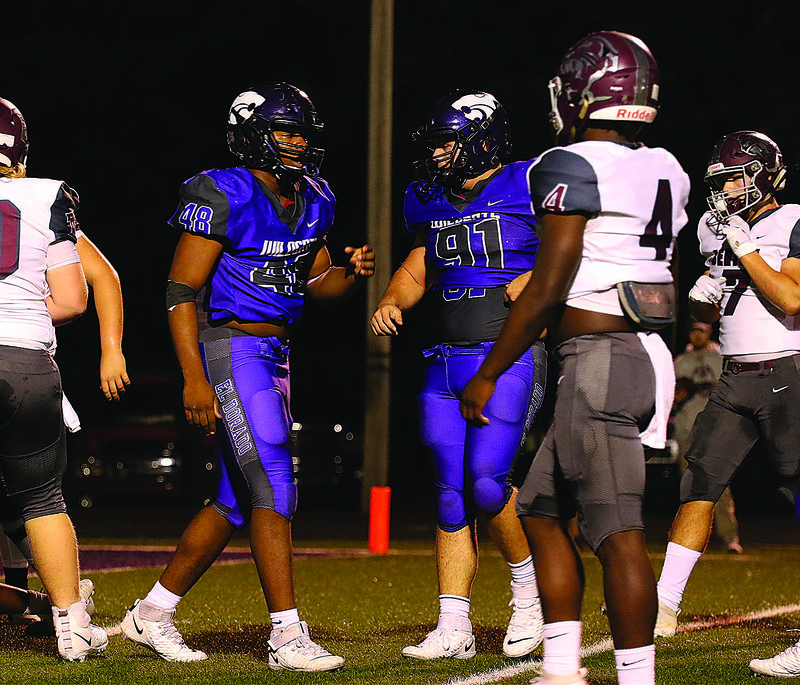 Last season, Quentin Frazier enjoyed a banner year, playing defensive end in El Dorado’s 4-3 scheme. He recorded 100 tackles, including 17 tackles for loss. So, when the Wildcats announced a new odd man front for the defense this season, one wondered how the senior would fare.

Through nine games, Frazier has recorded 122 tackles, including 88 unassisted, with 14 tackles for loss.

Apparently, for players like Frazier, it’s not about the scheme.

“People get too wrapped up in scheme,” said El Dorado coach Steven Jones. “If you have a player like Quentin Frazier, you play a 4-3, 3-4, 3-3, any kind of scheme you want, it doesn’t matter. You have a player that is going to make plays regardless of what situation we put him in. We knew he would shine at that spot and he’s really showed out this season.”

At 6-feet and 210 pounds, Frazier isn’t the prototypical defensive end. But he’s played much bigger than his measurables. And, his intangibles are off the charts.

“Just watch the tape. The first thing I think of when I talk about Quentin is his motor. I mean the dude, every single time the ball is snapped, he is giving the most effort I’ve ever seen a football player give. To string that together the entire game is impressive. His effort speaks for itself,” said Jones.

“You watch the guy play on Friday, I tell people all the time, a lot of his tackles are running guys down from the other side. They know where number 48 is at so they’re not going to run the football to him. He may make a tackle on the other side of the field on the sideline. He might hawk down a running back 20 yards downfield just because he’s never given up on a play. And if you watch our kickoff unit, he makes almost every single tackle on the kickoff. He’s like a missile flying down the field. He goes and finds the ball carrier. He has a knack for tackling.”

That knack could be an asset at the collegiate level. Though undersized, Jones said Frazier could play football beyond high school.

“I think he can. He could play some defensive line, but he has the speed to probably play linebacker,” said Jones, who said the combination of rare athletic ability and a non-stop motor are what makes Frazier unblockable.

“Athleticism has a lot to do with it. He plays well with his hands. He’s a fighter. The main thing though is the effort. If you take a single down off as an offensive lineman, he’s going to destroy you.”

El Dorado’s defense struggled at times early in the season, especially against the run. Frazier’s effort and production have been consistent each week, however. The nine tackles he recorded Friday in Russellville was one of his more modest outputs.

As the Wildcats approach the playoffs, it won’t be about statistics but victories. El Dorado will rely on the defense, which means even more will be expected from Frazier.

“He’s the anchor of the defense. It would be tough without him,” said Jones. “I just like to watch him compete. The defensive coaches get excited after every game just to see how many tackles he has. Statistically, he’s put together a great season. It all boils down to how hard that guy plays. I’m proud of him.”