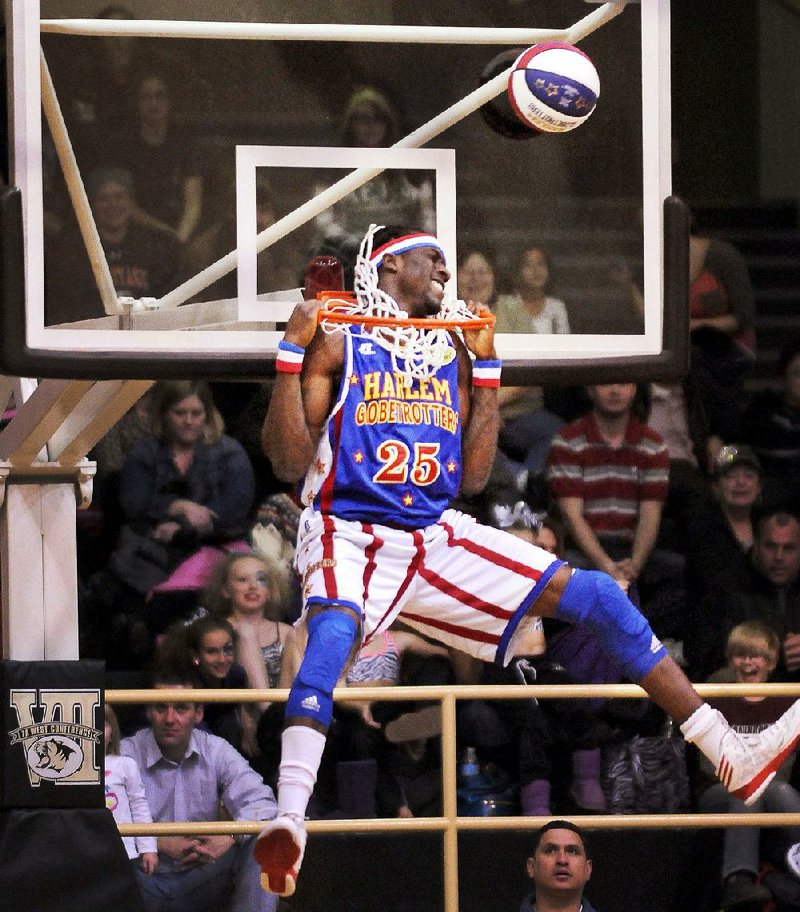 The world-famed Harlem Globetrotters will return to El Dorado in February with their 2020 world tour “Pushing the Limits,” and tickets go on sale to the public at 10 a.m. today.

For more than 90 years, the Globetrotters have provided fans with a unique experience that blends comedy with crowd interaction, awe-inspiring athleticism and basketball skills, including dazzling displays of ball handling, high-flying dunks and tricks.

The Globetrotters last stopped in El Dorado during their 2017 world tour, an event that was also courtesy of Main Street, and performed for a sold-out crowd.

“It was profitable for Main Street. We sold every ticket we had, and we had a few folks that we sold standing-room only space to,” Paul Choate, former president of the MSE board of directors and now a member of the El Dorado City Council, said at the time.

Beth Brumley, executive director of MSE, said the group is hoping for a similar turnout for the Globetrotters in February.

“We are so excited to bring the iconic Harlem Globetrotters back to El Dorado. After their tour stop here (in 2017), we knew if the chance ever came available again, we had to have them back,” Brumley said.

Many of the Globetrotters stars who visited El Dorado in 2017 will be returning, including Big Easy Lofton, Hi-Lite Bruton, TNT Lister, Swish Sutton and Torch George.

And as with the 2017 show, legendary Globetrotters with El Dorado roots will be honored.

Tatum is considered the original clown prince of the Globetrotters and is credited with infusing the comedic and entertainment element into the team’s exhibitions.

El Dorado-native Lou Brock, former professional baseball player and member of the National Baseball Hall of Fame, played a few games with the Globetrotters after winning a World Series title in 1967 with the St. Louis Cardinals.

Brock, 80, played with the Chicago Cubs, joining the team in 1961 before being traded to the Cardinals in 1964.

He was known for his speed and base-running prowess and he accumulated 3,023 during his professional baseball career.

“We … will celebrate the history of El Dorado’s connection with the Globetrotters, having native hall of famers and former Globetrotters from our own town, Goose Tatum and Lou Brock,” Brumley said, adding, “If you have never experienced the Harlem Globetrotters’ live show, this is a family experience like no other and with their all-new show, I know this will be something special for us all.”

Brumley said Delek is one of several sponsors for the show.

Tickets are reserved seating and are available online at www.mainstreeteldorado.org or by calling the Main Street office at 870-862-4747.

A limited number of Magic Pass tickets will be available for $20. The Magic Pass is a pre-game, interactive event that will take place on the court between players and patrons 30 minutes prior to doors opening for the general public.

Fans who participated in the Magic Pass must have a game ticket and a Magic Pass ticket.

Following the game, Globetrotters stars will sign autographs and take photos with fans.