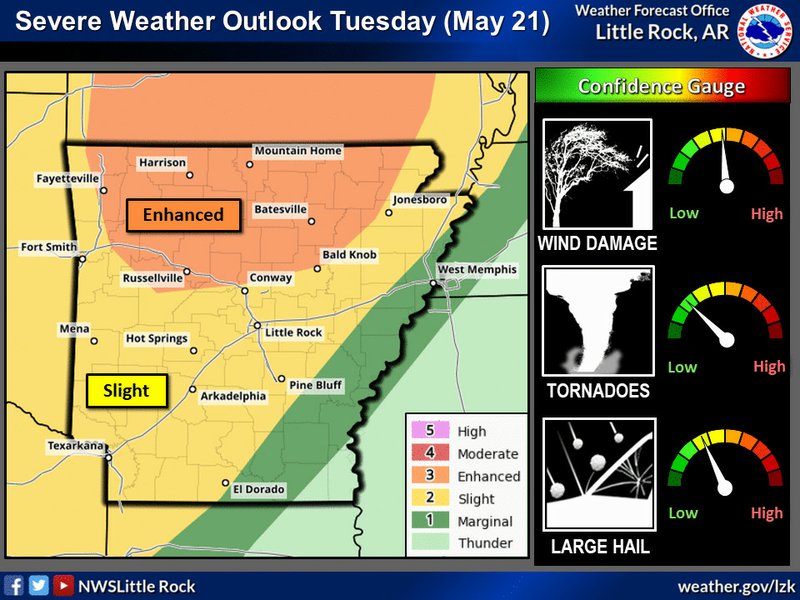 More severe weather is possible this afternoon in Union County as strong thunderstorms and damaging winds are expected to move into the region.

Jason Hansford, senior meteorologist with the National Weather Service office in Shreveport, Louisiana, said they are monitoring a storm system in the lower Texas panhandle and across western Oklahoma that is expected to move northeast during the day before spreading to south Arkansas in the afternoon.

“Areas around portions of Union County could see these thunderstorms there (this) afternoon,” Hansford said.

Union County is on the edge of the region marked as being at a slight risk for severe thunderstorms, he said, which are expected to arrive in mid to late afternoon and possibly into the evening.

“Damaging winds are probably going to be the primary threat, along with some locally heavy rainfall,” Hansford said. “Can’t rule out an isolated tornado.”

He said the severe weather should move out of the region by late evening, though some storms may persist throughout the night and into Wednesday morning.

Union County has seen several storms in the past few weeks and Hansford said that residents should keep in mind that this is the peak of the severe weather season, which typically ramps up in March, April and May. But, he said, after this storm moving through today, area residents can expect to see things quiet down by late this week and through the weekend. Hot and humid conditions can be expected, he said, noting that Union County is likely to see its first 90 degree temperatures of 2019 by the end of the weekend.

Hansford encouraged residents to monitor forecasts and local media for any updates, and to have a plan of action in place in case of severe weather.

“You don’t want to be outside in the weather, you want to be in a good, sturdy building, preferably a brick building away from doors and windows, and just kind of wait the storm out until it does pass,” Hansford said.