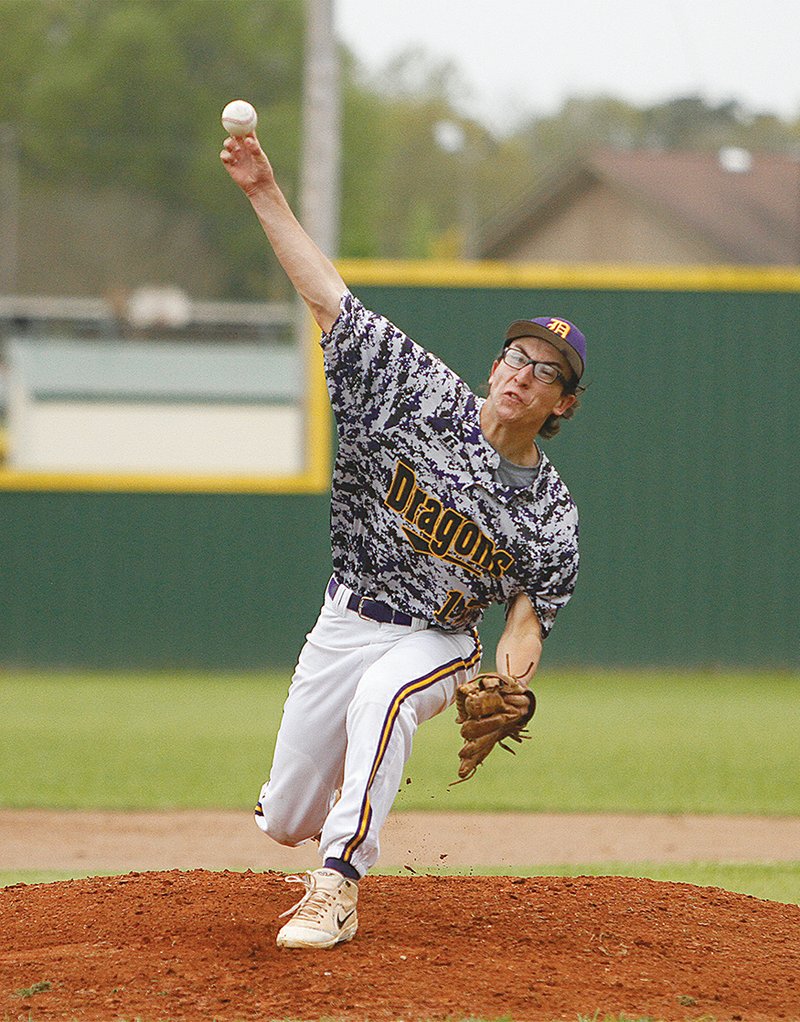 Terrance Armstard/News-Times Junction City's Ty Disotell throws a pitch during the Dragons' contest against Murfreesboro earlier this season at Junction City. Along with Keelan Hodge and T.J. Bale, Disotell is part of a rotation that has been stellar in the postseason, limiting opponents to just eight runs in eight games. Junction City will take on Woodlawn for the 2A state title Friday morning at 10 a.m. at Baum-Walker Stadium in Fayetteville.

It’s been said many times that pitching and defense wins championships on the baseball diamond.

Heading into the season, Junction City had enviable pitching depth with Keelan Hodge, T.J. Bale and Ty Disotell serving as their potential top three starters, but what the Dragons’ trio has done in the postseason has been nothing short of dominant.

Now the Dragons are hoping to get one more scintillating performance in the 2A state finals against Woodlawn to complete their run.

“Our pitching staff has been pretty solid all year,” said Junction City coach Joe Paul Hammett. “Keelan had really been our No. 1, then T.J. was our two and Ty was three. Defensively, we’ve been pretty strong behind all three of them. We try to make the routine plays, and we’ve been pretty good at that.”

Hodge emerged as the staff ace two years ago as a freshman, and he has enjoyed an outstanding junior season.

During the regular season, Hodge did not allow a run over 26 2/3 innings against 8-2A competition. After throwing four scoreless innings in the Dragons’ win over Foreman to start the regional tournament, the junior started the regional final against Parkers Chapel on short rest, but allowed three runs while recording just one out.

But Hodge bounced back with a superb performance in the opening round of the state tournament by firing a one-hit shutout with 13 strikeouts in Junction City’s 9-0 win over Carlisle.

As part of his streak during the regular season, Hodge shut out Woodlawn 7-0 in a game that called after five innings due to rain. Hodge struck out 10 and walked two while allowing just two hits.

“Keelan has gotten stronger this year arm-strength wise,” Hammett said. “When he’s on and his arm is feeling good and everything is going his way, he’s bumping 84-85 with his fastball. At our level, that’s a pretty good fastball, and then he’ll throw his curveball and his changeup. The thing that he’s been better with at this year than over the last two years is his control. He’s been a lot better down the stretch here throwing strikes.”

A senior, Bale has done his best work in the postseason.

Bale has won all three of his starts in the postseason, making four appearances overall.

In 19 innings, Bale has allowed just five hits and two runs along with 10 walks and 22 strikeouts.

He was at his best against Woodlawn in the regional semifinals two weeks ago, firing a two-hit shutout in a dramatic 1-0 win over the Bears that wasn’t decided until Jack Smith won the game in the bottom of the seventh with a walk-off single.

“Being new to the program, it was an adjustment period for me and him both a little bit,” Hammett said. “He started the season in pretty good shape. He threw a good game early in the year against Genoa Central, but then he had some arm problems and was sick. It took awhile to get him back to where he is now, and once he did, that definitely was one of his best games (against Woodlawn) and we needed it.

“He’s fit in well with the guys, and he’s doing what I thought he could do to help us pitching-wise and defensively at shortstop and third. T.J.’s fastball has always had pretty good pop. His best pitch is probably his curveball.

“He throws it for a strike and has great control of it, so we’re not scared to throw it in any count, and that was big against Woodlawn, especially their top hitters. He’s definitely come on down the stretch like you want your seniors to, and hopefully we can continue to do that one more time.”

Work can be sporadic at times for pitchers deeper in the rotation due to how the schedule plays out, but Disotell has shined when the lights have been their brightest in the postseason.

In the regional final against Parkers Chapel, Disotell came out of the bullpen to toss four scoreless innings, holding the Trojans to just one hit while striking out four, as the Dragons overcame an early 3-0 deficit to win 9-3.

A junior, Disotell made his first start of the postseason a memorable one by taking a shutout into the seventh en route to a four-hitter with eight strikeouts to lead the Dragons to a 3-1 win over Horatio in the state semifinals to send Junction City into its showdown with Woodlawn for the state title on Friday.

“Ty really pitches to contact, so our fielders defensively know there are probably going to be a few more balls hit that they are going to have to field,” Hammett said. “That’s a good thing sometimes. Going into Saturday, we felt pretty confident with Ty throwing strikes. We thought they would hit him some, but they never did got on him very well. Three of those four hits were infield singles. Ty is at his best when he is throwing his curveball for a strike, and he really pitches off of it.

“He threw it for a strike, and when he was ahead in the count, he could throw it in the dirt. Truthfully, we didn’t expect the score to be 3-1. We felt we would have to score a few more runs because we thought Horatio would score a few more, but after we got those three in the third, we kept going along and by the fifth, I decided that three runs was going to have to be good enough, and Ty was up to the task. He came up big when we needed him.”

But the Dragons aren’t limited to just Hodge, Bale and Disotell.

Bryce Ware, Gabe Richard and Tanner McLelland have stepped in at times to throw key innings with McLelland throwing 2 2/3 scoreless innings behind Disotell in the regional final win over Parkers Chapel.

For Hammett, having a staff with this kind of depth is something that he isn’t accustomed to having.

“Usually in 2A, normally at the most, we’ve got two guys that we feel pretty comfortable about, but that third one, you had to piece it together,” Hammett said. “This is the first time that I can remember, it’s been over 10 years at least, that we had three guys that we were pretty confident in that we could start our No. 1 that first day and two the second and three on the third.