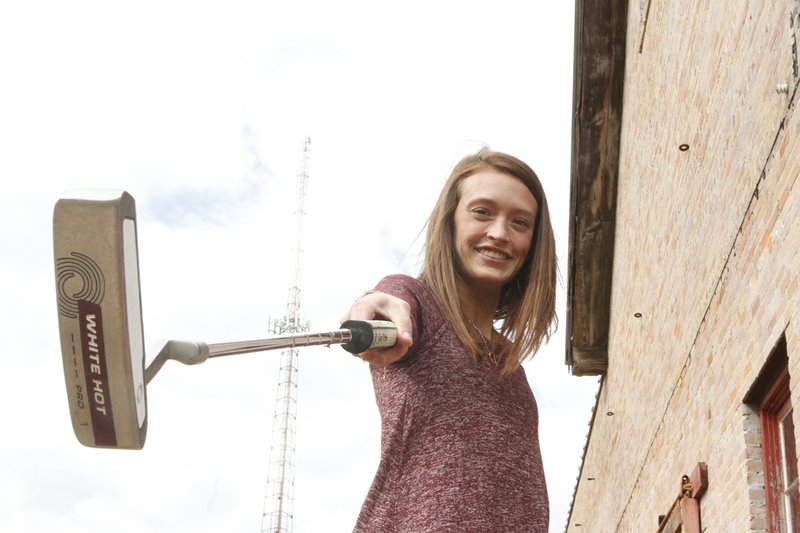 Smackover's Jordan Price, who played golf and tennis, is a finalist for News-Times Scholar-Athlete of the Year. She has a 4.179 grade point average. - Photo by Terrance Armstard

As Student Council president and class salutatorian, Smackover’s Jordan Price enjoyed a senior year of high achievement. But, her most vivid memory was, perhaps, her biggest failure.

Price sported a 4.179 grade point average, placing her second in a class of 89. She earned that GPA while competing simultaneously in golf and tennis during the spring semester. She won the district championship in tennis, teaming with doubles partner Mary-Claire Wilcox.

“Jordan Price has accomplished something not a lot of athletes do in that she has played successfully enough to compete in the state tournament in both sports the last two years,” said Smackover golf coach Mike Poff. “Jordan is a dedicated athlete who pushes herself to be the best she can be. She is the type of athlete who knows if she wants good results, she has to put in the work.”

Price and Wilcox advanced to the second round of the 3A State Tennis Tournament. In golf, Price narrowly missed earning All-State honors by a single stroke.

Want to get her riled up? Ask her about her final golf match, where she scored a maximum 10 on two different holes and saw her score balloon to a 102.

“It was on two par-3s,” she began. “I hit it out of bounds. I’m very competitive within myself so I kind of got mad at myself. I think that’s where I fell off the wagon on those two holes. The first time, I think I bounced back O.K. I think I may have bogeyed the next hole. The second time I scored a 10, I was really frustrated. I think I double-bogeyed or triple-bogeyed on the next hole.”

That was several months ago. Surely, she’s over it by now?

“I will probably always think about that.”

Actually, Price, who made All-State as a junior after carding an 86, said she put the blunder behind her after a few minutes. Her future is her focus. She said she plans to attend Henderson State University and study biology and then, perhaps, go to physician’s assistant school, which is a two-year program.

Biology is sort of a tradition in her family.

“My mom’s a nurse and my dad majored in biology in college and my aunt is the biology teacher in our school. I’ve always been interested in science,” said Price. “I just enjoy learning about how everything works together, how everything in your body works perfectly together.”

The thought of becoming a physician’s assistant and working with athletes intrigued Price, although it wasn’t her first choice.

She took her president’s tasks seriously and relished the leadership role.

“I’m more comfortable as a leader but I realize as a leader you have to know how to follow in times you need to follow,” said Price, who credited cousins Logan and Landon Bradley, former News-Times Scholar-Athlete nominees, for motivation.

“They were nominated for Scholar-Athlete, too. I’m the only girl on that side of the family so I wanted to prove myself and show them I’m just as good as they are.”

Just as competitive in the books as she is on the course, Price looked back on her athletic career with pride. Along with Wilcox, they earned back-to-back district doubles titles.

“I’m happy with the way it turned out,” she said. “I kind of thought about quitting tennis my senior year but I play doubles. My doubles partner was a senior as well, so I didn’t want to let her down. So, I went ahead and played tennis.”

As for that final state golf tournament in Fairfield Bay?

“We all rode back with the coach, just to have one last ride back together. At first, we were all crying because we all didn’t do as well as we could’ve. So, we were all crying at first but then we started jamming to some music. We got Coach Poff singing along with us and we had a fun ride back. We stopped and ate at Olive Garden, so it was a fun ride back,” Price said with a smile.

“We had all cried by ourselves whenever we finished. When we got together, we had one last cry and then we were good. It only took us about 10 minutes.”

The best lessons often come from the biggest disappointments. The two worst holes of her golf career were, at least a learning experience.

“I definitely learned that when something doesn’t go your way in life, you have to put it behind you and not think about it, start out with a blank slate after that happens,” Price said. “After that 10, it was in my head. I was like, ‘I scored a 10 on that hole, I need to make up some strokes.’ Then I tried to knock the crap out of my drive the next time. I learned you’re not going to be able to win strokes back. You just have to try to not lose strokes in the future.

“If something doesn’t go your way, just forget about it and keep going. In golf they say the most important shot is the next one because you can’t do anything about what happened last. I think that’s important to apply to keep your eyes on what’s in front of you.”