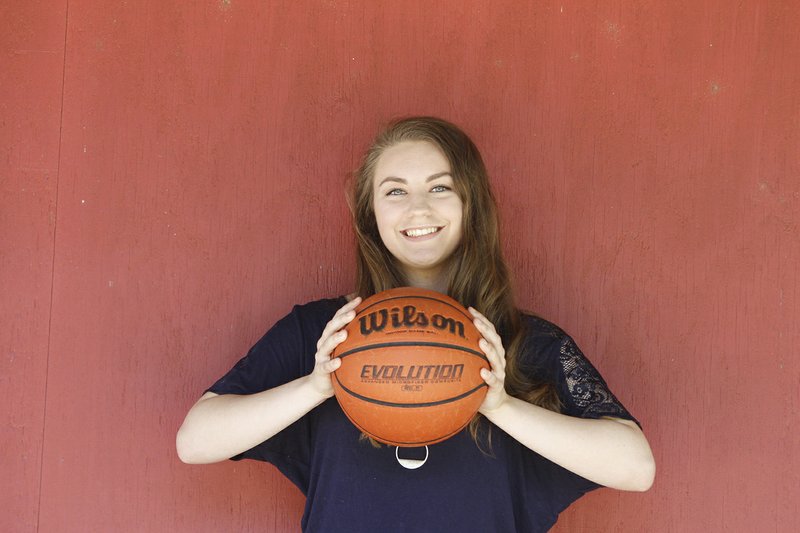 Hannah Miller, a senior basketball player at West Side Christian, is a finalist for News-Times Scholar-Athlete of the Year. She has a 4.03 grade point average. - Photo by Terrance Armstard

While sitting for an interview, West Side Christian’s Hannah Miller paused thoughtfully after each question. She parsed her words carefully, almost uncomfortably so, at times.

A 4.03 student and president of both her school’s National Honor Society and Student Council, Miller’s struggles weren’t with the questions. She was uneasy talking about herself.

To her, however, her lengthy list of volunteer work, from her church to community clean-up to UCAPS, might be more meaningful.

“I care a lot about our school and about the other kids there,” she said. “I really like service hours. I like going in and doing community stuff. I really like helping people.”

Miller’s college future is still a bit in the air. She’s narrowed her college choices to University of Arkansas and Ouachita Baptist University. She’d like to study Communication Disorders and become a speech pathologist.

Miller averaged 8 points and 8 rebounds per game while playing for her father and coach, Randall Miller, at West Side. A role player, whatever the team needed, she provided, whether it was passing, defense, scoring or bringing the ball up the floor.

“I think this year our team had to rely on me a lot more than previous years,” she said. “It was an adjustment because I liked being, kind of, in the background, being the one who gets shots for Lauren (Land) or shots for Sofia (Narciso). But it was kind of nice this year being able to do a little bit more.”

“I take things very seriously, sometimes, maybe too much so,” she said. “In basketball, I just really want to do well for them. I don’t want to be the reason we don’t do well. So, yeah, there was a lot more pressure this year, but I think, overall, I handled it O.K.”

Miller’s basketball career was a struggle early, especially after an elbow injury wrecked her sophomore season. After tearing the ulterior cruciate ligament in her elbow, she had to totally revamp her playing style.

“I had worked really hard over the summer shooting threes. I’d gotten pretty good at it during the summer and right after, I had tore it,” she said of the UCL injury. “So, I had to sit out most of that year, and it was really frustrating. But my junior year I had it in my head that I was going to be the 3-point shooter, like that would be my thing. And, it just never really came back around the way it was. So, my dad had to shift me into more of a driver, which was something I had to adjust to. Toward the end of my junior year and then my senior year, I got to see myself really improve at that. That was really cool.”

For Miller, being the star of the team, having the spotlight, was never a goal. It’s the same off the court, where she spends countless hours volunteering in all sorts of organizations. Her favorite, she said, was Operation Christmas Child.

“Volunteering is something I’m interested in because I enjoy it. I love being able to do something for someone who needs help, without that person feeling obligated to pay me back for that help,” she explained. “I like helping others because it matters and it makes a difference in other people’s lives.

A life-long student at West Side Christian, Miller said she preferred the small, private school even when her father worked for a time at El Dorado High School. As for having her dad as a coach, that had its ups and downs.

“That has been difficult for me sometimes because we have a close relationship. I can joke with him,” she said. “But, sometimes in practice I’ll joke and it’s not the right time. That’s kind of hard to separate sometimes.”

An only child, Miller admitted she never lacked for attention at home. That could be why she never sought it at school. The daughter of two teachers, earning high marks academically was a given in her household. Being an athlete wasn’t.

“I’m not as athletically gifted as a lot of kids. I feel like I’ve had to work a little bit harder than them to get to where I did this year. School-work, that’s always kind of been my thing. I really enjoy it. It’s kind of nerdy but …”

With each answer, Miller seemed to monitor how much she wanted to talk about herself. She’d rather emphasize her involvement in National Honor Society or Operation Christmas Child. Perhaps “selfless” would be the word that best described her.

“I am not a completely selfless person, even though I strive to be,” she said. “Selflessness, to me, means putting others’ needs before my own. The compassion I have for helping others that motivates me to volunteer comes from God, and not from me.

“I believe that is my drive for everything – schoolwork, basketball, student council, National Honor Society – everything I’m involved in – I want to make sure I honor Him in everything I do, make sure it’s the best I can do and point other people to Him through that.”