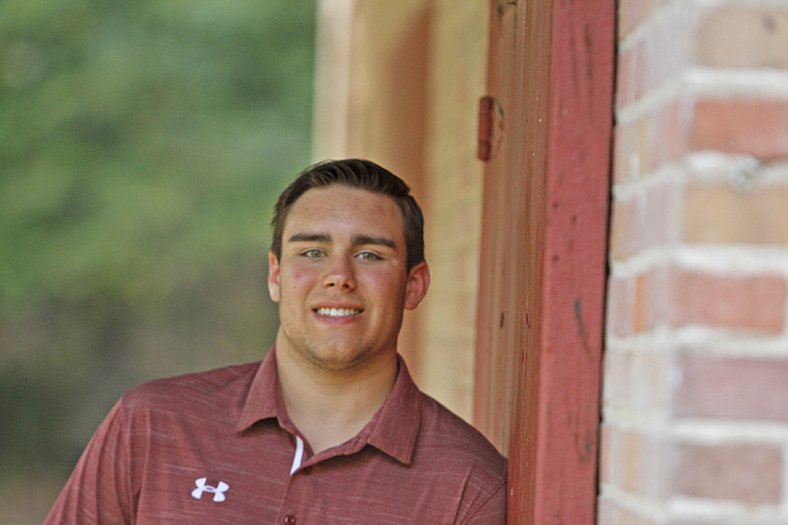 Terrance Armstard/News-Times Parkers Chapel's Shawn Barnes is a finalist for News-Times Scholar-Athlete of the Year. A multi-sport standout, Barnes has a 4.2 grade-point average.

If one is in need of a helping hand, look no further than Shawn Barnes for assistance.

Lauded for always willing to help out whenever needed, Barnes could graduate as Parkers Chapel’s valedictorian.

“If a coach tells me to do something, I’ll go do it,” Barnes said. “I’m really accessible. If someone needs help in the classroom, even if I’m a few years out of practice, I’m more than willing to go back through the book, read through the chapter real quick and help them out and understand it. It just comes naturally. I just want to help people.”

Helping out extends beyond school for Barnes, who has done work with a church youth group, packed meals for families for Thanksgiving and been a bell ringer for the Salvation Army, to name a few.

At school, Barnes is a member of the FBLA, student council, beta club and is the class secretary.

“I like to go to these conferences and compete just to see how far I can get in those competitions,” Barnes said. “My other clubs are more decision-based and helping out. Just having to make those decisions and putting them to work.”

Barnes and Michael Brotherton both sport 4.2 grade-point averages, and the two became friends after Barnes started attending Parkers Chapel in the third grade.

“I knew very few people,” Barnes said. “Around fourth grade, I started getting around, and Michael was just a guy I liked to hang out with. From there, we became friends and we stayed friends throughout high school.”

Brotherton added, “It’s the most friendly valedictorian competition you could probably ever imagine.”

Regardless of the final outcome, Barnes said he is thrilled to be competing for such an honor.

“It’s a huge honor to be at the top of the class and be representative of my class academically,” Barnes said.

When asked who has had the biggest influence on him for succeeding in the classroom, Barnes said it was his parents.

“They would stay up with me at night, they would study with me every night if I needed to, buy ACT books to study for that or APR, which is coming up,” Barnes said.

Barnes is slated to attend Arkansas where he wants to major in biology and chemistry.

Barnes’ love of biology started at an early age.

“My grandfather used to have these encyclopedias,” Barnes said. “I went through the books and I just wanted to keep learning more about biology and getting more into that field.”

But it wasn’t until he took an AP course in chemistry that got him interested in studying the subject further.

“I was really hesitant to take it, but I was encouraged by my peers to take it,” Barnes said. “I really enjoyed it, and that love grew from that class.”

When he graduates, Barnes said he would like to develop and research pharmaceuticals.

“I’m hoping to get my doctorate in pharmacology,” Barnes said. “I want to be able to help people through new medicines I create. I’ve always been interested in science, and I really like research. My grandmother bought me a microscope when I was younger, and I did my own research and discovered things. I’ve always enjoyed that. Being a part of a research team and accomplishing something like that in class was always fun for me.”

A four-year starter on the gridiron for the Trojans, Barnes has played a key role in Parkers Chapel extending their streak of qualifying for the playoffs to six straight years.

But it’s on the golf course where Barnes likes to relax.

“Golf can be a frustrating game, especially if you’re having one of those bad days,” Barnes said. “You just have to accept the good that you do. You’ve got to accept that. It’s just relaxing.”

Barnes got acclimated to the sport thanks to his grandfather, and when the golf team was in need of players, he quickly joined.

“At a young age, I went and played golf with my grandfather every once in a while,” Barnes said. “I didn’t really pursue golf any further. Then they were needing players for the team, and I was like, ‘Sure, why not. Lets pick the club back up again.’ I just started playing for two years.”

The sport is one that is a favorite in the family.

“Me and my entire family like to get out and play,” Barnes said. “My uncle, whenever he is in town, we’ll go play.”

Barnes also throws the shot put on the Trojans’ track team, and if there is one regret he has, it’s that he didn’t start earlier.

“I’ve definitely gotten better than from last year,” Barnes said. “I wish I would’ve started track earlier in my high school career because I enjoy it a ton. I was kind of iffy on it last year, but this year, I’ve really enjoyed it. I’ve gotten a little bit better. I’m not the best thrower in the world, but it’s fun, and I get to hang out with my friend (Braden Bohannan), who also throws.”

As his career at Parkers Chapel ends, Barnes said he will miss the school, but is ready for the next challenge.

“I’m kind of sad that I’m leaving all of this behind, but I know I have left some traditions for the juniors to pick up,” Barnes said. “School-wise, it’s a huge weight off my shoulders because you’re in that home stretch, and it’s the final go round. Then you go to college, and I’m ready for a new challenge.”