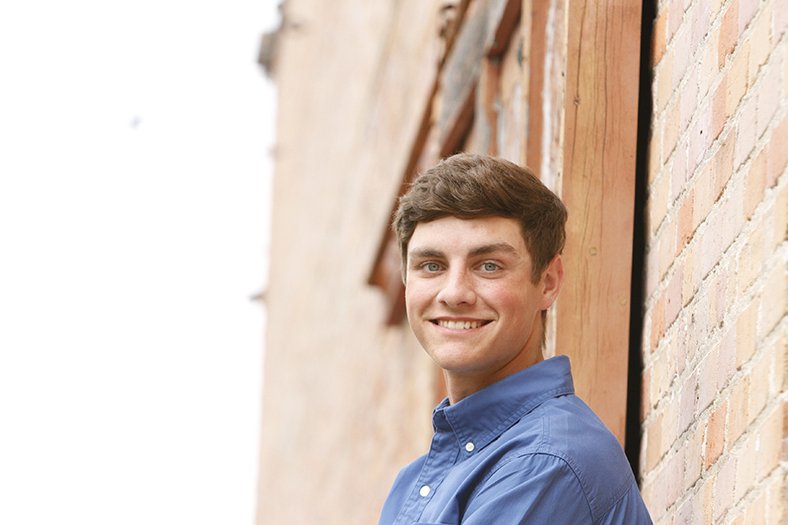 Terrance Armstard/News-Times Parkers Chapel's Michael Brotherton is a finalist for News-Times Scholar-Athlete of the Year. The multi-sport standout has a 4.2 grade-point average.

Sitting on the sidelines is something that Michael Brotherton simply cannot abide by.

During his career at Parkers Chapel, Brotherton has played nearly every sport and participated in a plethora of clubs while maintaining a 4.2 grade-point average.

“There’s a lot of late nights,” Brotherton said. “A lot of midnight dinners. It’s not easy, but I always try to find a way to get it done. Time-wise, it’s rough, but I always find some way to do it.”

That hard work has paid off handsomely for Brotherton, who could be the class valedictorian.

“It’s something that my parents have always really tried to push on me is to do my best in everything, and to finally see everything pay off, it means a lot,” Brotherton said.

Brotherton said he plans on attending Henderson State where he aims to be a pre-med biology major.

“I plan after college to try to go to med school, and become a doctor one day,” Brotherton said. “I’ve thought about orthopedics or anesthesiology. Once I get there, I know I will figure out what I like the best. I’m just not 100 percent sure yet.”

Although his father is a dentist, Brotherton said that while that had some influence on his potential career choice, it was something he wanted to pursue himself.

During his career at Parkers Chapel, Brotherton has played tennis, golf, football and baseball while also running on the cross country team and being a member of the track team.

While it’s certainly common for student-athletes to play multiple sports, Brotherton wanted the experience of participating in each of them.

“Absolutely,” Brotherton said. “I’ve always tried it. I’ve never quit any of them. I stick it out as far as I could go. I’ve enjoyed every one of them. Just here at the school, it’s just amazing. I love every bit of it.”

It would be easy for one to shy away from joining clubs or doing other school activities given the number of sports he plays, but just like the sports he has played, Brotherton wanted to see everything for himself.

“Just to try everything,” Brotherton said. “Just do everything and get a feel for it. I found out I loved all of it and just couldn’t quit any of it. That was the big thing.”

When asked if he had a favorite, Brotherton said enjoyed all of them thanks to the family atmosphere.

“I can’t really narrow it down to any of them,” Brotherton said. “Just being a part of it, especially at Parkers Chapel, it’s a big family for everyone. That’s the big thing that I get out of all of them.”

When his time at Parkers Chapel ends, Brotherton will certainly have left his mark not just in the classroom, but in athletics.

In tennis, Brotherton was a member of Parkers Chapel’s state champion team back in 2016, and he is a three-time All-State selection.

Brotherton also played a key role in the Trojans winning the 2A state title in baseball a year ago.

But if there is one sport that Brotherton has embraced, it’s golf.

He played the sport for the first time last year and was hooked instantly.

“I picked it up in my junior year,” Brotherton said. “It was the first time I ever even picked up a club. It was the last sport in high school that I hadn’t played, so I thought I was going to try it. I ended up loving it. It’s probably one of my favorite sports.”

In just his second year of playing the game, Brotherton earned All-State honors by shooting an 86 at the state tournament.

“It’s the one game I can just go out on a Saturday with free time and just go play,” Brotherton said. “You can be by yourself. You don’t have to have a team playing with you.”

Former Parkers Chapel standout Kade Cushing was a teammate of Brotherton’s in tennis, and he was an inspiration for the senior to try and play as many sports as he could.

“Absolutely,” Brotherton said. “I looked up to him when I played tennis with him. He and I were good friends and still are. He’s a great inspiration for where I am now.”

With college on the horizon, Brotherton got a feel for what to expect by taking an online AP class.

“It’s online. I don’t have a teacher,” Brotherton said. “There’s teachers at the school that I can go and talk to, but I don’t actually have a teacher. It just has the whole syllabus listed out. You just do it on your own time. If you procrastinate, it kicks you in the butt. If you don’t, then kudos for you.”

The senior said he enjoyed taking the class.

As the final days of his time at Parkers Chapel draw near, Brotherton said it will be a relief when everything wraps up.

“I try to see the positive side to everything, but it is stressful,” Brotherton said. “But at the end, I know I will do my best and I will get it done. Right now, these last couple of weeks of high school, it’s rough. I’m feeling the senioritis and everything, but I know it will all get done and everything will turn out good.”