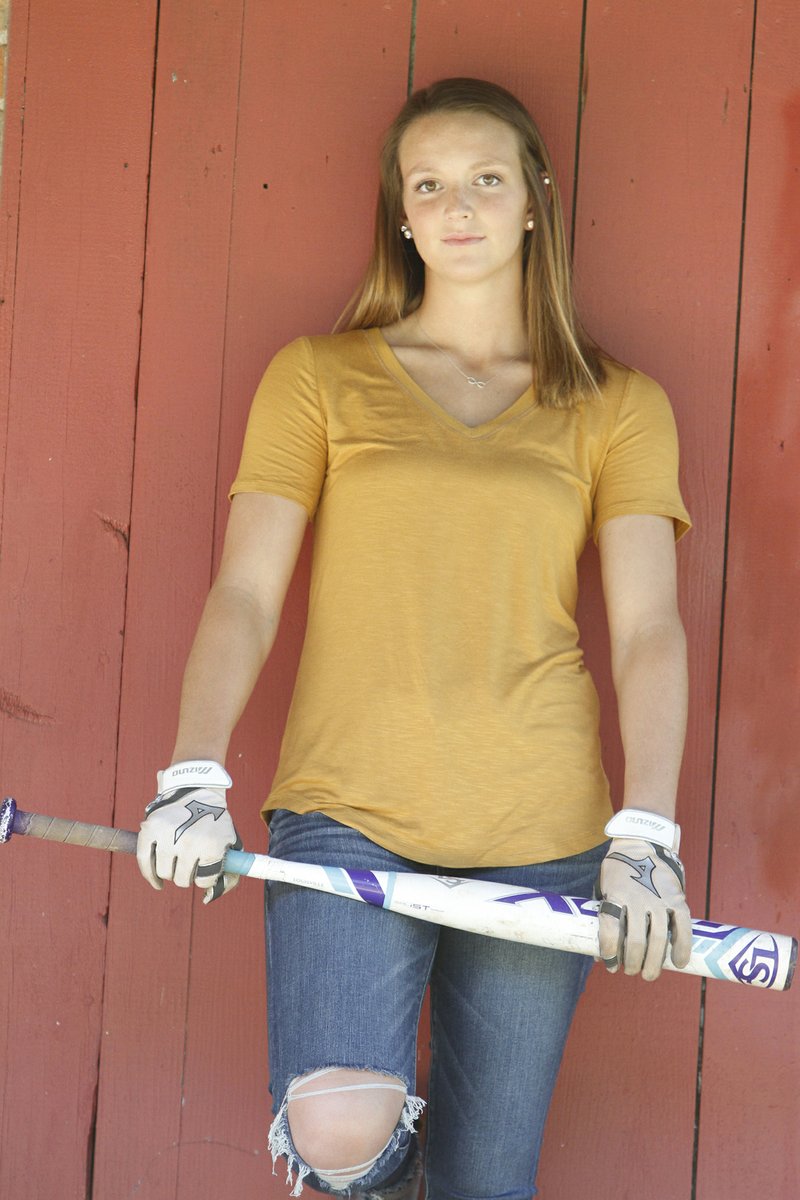 El Dorado's Allyson Silmon, a senior shortstop, is a finalist for News-Times Scholar-Athlete of the Year. She has a 3.92 grade point average. - Photo by Terrance Armstard

“It means you have to be an image that people can follow, look up to and guide. It’s about letting people know they are welcome to approach you and being flexible with others. Understanding people’s feelings and opinions, but not letting them over ride your own beliefs and perceptions. You have to be trusting enough to let other people help, but never let them do the job for you. You have to learn to laugh through the hard times but never treat a situation as a joke. It’s better to look for the upsides in life rather than dwelling on the unchangeable. Most of all you must be confident but not overpowering and diminishing.

“To be a leader you must also still know that everyone must learn and grow. It’s better to grow together and learn from each other than stay the same as you were before. I am strong and I am kind. Although I can be lazy or weak at times, I never lose sight of the upsides of life and always continue to look for growth. I’ve never been one to settle for mediocre or average and although it may not always go according to plan I’ve never thought of ambition as a bad quality. I always look for the best in people and consider their outlooks on ideas. Even though I’m not one for conflict, I’m always willing to compromise. Leadership is a key aspect in a person’s character, and one that I am most proud of.”

Silmon was vice president of her class from her freshman through her junior years before she was elected president as a senior. She never took it lightly.

“It’s pretty big. You’re over prom. You’re over the Senior picnic and Baccalaureate and getting graduation lined up. You’re involved in everything, “she said.

“I like leadership. I like being in a leadership role. I’m pretty well organized. That’s kind of why I got voted in because I can get things done when things need to be done.”

Does that mean she’s bossy?

“A leader is supposed to bring up people, bring people together. It’s a group effort, a community effort. It’s not just me giving orders. That’s why I didn’t say I was running it or in charge. I said I was involved,” Silmon answered. “I mean, we have chairs over everything. We’ve never done this before but this year we decided to do chairs like for prom, there were two chairmen. So, it’s a group effort.

“I can’t be there for everything. I couldn’t even decorate for prom because I had a softball game. But we work so well together, the whole class and stuff, so it got done perfectly.”

She said she’s proudest of National Honor Society because of the grade point average that must be maintained.

“I value athletics and my schoolwork. Definitely when they say student-athlete, I am a student-athlete,” said Silmon. “I keep it balanced. I get my schoolwork done but I’m also going to make sure I’m in the batting cages and I’m prepared for the game. I would have to say they’re kind of balanced.”

Silmon said she will attend Louisiana Tech and major in chemistry and pre-pharmacy.

“I really want to be my own boss. I want to open my own pharmacy one day. I’m hoping if I can shadow and be in enough pharmacies, hopefully I can buy one out or start my own and maybe do something different. I actually really want to make it to where kids can get the medicines they need without their parents being turned down because of the price or something. I don’t know. I just want to make it easier, but I still want to make a profit. Maybe If I could just get in on a pharmacy and change that or influence that in a way.”

Own a pharmacy that doesn’t overcharge for drugs?

A four-year starter in softball, Silmon moved to shortstop as a sophomore. The position is considered by most to be the leader of the infield.

She insisted she never sought out the leadership roles.

“I’ve always been like that. Even around my friends, I’m always the mom, they say. I guess I just like guiding people,” she said with a shrug. “It’s not something I pursue. It just kind of happens. Like, I didn’t go looking to be president. It just happened and I accepted.”

A .480 hitter, Silmon’s four home runs is among the team leaders. A two-time all-conference player, she holds El Dorado’s single-season home run record and has an .803 fielding percentage at shortstop.

“I want to talk more about my family and friends because really without them I wouldn’t be where I am,” Silmon said. “They constantly encourage me to strive for more and give me the confidence and faith to succeed. Without them I wouldn’t be able to overcome the hard times or the bad days in order to make it to the good days and my highlights. All the times my parents helped me practice or study. My sister being the greatest role model she could to influence me in a good way. My friends being there through it all. They are the ones that shaped me to be the ambitious person I am.”