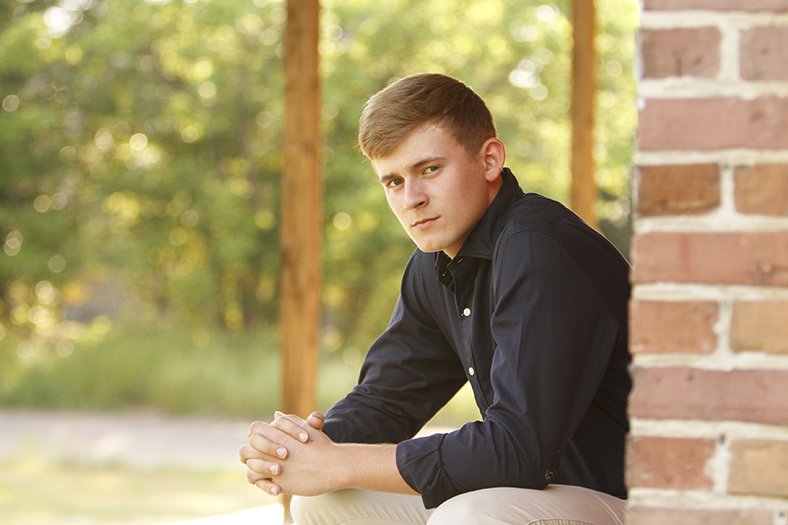 Terrance Armstard/News-Times El Dorado's Derek Jobe is a finalist for News-Times Scholar-Athlete of the Year. A standout in baseball and football, Jobe has a 4.25 grade-point average

Whether it’s been near or far, Derek Jobe has sought to bring change for the betterment of the people he has encountered.

Jobe, whose father is a preacher at the College Avenue Church of Christ, has been on mission trips to places most avoid.

Jobe went on a trip to Little Rock over spring break, and he has also been to Nicaragua while making trips within El Dorado.

“We’ve gone on mission trips to El Dorado, too,” Jobe said. “We go to places that you would never go, but we’ve changed some people’s lives that are right next to ours that we have no idea. In Little Rock, we met some people with some crazy stories. We were there for a week, so we got to get into their lives and make some friends. It was really nice.”

The trip to Nicaragua in particular has stayed with Jobe.

“I’ve been to Nicaragua,” Jobe said. “The people unluckily got put in a position that’s so much worse than yours, and they did nothing to deserve it. It’s really crazy and very eye opening to see them in those situations and not it being their fault. My church had gone a couple of times, and my dad had gone a couple of times. It was probably two summers ago. I went with my dad and my brother. On one day, I made bricks for eight hours, and that was very eye opening to see how people worked without machines. We ended up building a church with that, and that was kind of cool that I ended up helping build a church.”

The impact of those trips has made a lasting impression on Jobe, who added that his family will be going to Nicaragua this summer.

“It definitely changes your perspective on life,” Jobe said. “It puts you in their shoes for a week or two or a couple of days, and you can definitely see how good you have it.”

The El Dorado senior has also excelled in the classroom, sporting a 4.25 grade-point average.

Jobe, who signed to play baseball at Harding back in January, credited his parents and teachers for pushing him in the classroom.

“Definitely my parents and my past teachers,” Jobe said. “I really had some good teachers at Northwest (Elementary) that really made me strive to do the best I can, learn as much as I can and go as far as I can in life.”

Several members of Jobe’s family have attended Harding, and that helped sway his decision.

“I’ve definitely been exposed to Harding a whole lot,” Jobe said. “I’ve been up there a bunch of times. I really like it up there, but when I had the chance to go to some camps up there, and they were interested, it was pretty exciting.”

Jobe added that he wants to major in sports management.

“I like sports, and I know I won’t be able to play someday, but I want to stay in sports,” Jobe said.

Jobe started his career at El Dorado as a three-sport athlete before focusing on football and baseball, and balancing everything has not been easy.

“You definitely have to take care of your work whenever you have the time to do it and not procrastinate and wait until the last second,” Jobe said. “I’ve thought of that sometimes, but I try to get it done.”

Jobe’s senior year on the baseball diamond has been special thanks to getting the chance to play with his younger brother, Austin.

“It’s been pretty cool,” Jobe said. “It’s an experience that not a lot of people get to have. He’s definitely excelled. I knew he was pretty good. He’s not afraid of anybody. He’s about like I was during my freshman year. He’s got nothing to lose, just get out there and go for it.”

The two are also competing to see who will have the lowest earned run average this season, although Jobe joked that he was at a bit of a disadvantage.

“Right now, it’s still me, but he was ahead of me for a couple of games there because he pitched against some lesser teams than I did at the beginning,” Jobe said.

With his career at El Dorado winding down, Jobe was appreciative of the time he had at the school.

“It’s definitely been a great experience,” Jobe said. “I wouldn’t trade it for anything. I got to hang out with a lot of guys that I wouldn’t have ever really got to hang out with. I have some really cool relationships, and I have a lot of great friends out here, too (on the baseball team). These coaches are top notch for sure.”

When asked if there was anything he would take with him to college that he learned in high school, it’s the work ethic instilled by his coaches.

For Jobe, it’s always about giving back, whether it’s a church mission or doing work with the several clubs he’s a part of, that will always stay with him.

“I’ve grown up here,” Jobe said. “I moved here when I was one, so it’s been nice to help out and give back.”