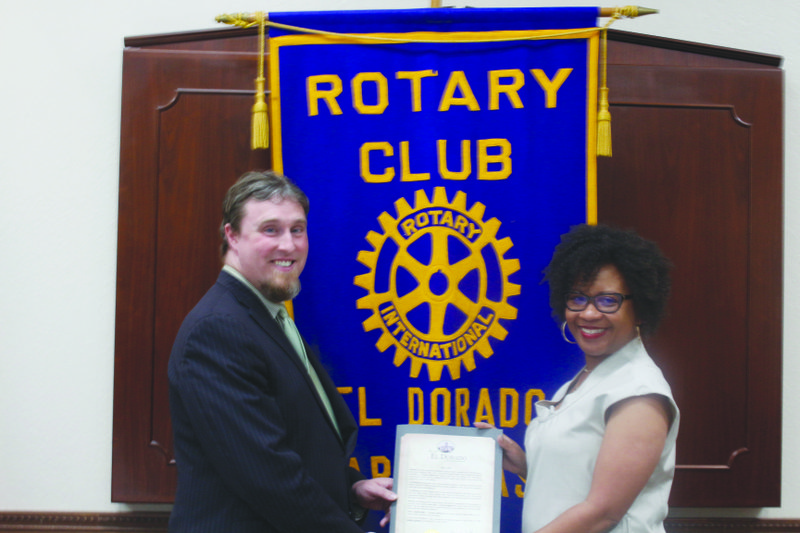 Members of the community and the greater Rotary community in Arkansas turned out to celebrate the centennial anniversary of the El Dorado Rotary Club on Monday.

The El Dorado chapter of Rotary was formed in 1919 with 24 charter members and was the seventh Rotary Club in the state of Arkansas.

Rotary meets twice each month, bringing a different guest speaker to each meeting, where they discuss a variety of topics affecting Union County. Sometimes the topic will center around economic development, while at other times they may discuss a local nonprofit’s mission or new developments in health care.

Rotary also participates in community service, which was part of the organization’s original mission. The local Rotary has provided help to the Boys and Girls Club of El Dorado, HOPE Landing, the Union County Master Gardeners, the Union County Animal Protection Society and Salvation Army, among other organizations.

“Since the club’s establishment 100 years ago, professional and business leaders in south Arkansas have continued the Rotary legacy by providing humanitarian service, encouraging high ethical standard and promoting good will and peace in their community,” he said. “I commend the El Dorado Rotary Club for their impact on the great state through invaluable and selfless service to the citizens of El Dorado.”

Along with the proclamation read by Shepherd, El Dorado Mayor Veronica Smith-Creer named Monday, May 13, El Dorado Rotary Club Day. She also congratulated the members of Rotary for their service to the community and their inclusive nature.

“The El Dorado Rotary Club has exhibited a progressive attitude by admitting it’s first women members in 1989,” she said, “and elected the first female president in 1994 and serves as an example for other organizations and institutions.”