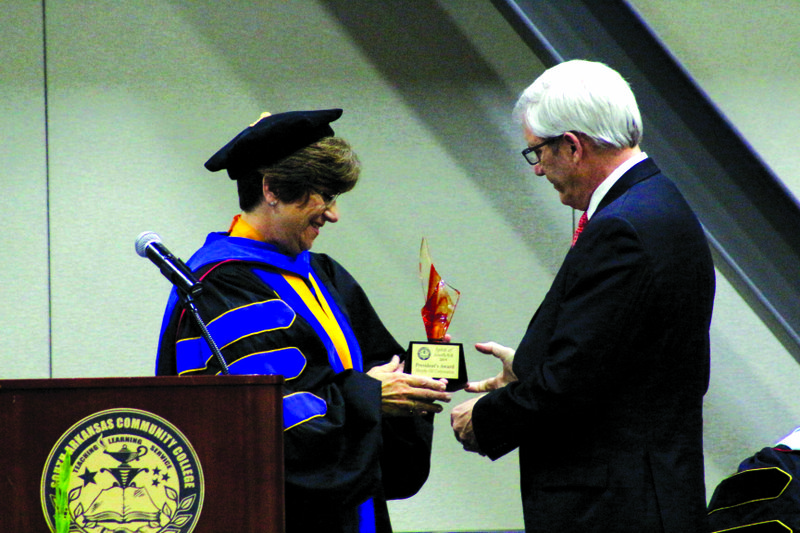 As part of the South Arkansas Community College Commencement on Friday evening, President Barbara Jones announced this year’s recipient of the Spirit of SouthArk award.

The award recognizes individuals or organizations within the community who have a large impact on SouthArk. This year’s recipient was the Murphy Oil Corporation.

Jones said Murphy Oil has been a large contributor for the college through a variety of projects. One such project was the El Dorado Conference Center, which was built in collaboration between the city and the college. Murphy Oil Corp. helped the project through a $5 million gift toward construction. The Conference Center houses the SouthArk student services office as well as serving as a meeting and event space for local organizations.

Another project Jones mentioned is the Stepping Stones program, which is for young adults with intellectual and developmental disabilities and is now known as the Academic and Career Achievement Program. Murphy Oil contributed over $200,000 to start the program which teaches independent living skills and social activities while providing work-related internship opportunities.

Jones said Murphy employees have served on college boards, advisory committees and ad hoc committees for a variety of college initiatives. Murphy Oil also offers a gift matching program as a way to encourage employees to get involved in philanthropy. For charities, the program provides a 1 to 1 match, but for educational institutions such as SouthArk it’s a 2 to 1 match. Through this, the corporation has donated over $300,000 to SouthArk over 20 years.

Jones also said many of the SouthArk students have benefited from the El Dorado Promise, which was made possible because of the Murphy Oil Corp. Of the 2,500 El Dorado High School graduates who have received the Promise, 822 have used their scholarship to attend SouthArk at some point.

Walter Compton, executive vice president and general counsel for Murphy Oil, accepted the award, noting that it was a privilege to accept the award on behalf of the board of directors.