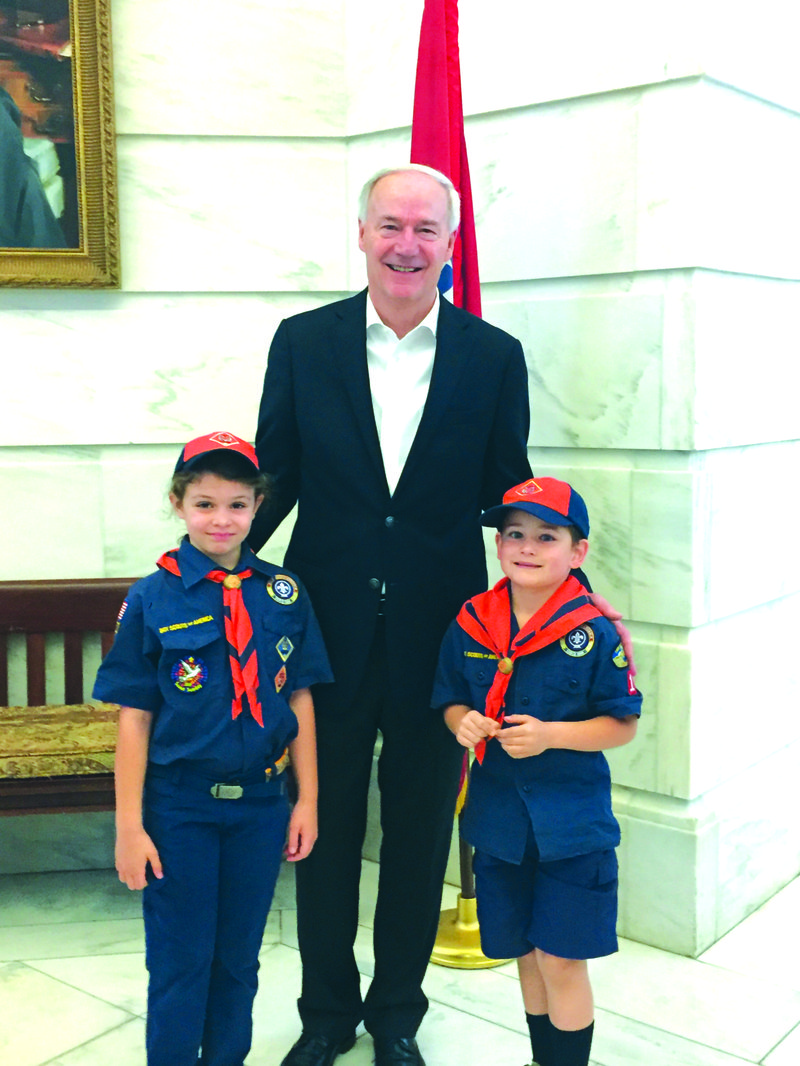 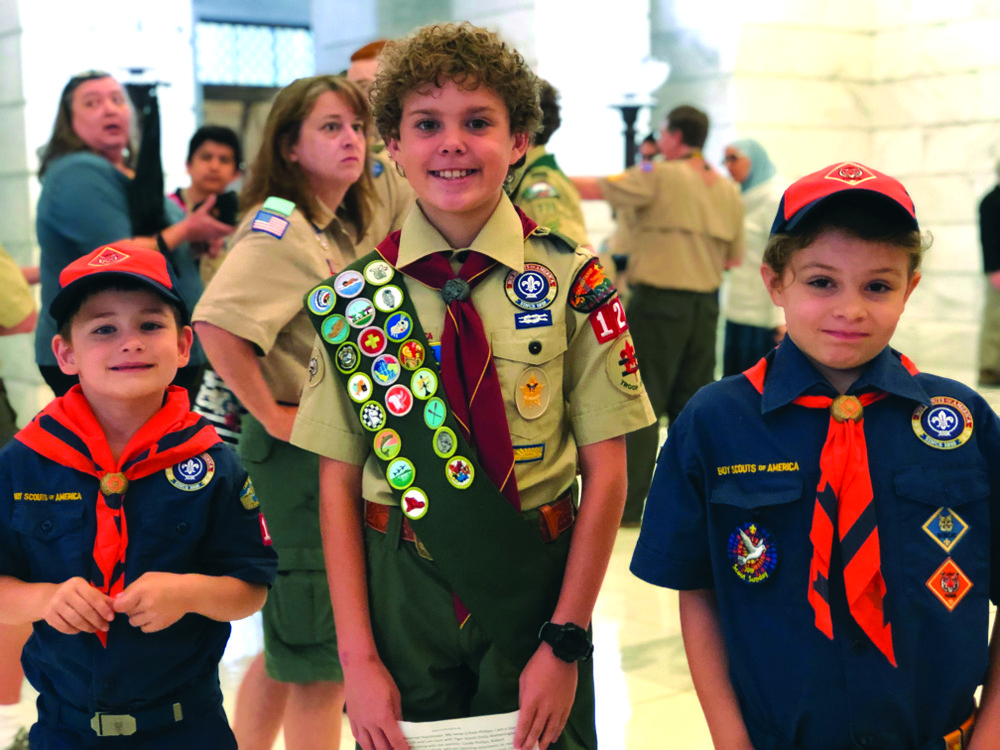 Local Boy and Cub Scouts went to Little Rock this weekend, where they reported on the activities of the De Soto Area Council, which administrates the Boy Scouts of America in 11 counties in south central Arkansas, to Gov. Asa Hutchinson.

“It went well. We did it inside the [Capital] Rotunda due to weather,” said Ted Woodlock, CEO of the De Soto Area Council. “The governor came out, he was introduced, and he had a few nice things to say to all the scouts in attendance.”

Evan Phillips, a star scout of Troop 120 in Smackover, gave the presentation, as Emily Wetherington and Edge Woodlock, of Troop 18 in El Dorado, stood by. Evan told the governor some of the recent accomplishments of the De Soto Area Council troops.

“It’s just to give a report, (including) here’s what happened in scouting over the last year, here’s where we are. A number of scouts served merit badges, service projects,” Woodlock said. “We’ve got Family Scouting now, for girls to be a part of all our programs.”

Additionally, nine local Scouts earned their Eagle Scout rank; area scouts provided over 4,000 service hours; and both the Cub Scouts and BSA were fully integrated with girl troops. Weekend events and summer camps were hosted throughout the year at Camp De Soto and scouts met regularly to learn life skills.

Family Scouting started about two years ago with the Cub Scouts, Woodlock said. In February, the first all-girls BSA troop was chartered in the De Soto Area Council. Woodlock noted that while girl and boy scouts do participate in some activities together, their troops are separate.

“We have boy dens and girl dens, so they still have their opportunity to develop in a similar fashion to their peers, and boys have their boy time and girls have their girl time, too (in Cub Scouts),” he said. “And with Scouts BSA … there are girl troops, female troops, and male troops, so two totally separate organizations, so again, they have their single-gender kind of opportunities there.”

Woodlock said his son, Edge, thought the experience of presenting the report to the governor was cool. He said Hutchinson was pleased about Evan’s report.

“He seemed pleased hearing the positive things that are going on. He’s a believer in the Scouting program. He sees it as an opportunity for Scouts to learn about leadership, role-planning, life skills,” Woodlock said. “He seemed to enjoy hearing the reports from all the Scouts, especially in front of a large group.”

Next month, the De Soto Area Council’s annual summer camps will begin at Camp De Soto. Day Camp will begin June 3 and last through June 7 and Arrow of Light Camp will be June 13 through June 15. Derby Weekend was rescheduled to take place May 17 through 19 due to inclement weather reports last weekend.

To learn more about the BSA, Cub Scouts or the De Soto Area Council, call 870-863-5166 or visit desotoareacouncil.org. 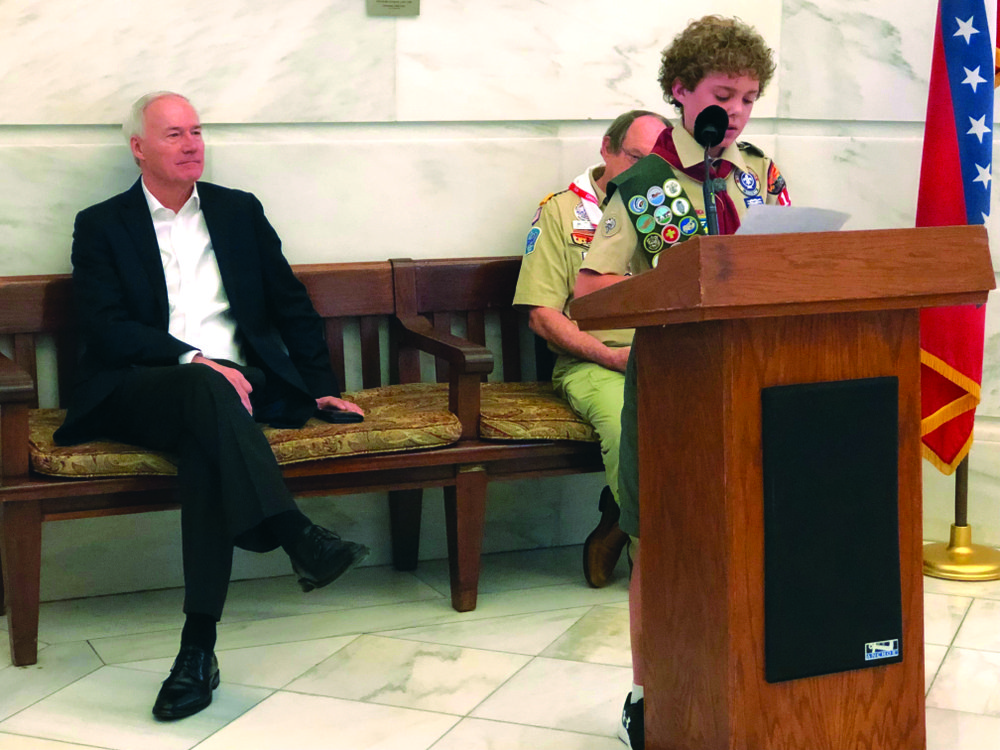