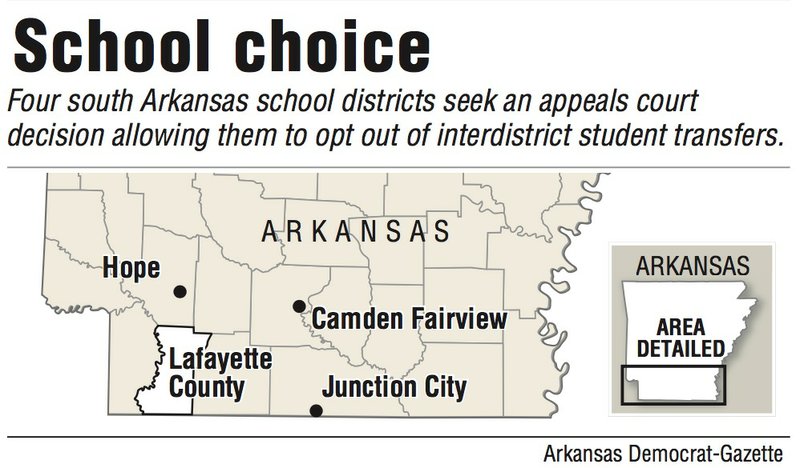 Four school districts have asked a federal appeals court to affirm a lower court's decisions that enable the districts to opt out of interdistrict student transfers when the School Choice Act transfers interfere with long-standing school desegregation obligations.

Attorneys for the Hope, Junction City, Lafayette County and Camden Fairview school districts and for black families in those districts submitted arguments to the 8th U.S. Circuit Court of Appeals at St. Louis in support of Jan. 17 decisions by U.S. District Judge Susan O. Hickey.

The attorneys said Hickey did not abuse her authority by modifying the districts' federal court-approved desegregation plans and decrees to prohibit segregative student transfers in or out of the four districts -- except in cases of education or compassionate need.

The Arkansas attorney general's office -- representing the state Department of Education and Board of Education -- appealed Hickey's rulings to the 8th Circuit earlier this year. Attorneys for the districts and for the black plaintiffs in the districts' federal school desegregation cases submitted their written defense of Hickey's orders Thursday. The arguments were made public Friday.

"They ask this Court to turn a blind eye to any lingering effects of the past state mandated dual system," the school district and plaintiff attorneys wrote in response to the state appeal. "The District Court refused to do so. That was not an abuse of discretion and this Court should affirm each of the orders," the school district attorneys wrote to the 8th Circuit.

The four attorneys who jointly submitted the arguments are:

• Allen Roberts and Whitney Moore for the districts.

• Rep. John Walker, D-Little Rock, and Shawn G. Childs for the black plaintiffs in the older federal school desegregation cases in all but the Junction City case.

The federal government -- the plaintiff in the Junction City federal desegregation lawsuit -- declined to file a brief on the current issue.

Nearly all of Arkansas' 238 school districts participate in interdistrict transfers under the terms of the School Choice Act of 2017. Exceptions include the districts in Garland County that operate by court order under an earlier version of the law.

Amanda Priest, a spokesman for Arkansas Attorney General Leslie Rutledge's office, said Friday that the state attorneys are reviewing the districts' legal brief and will be filing a reply to it.

"Educational opportunity should not be determined by neighborhood or income," Priest also said. "All Arkansas families deserve to have a say in their children's education."

Attorneys for the state and for families who submitted an amicus or "friend of the court" brief in support of the state's position have until July 19 to file a reply brief to the 8th Circuit.

There is no date set for oral arguments in the case before an appeals court panel. State attorneys have asked for such a hearing. Attorneys for the four school districts told the court that oral arguments are not necessary but will participate if they are scheduled.

Hickey, in separate but similar decisions in January, ordered the four districts' long-standing desegregation orders and consent decrees -- at least one of which dates back to the 1960s -- to be changed to explicitly prohibit the segregative interdistrict transfers of students from the four districts to other school districts.

The judge, however, did allow for interdistrict student transfers from the four districts if requested for education or compassionate purposes. Those special requests must be approved by a local school board on a case-by-case basis.

The judge concluded in her orders that modifications to the older desegregation orders or desegregation plans were warranted because of significant changes made in the state's School Choice law between 1989 and 2017.

The 1989 law -- on which three of the districts relied -- permitted interdistrict student transfers as long as the transfers did not adversely affect the desegregation of either a resident district or a desired district. The 2017 law requires districts seeking waivers from participating in choice to show that their federal court-approved desegregation plans or decrees explicitly prohibit interdistrict student transfers.

Hickey concluded in the January orders that the "changes in the governing school choice statutory framework -- and the ensuring requirements and limitations -- have an actual effect" on the districts' ability to comply with their desegregation obligations. Hickey also said the modifications to the districts' desegregation orders and plans are tailored to the changed circumstances.

In this week's 71-page submission by the four school districts and plaintiffs, attorneys said Hickey's orders "simply" allow districts to claim an exemption to participating in the School Choice Act transfers starting with the upcoming 2019-20 school year.

Among their arguments in support of Hickey's rulings, attorneys for the districts and plaintiffs told the 8th Circuit that the modification orders do not impose new interdistrict desegregation remedies on the school districts that have been obligated to racially desegregate schools within their boundaries.

The legal brief describes some school choice history in the state and in the particular districts, and how desegregation obligations led the districts in 2018 to ask the Education Department and Education Board to be exempt from allowing students to transfer to schools in districts in which they don't reside.

The state agency and board denied the exemptions. That led to the districts asking Hickey to rule that the interdistrict student transfers would put the districts in conflict with their desegregation obligations.

The attorneys for the districts and plaintiffs told the 8th Circuit that Hickey made no mistakes of law in her orders and did not abuse her discretion when she found modifications to the desegregation plans and decrees were warranted and "suitably tailored."

"They do not fashion interdistrict remedies," they wrote. "The orders do not bind any other school district or in any way interfere with their governance or internal operations."

The attorneys wrote that the district court's decisions to modify the long-standing court decrees and desegregation plans resulted in a declaration that segregative interdistrict choice transfers interfered with binding federal court orders.

The decisions also enable the districts "to comport" with the School Choice Act provisions calling for an explicit bar to interdistrict student transfers, the attorneys said.

Data on the racial makeup of students requesting interdistrict transfers in this past 2018-19 school year was included in the legal brief. There were 13 applicants -- all white -- to leave Camden Fairview; 69 applicants -- two of whom are black -- to leave the Hope district; five applicants from Junction City; and 42 applicants to leave the Lafayette County district. All sought schools districts that had higher percentages of white students, according to the court filing.

The attorneys for the four districts and plaintiffs in the federal cases acknowledged that the newly modified federal cases have been around awhile.

"These are admittedly old cases," they wrote. "In this respect, age does not matter. [The] districts have an affirmative duty to desegregate, and that duty constitutes a continuing responsibility not to impede the process of dismantling its former dual system that is not limited in time or duration, but imposes a continuing legal obligation to desegregate until the vestiges of segregation have been eliminated."