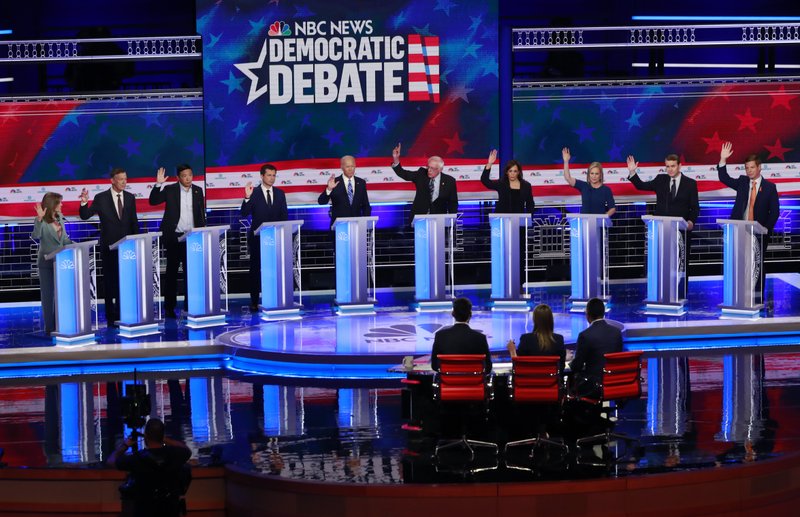 MIAMI (AP) — The Latest on the second Democratic presidential debate (all times local):

Candidates in the Democratic presidential debate are echoing calls for greater gun control measures, though there was little consensus on how to be the most effective.

Former Vice President Joe Biden championed his past work of what he said was beating the National Rifle Association.

California Sen. Kamala Harris says Swalwell's idea is "a great one." But she says, "The problem is Congress has not had the courage to act."

Harris says as president she will give Congress 100 days "to pull their act together" and get a bill to her desk. If not, she promises wide-ranging executive action on gun control.

Candidates on stage at the Democratic presidential debate are struggling to limit their answers to the one thing they would hope to accomplish as president.

Others followed with lists and nonspecific goals, such as Vermont Sen. Bernie Sanders calling for a "political revolution" and former Vice President Joe Biden pledging to beat Donald Trump.

Author Marianne Williamson notably said she would call the Prime Minister of New Zealand and declare the United States a better country to raise children.

Moderator Chuck Todd graded the group a C-minus for their adherence to the rules.

But they're offering few specifics at Thursday's debate, and only former Colorado Gov. John Hickenlooper named climate change as the first issue he'd tackle on Day One of his presidency.

Vermont Sen. Bernie Sanders says if the Supreme Court overturns the ruling legalizing abortion, women would have access to the procedure when he's president through his health care plan, "Medicare For All."

Several states have passed restrictions on abortion in recent months. Conservatives are hoping the laws will make their way to the Supreme Court, where a new conservative majority could reverse Roe v. Wade.

Sanders said during Thursday's Democratic presidential debate that Medicare For All "guarantees every woman in this country the right to have an abortion if she wants it."

He also said he would only nominate justices who support Roe v. Wade, and he believes justices could be rotated to other courts to "bring in new blood" to the Supreme Court.

Former Vice President Joe Biden is the focus of a discussion on partisan gridlock among some Democrats vying for the chance to challenge President Donald Trump.

Colorado Sen. Michael Bennet said Thursday night at the second of two Democratic debates that the key to making progress is winning back the Senate and ousting Republican Majority Leader Mitch McConnell.

In response, Biden said he secured bipartisan funds for cancer research and led the charge to win back congressional seats, arguing, "Sometimes you have to just go out and beat them."

Sen. Kirsten Gillibrand rounded out the discussion, promoting her plan for "clean," publicly funded elections and saying Republicans implemented tax cuts "to pay back their donors."

In an emotional exchange, Sen. Kamala Harris challenged Joe Biden's stance on busing to desegregate public schools during the 1970s, telling the former vice president that she was bused as a child two decades after the Brown v. Board decision to end the separate but equal policy in the American education system.

Harris told Biden on Thursday that she did not believe he is a racist, but that his recollection of working with segregationist senators a generation ago in discussing partisan gridlock in Washington today was "hurtful."

Biden said Harris was mischaracterizing his position. Harris asked Biden, "Do you agree today that you were wrong to oppose busing in America?"

Biden said he didn't oppose busing but federal intervention in the issue. Harris shot back: "There are moments in history where states fail to support the civil rights of people."

Candidates on the second night of the Democratic presidential debate are continuing to highlight Russia and China as geopolitical threats to the United States.

Yang says Russia "is our greatest geopolitical threat because they've been hacking our democracy successfully." Yang says, "They've been laughing their asses off about it for the last couple of years."

Buttigieg says, "The biggest thing we've got to do is invest in our own domestic competitiveness."

All but one Democratic candidate onstage for the second night of the presidential debate say they would make illegal border crossings a civil, not, criminal offense.

Colorado Sen. Michael Bennet was the only one of 10 candidates Thursday night to not raise his hand to seek to decriminalize illegal border crossings.

South Bend, Indiana, Mayor Pete Buttigieg (BOO'-tuh-juhj) says he would end the felony criminalization because it is "dead wrong," and called Republicans who "cloak" themselves "in faith" hypocrites for letting children languish in cages.

Former Vice President Joe Biden promised a "surge" of aid and relief workers to the border to release children from the enclosures and reunite them with their families.

Asked about the Obama administration's deportation of 3 million, Biden said the president that he served under "did a heck of a job" and that it would be wrong to compare him to President Donald Trump.

The Democratic candidates squaring off on the second night of presidential debates are decrying the Trump administration's immigration policies, but in different ways than those who debated the previous night.

California Sen. Kamala Harris promised Thursday to use her first day in office to help people brought to the country illegally as children become citizens. She declared she'd use "the microphone that the president of the United States holds in her hand" to be a voice for real reform on the issue.

On Wednesday, Democratic presidential hopefuls blamed Trump for the deaths of a father and his daughter found lying face-down near the Rio Grande.

Trump is at a bilateral meeting with German Chancellor Angela Merkel in Japan. But he said that he "passed a TV set" and saw the Democrats debating.

All Democrats on the stage for the second night of the debates Thursday in Miami raised their hands when asked if they would give health care to migrants in the country illegally.

He then added: "That's the end of that race!"

All 10 candidates at the second Democratic presidential debate say their proposals for government health insurance would include coverage for immigrants in the country illegally.

Former Vice President Joe Biden and Mayor Pete Buttigieg of South Bend, Indiana, argued Thursday that not discriminating against covering all immigrants is humane, fiscally responsible and a matter of public health.

Buttigieg says even immigrants in the country illegally pay sales taxes, indirect or direct property taxes and, in many cases, payroll taxes.

Biden says covering everyone means more people would get primary care and wouldn't have to wait until they needed emergency room care that taxpayers have to finance. Federal law already requires ERs to treat anyone in need.

Only two of the 10 candidates on the second night of the 2020 Democratic presidential debate raised their hands when asked who supported abolishing private health insurance.

Vermont Sen. Bernie Sanders and California Sen. Kamala Harris both signaled their support for "Medicare for All" and eliminating private insurance.

The question was also asked on Wednesday to the first 10 debate candidates. Massachusetts Sen. Elizabeth Warren and New York City Mayor Bill de Blasio were the only two to raise their hands.

Several Democratic presidential candidates are talking about the importance of health insurance in their personal lives as their family members were dying or they dealt with their own illnesses.

Vice President Joe Biden recalled during Thursday's Democratic presidential debate the deaths of his first wife and baby daughter and, years later, his adult son. He says the best way to ensure all Americans have coverage is to build on "Obamacare" rather than to pass "Medicare For All."

South Bend, Indiana, Mayor Pete Buttigieg (BOO'-tuh-juhj) says as his father was dying earlier this year, he didn't have to make medical decisions based on cost because his father had Medicare. He says all people should have the option to access "Medicare for all who want it."

Generational differences have quickly taken center stage at the second night of the Democratic presidential debate, with a light shown on the age of 76-year-old front-runner Joe Biden.

Thirty-eight-year-old California Rep. Eric Swalwell recalled being only 6 years old when he saw Biden speak, saying the former senator and vice president was "right when he said it was time to pass the torch to a new generation of Americans."

Biden's contemporary, Vermont Sen. Bernie Sanders, argued the issue "is not generational," insisting the field should be focused on things like "who has the guts to take on Wall Street."

California Sen. Kamala Harris added her voice to the fray, saying, "Hey, guys. You wanna know what America does not want to witness? A food fight. They want to know how they're going to put food on the table."

Three of the senators running for president are calling for health care reform without even waiting for questions about it.

Sen. Michael Bennet of Colorado said at Thursday's Democratic presidential debate that he agreed with Vermont Sen. Bernie Sanders that "health care is a right" for all Americans. But he questioned Sanders' "Medicare for All" plan that would extend coverage to everyone in the country, saying the U.S. isn't ready for it.

Sanders smirked as he listened to Bennet's answer before defending his plan. Then, unprompted, New York Sen. Kirsten Gillibrand jumped in and said that she wrote the portion of the bill that Sanders had proposed that would transition the country toward Medicare for All plans.

Struggling to restore order, the moderators said repeatedly that they'd "get to" health care questions later.

Former Colorado Gov. John Hickenlooper is defending his warnings on the Democratic Party veering toward socialism.

Hickenlooper said Thursday at the second Democratic presidential debate that if Democrats fail to clearly define themselves as not being socialists, Republicans are going to come at the party "every way they can and call us socialists."

Hickenlooper says, "We can't promise every American a government job."

Former Vice President Joe Biden became the first to invoke Donald Trump during the second round of the Democratic presidential debate, blasting the Republican president for crediting wealthy Americans for building the nation.

Biden says Trump has "put us in a horrible situation," by signing tax cuts that favor higher-income Americans. Biden says he would make "massive cuts" in the 2017 act's loopholes and be "about eliminating Donald Trump's tax cuts for the wealthy."

However, Biden did not address directly the question to him, which was about comments he made during a recent fundraiser, where he assured donors their lifestyles would not suffer by the tax cut reversal.

Vermont Sen. Bernie Sanders is acknowledging that his proposals for sweeping government programs would require middle-class Americans to pay more taxes. But he says they'd still spend less on health care under his system than they do today through the private insurance system.

Sanders said Thursday at the second Democratic presidential debate that education proposals would be paid for by taxes on the wealthy and corporations. But he confirms that other Americans would have to pay more taxes for his health care program, in lieu of the existing system of private premiums, deductibles and co-pays.

The second debate of the 2020 Democratic presidential debate is kicking off with 10 more candidates, including many of the leading White House hopefuls.

Joining them for the two-hour event are two other top contenders: California Sen. Kamala (KAH'-mah-lah) Harris and South Bend, Indiana, Mayor Pete Buttigieg (BOO'-tuh-juhj). At either end will be the candidates polling at the bottom of the field: author Marianne Williamson and California congressman Eric Swalwell.

Candidates will not get opening statements but will have time for closings.