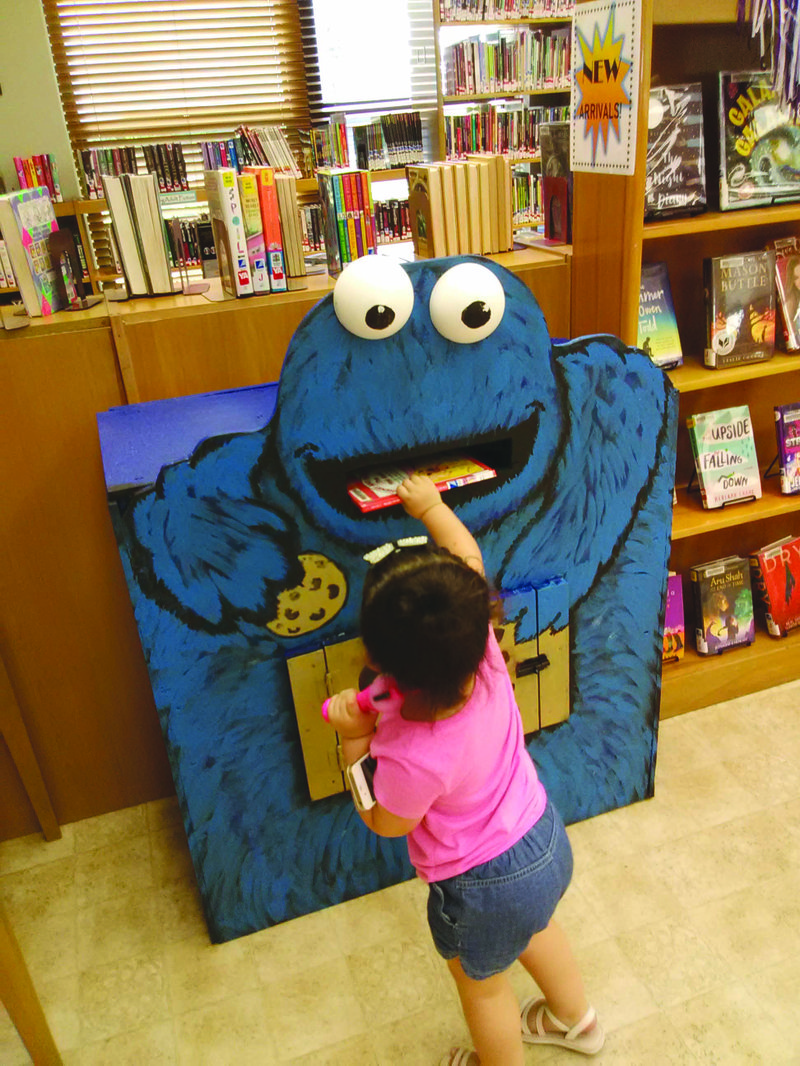 Cookie Monster: Amira, age 2, excitedly drops a book in the new Cookie Monster themed book return in the Children's room at Barton Library. The book drop was created by Bob Stephenson and painted by Mike Means, along with other volunteers at The South Arkansas Arts Center.

Children returning books at Barton Library will have a new option with a Cookie Monster themed book drop.

Karla Nelson, children’s librarian, said the book return box was built by Bob Stephenson and painted by Mike Means, along with other volunteers from the South Arkansas Arts Center. She said the idea came about when Stephenson and Means were in the library one day and she mentioned that a Cookie Monster themed book drop would be a great project for the pair, and they agreed.

Nelson said the book drop was installed Saturday, as she wanted to have it in place before the library’s summer reading program began. Registration for the free program is being held this week, though children will be able to join it at any point over the summer, if needed.

Nelson said she thought such a project would be good for the children, who often struggle to identify the normal book return drop at the library. Plus, she said, this way, the children won’t have to wait in line and will be able to return books in a more fun and easy way.

“They check out a whole lot more than the adults do,” Nelson said.

The project is just one more way that SAAC and Barton Library have worked together. Nelson said she does a lot of work with SAAC and the organization often helps provide volunteers and other attractions for children visiting the library. She noted that often SAAC actors will read to children during the story time hours in full costume for whatever production is being worked on, adding that Stephenson has even read in full pirate gear when SAAC was putting on “Peter and the Starcatcher,” a prequel to Peter Pan.

During that production, SAAC and Barton worked together on a treasure hunt at Barton where the winner received a full pirate costume designed by SAAC costumer Kaila Emery.

Nelson said children in the program will receive a prize for every five books they read. They will be able to either choose a prize from Nelson’s treasure chest or select a food coupon from an area restaurant. Although Nelson is still gathering those prizes, she said she has already received prizes to give away from Taco Bell, McDonald’s, Popeye’s, Arby’s and Burger King.