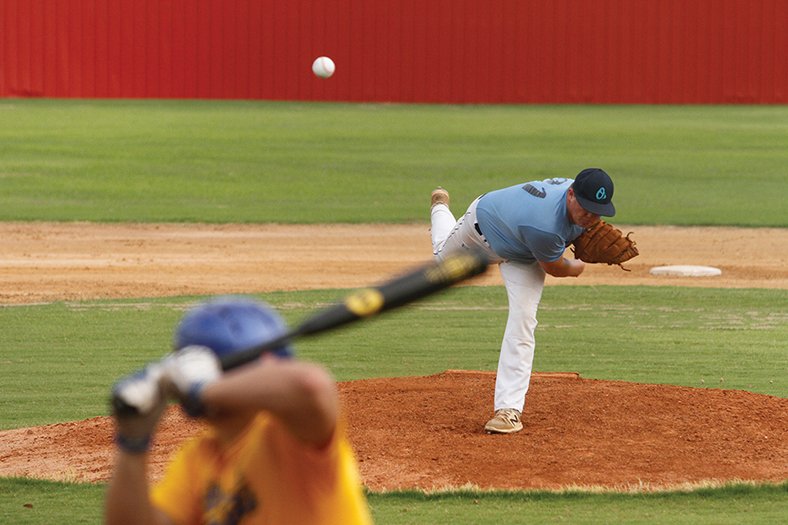 Terrance Armstard/News-Times El Dorado Oilers pitcher Reece Griffin throws a pitch during a game against Sheridan earlier this season at Norphlet. The Oilers were downed by the Monroe (La.) Majors 13-5 Tuesday, and will be back in action Thursday for a Zone 4 doubleheader at Arkadelphia. Game time is set for 6 p.m.

Carson Jones belted a three-run homer in the first to get the offensive fireworks started, as the Monroe (La.) Majors raced out to a 12-1 lead before topping the El Dorado Oilers 13-5 Tuesday night.

Jones’ three-run shot in the first gave the Majors a 3-0 lead before a four-run second and a three-run third pushed the lead to 10-0.

The Oilers (11-10) scored a run in the third, but the visitors answered with two runs in the fourth.

The Oilers banged out 10 hits in the loss with Charles Hoof going 3-for-4 with two RBIs in the contest.

Hoof got the Oilers on the scoreboard in the third with a two-out double that scored Reed Stone, who led off with a single and stole second.

In the fourth, Nick Impson drew a one-out walk and scored on a two-out double to left-center by Cade Schibler to make it 12-2.

The Oilers drew a run closer in the fifth.

With one out, Landen Rainwater walked and stole second.

Baylor Brumley was then hit by a pitch to put two runners on, and Hoof ripped a double to center to score Rainwater to make it 12-3.

After the Majors scored a run in the seventh, the Oilers scored twice in the bottom half of the inning to make the final margin.

The Oilers loaded the bases on a double by Stone, a single by Hoof and a walk to Reece Griffin.

Tyler Johnson then laced a two-run single to right-center to pull the Oilers within 13-5.

Johnson later stole second to put runners at second and third, but the Oilers would get no closer.

In addition to his three hits, Hoof stole a base and scored a run.

Stone went 2-for-3 with two stolen bases and two runs scored, while Christian Webb went 2-for-3.

Johnson, Schibler and Impson each had one hit for the Oilers.

Johnson drove in two runs and stole a base, Schibler had one RBI and one stolen base and Impson drew a walk and scored a run.

Rainwater had a walk, a stolen base and scored a run.

Griffin took the loss after allowing five runs (three earned) in 1 2/3 innings. He allowed three hits, walked three and struck out one.

Brumley allowed three runs (one earned) in 2/3 of an inning. He walked three, didn’t record any strikeouts and allowed two hits.

Impson surrendered four runs (two earned) and two hits in 1 1/3 innings. He didn’t have any walks or strikeouts.

Stone walked one in a scoreless 1/3 of an inning, and Johnson allowed one unearned run in 2 2/3 innings. He walked five, struck out one and didn’t allow any hits.

Alex Burris finished with a scoreless 1/3 of an inning.

The Oilers will play a Zone 4 doubleheader Thursday at Arkadelphia.