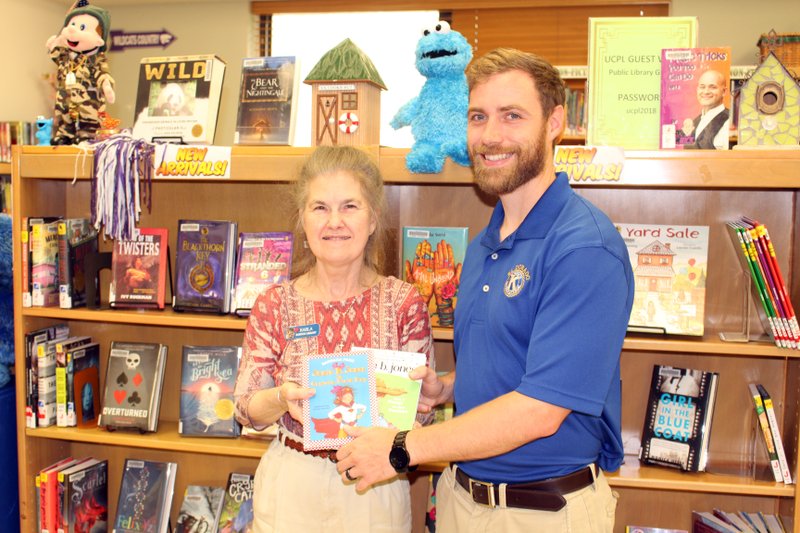 Jaren Books, vice president of the Kiwanis Club of El Dorado, recently returned to town from Kiwanis International’s annual convention, bringing with him new ideas for ways Kiwanis can serve the community.

The convention, held last month in Orlando, Florida, brought Kiwanis Club representatives from all over the world together for several days to learn about the various service projects the international organization is currently engaged in.

Kiwanis International is currently working on several health-oriented initiatives. The Go All in for Kids Challenge is a fundraiser where funds are directed to the Eliminate Project, aimed at eliminating maternal and neonatal tetanus from the world, or towards eliminating iodine deficiency disorders, caused by a lack of iodized salt in a person’s diet.

“I’d never even heard of some of those issues before the convention,” Books said. “The international organization has actually gone to some countries to test the salt levels.”

At the convention, Kiwanians also had the opportunity to participate in service projects benefitting the Orlando community. Books said convention-goers always try to do community service for the city the convention is held in each year.

“The cool thing was that it was in Orlando at Disney, so we got to go to Disneyworld. To kick off the convention, they had a little fairy come in and do a little thing and she made it snow in Orlando in the convention center in June,” Books said, adding that he also saw Mickey and Minnie Mouse and Chip and Dale. “Because I have a child, they sent me.”

Books said there were three local service projects for this year’s convention city: making dolls for residents at Children’s Miracle Network Hospitals, making bookmarks and donating books to area schools and youth facilities through Reading is Fundamental (the largest children’s literacy nonprofit in the United States) or making no-sew blankets to be donated to Project Linus, who distributes blankets to children in need.

Books was chosen as Kiwanis El Dorado’s delegate to the convention in April, so after choosing his service project, he got in touch with Karla Nelson, children’s librarian at Barton Library.

Nelson said the “Junie B. Jones” series is very popular with the girls that visit the children’s library. Her copies are old and worn from all the use they’ve seen. While Nelson is always glad to see the books get use, she is also excited that the children visiting the library will have new options.

“I’d mentioned the “Junie B. Jones” …because I’ve had a lot of girls coming in and asking for those,” Nelson said. “They’re kind of timeless. I don’t think they’ll ever go away.”

The children’s library is a hotbed of activity during the summer months. Yesterday alone, almost 100 children attended events held there, and other summer days have seen even more children.

“The ones I have were so old,” Nelson said. “My “Junie B. Jones,” they won’t stay on the shelf. As soon as I check them in, they’re back out in a couple hours, or a couple days at the longest.”

Kiwanis El Dorado has a two-pronged service mission, Books said, centered around fundraising and community service projects. The Kiwanis Club is mainly focused on initiatives that better the lives of children. There are appendant organizations for teenagers and children to participate in as well – Key Club and K-Kids, respectively.

“Our big slogan is ‘Kids Need Kiwanis,’” Books said. “We actually have a Key Club … it is students at El Dorado. They do their own projects and their mission is the same as ours – they just do it the way they see fit.”

Civic organizations like Kiwanis Club have seen decreases in their membership in recent years. Books said the Club is currently trying to draw in younger members.

As a young member himself, Books said the benefits he’s gotten from being a Kiwanian, both personally and professionally, though hard to quantify, have been immense.

“For me, it’s the community of people. They’re like-minded people, we’re kind of like a family,” Books said. “It’s nice to have that mentorship aspect of the Club, because they’re great mentors – people that direct you and guide you in whatever you’re doing in life. … Everybody’s there to see you succeed.”

Kiwanis Club of El Dorado meets each Wednesday at noon at the First Presbyterian Church, located at 300 E. Main St. The Kiwanis Club is currently preparing for their annual Pancake Day, tentatively planned for late October or early November.

“We’re always looking for individuals that are looking to serve the community and serve the local children,” Books said. “We help provide that avenue of service.”