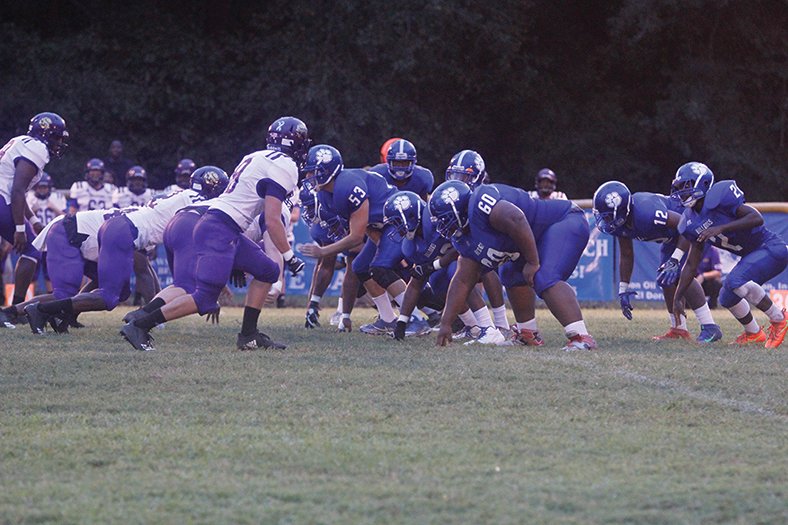 Terrance Armstard/News-Times In this file photo, Strong's offense gets ready to run a play during their game against Junction City during the 2018 season at Jerry Burson Field. The Bulldogs are set to resume summer workouts next week.

As Sirl Wright gets ready to start his second year on the job as Strong’s football coach, it seems things are starting to fall into place.

Hired just over a year ago, Wright is in the middle of his first full offseason with the Bulldogs.

“Since we’re really one of the smaller schools in the state, we’ve just been putting things together one thing at a time,” Wright said. “We’re really going to start picking it up after dead week is over. Everything is transitioning smoothly. Going from a 4A program down to a 2A/1A program, it’s a lot of budget changes, a lot of expectation changes, so we’re just trying to build a foundation and then take it one step at a time.”

Strong attended a camp at Louisiana-Monroe last year, and Wright is hoping to do it again this year.

“That’s going to be my goal is to do it again this year,” Wright said. “We’re going to start workouts again next Monday. We’ll work out pretty much through July three days a week, and hopefully I can get a good core group to go to ULM and show them how to raise their expectations. We’re pretty young this year, so I want to try and get some of these young pups exposed to college programs.”

One player that Wright singled out for his work was junior Jayson Edwards.

“He will be a junior, and he had a great spring,” Wright said. “He was right at the cusp of benching 400 pounds.”

Strong struggled with numbers last year, and Wright is hoping that will improve this year.

“We had a good spring where we had a projection of a minimum of 18,” Wright said. “There were a lot of kids saying they were going to come out and play, but I don’t guarantee you playing until I start seeing you in pads on a normal basis. In the spring, it seemed we were going to have a starting higher number than we did last year.

“Last year, we didn’t have 11 in the preseason, so it was kind of hard to go over plays because we didn’t have a full unit. Then the ones that could play, once they got there, they didn’t know anything. Some knew the system a little bit, but they weren’t physically ready for that demand. We went into last season bare-bones, and hopefully this year, we’ll be a little bit more advanced and we’ll give a better showing this fall.”