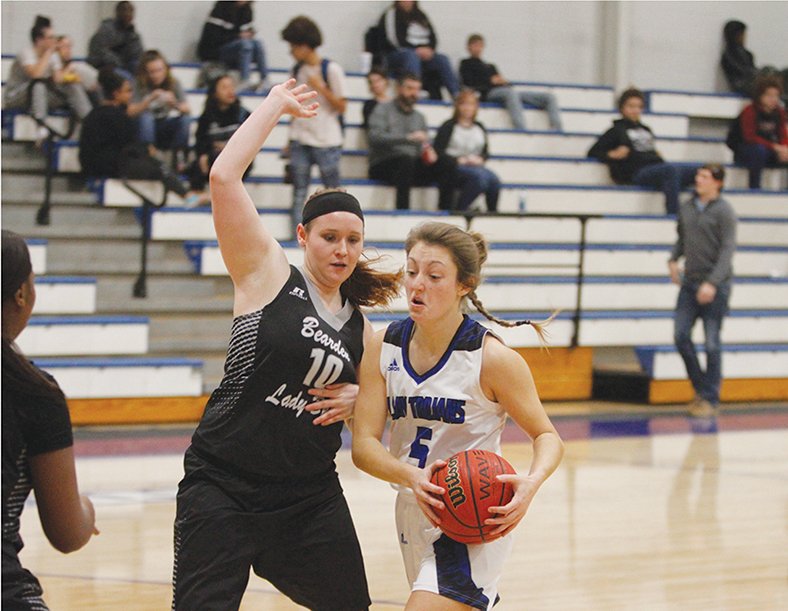 Terrance Armstard/News-Times Parkers Chapel's T.K. Burson tries to drive past Bearden's Evie Porter during their league contest at Parkers Chapel Tuesday. The Lady Trojans came away with a 45-35 win.

PARKERS CHAPEL - Parkers Chapel used a 3-D attack of depth, defense and determination Tuesday in a hard-fought 45-35 victory over Bearden in 2A-8 girls action. The Lady Trojans improved to 7-9 while the pesky Lady Bears fell to 2-12.

Parkers Chapel was in control until foul trouble hit hard midway in the third. Bearden cut an 8-point deficit to 34-32 with 7:12 left in the fourth quarter. But, the Lady Trojans held the Lady Bears without a field goal the rest of the way.

“Anytime you get a conference win, I’m thrilled to have one,” said PC coach Justin Welch. “The girls were excited. It was a complete team effort. I thought the bench had some energy there down the stretch. I thought they did a good job.”

T.K. Burson got the Lady Trojans off to a 7-1 lead with five quick points, including a 3-pointer. Bearden would slice the margin to 13-11 at the end of the first quarter.

The Lady Bears tied the game but Burson’s drive ignited a 9-1 run, capped by Taylor Fortune’s 3-pointer, which pushed the lead to 22-14 midway in the second. The Lady Bears closed to within 23-20 at the half after a 3-pointer by LaTreese Wright.

Without two of their top ball handlers, the Lady Trojans were suddenly under fire from Bearden’s full court pressure.

“You never know how they are going to react. I thought once they settled down, we were good,” Welch said. “At one point, I had four sophomores and a junior out there during that stretch. They played their part and got the job done. That was good because foul trouble is going to happen throughout the season.”

The Lady Trojans led 34-26 going into the fourth before Bearden’s Evie Porter drained back-to-back 3-pointers, cutting the deficit to 34-32 with 7:12 still left to play.

It was the 5-foot-2 Looney who stepped up offensively. Her drives to the basket produced two fouls, which she converted into 3-of-4 at the line. Wood then slipped inside for a lay-up off an inbounds play as the lead swelled to 39-32 with 3:24 remaining.

Porter hit two free throws for Bearden but Fortune scored off an offensive rebound before Thomas re-entered the fray and scored immediately on a coast-to-coast drive. Looney hit a pair at the line in the final seconds to nail down the win.

Looney led PC with 13 points, 12 of those coming in the second half. Nine of her points came at the line.

“She steps up. With her being a sophomore, sometimes it’s growing pains,” said Welch. “She’s so mentally tough. She just grinds. I thought she did a really good job.”

Fortune scored 11 with Burson adding nine. Kamryn Cross, Thomas and Wood all chipped in with four.

“I thought Taylor did a good job and Kam inside made a couple really good moves in there. It was a real physical game,” said Welch. “Taylor was able to step out and stretch the zone. She hit a couple outside shots. That helps on that zone because it opened up the middle.”

Wright and Porter led Bearden with 17 and 12, respectively.

HOPE - The Lady Dragons went on the road and shocked Spring Hill on Tuesday. Junction City improved to 4-3 with its fourth straight victory. The Lady Bears fell to 10-2-1.

PRESCOTT - The Lady Bucks’ five-game winning streak ended with a loss in 7-3A play.

Jordyn White had 12 points to lead Smackover (7-10, 1-3), while Camree Jones chipped in with seven points.

Smackover will be at home for a conference tilt against Bismarck Friday.