The legend of Boggy Creek lives on 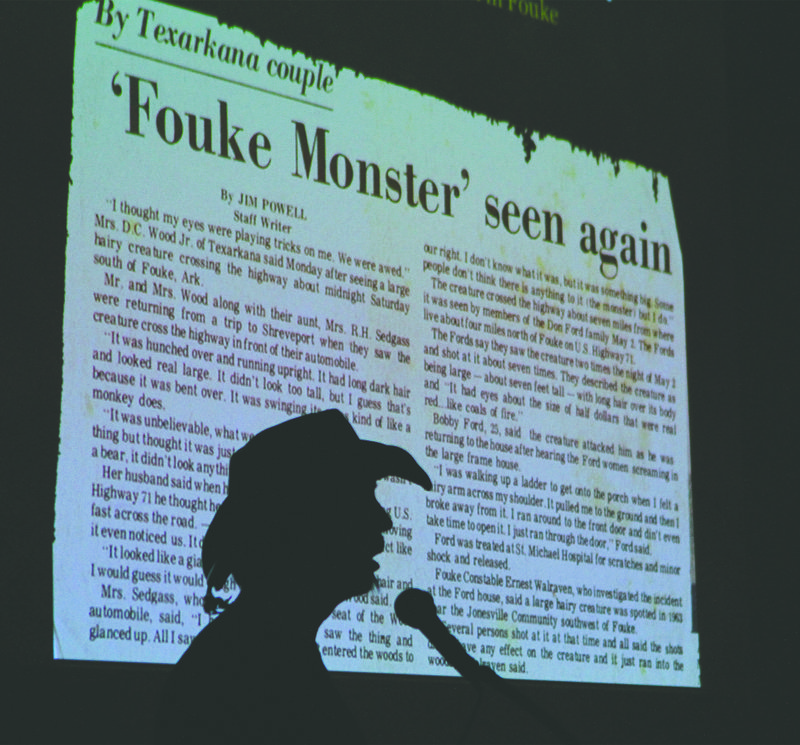 Fouke monster: Author and documentary filmmaker Lyle Blackburn lectures during the “Legend and Lore - The Beast of Boggy Creek” presentation at the Arkansas Museum of Natural Resources on Sunday. Over 120 people attended the event to learn of the infamous Fouke Monster.

“I saw one” said one person.

“I knew this lady that saw it,” claimed another person.

“I’ve never seen one,” a man adamantly claimed as chatter over shared experiences filled the atmosphere at the Arkansas Museum of Natural Resources on Sunday afternoon.

Over 120 people paid a visit to the museum to attend the “Legend and Lore - The Beast of Boggy Creek” presentation by Lyle Blackburn.

Blackburn is the author of “The Beast of Boggy Creek: The True Story of the Fouke Monster” and several other books within the same genre.

Sherry Odom, facilities manager at the Arkansas Museum of Natural Resources, said it all started with a stuffed Bigfoot that was on sale in a catalog. Odom thought the item would be a good fit to carry in the museum because of the stories surrounding the well-known Fouke Monster of Arkansas.

“I started to do some research on Bigfoot because I knew there was the Fouke Monster and I came across Lyle Blackburn’s website,” she said.

Odom, who contacted Blackburn last fall, sent him an email to see if an arrangement could be made for him to speak.

“I wanted to see if he would possibly consider coming to the museum — and he did,” Odom said.

Many people from various backgrounds attended the lecture and sat quietly as Blackburn, a writer, researcher and documentary filmmaker, delivered a mind-tickling presentation on the facts surrounding the folklore of the Fouke Monster.

Blackburn began his presentation by discussing the film which was based on accounts of several sightings of a creature in the Fouke area.

“The most famous southern Bigfoot case is ‘The Legend of Boggy Creek,’” Blackburn said.

Blackburn, who delivers an average of 15 presentations a year, said that people everywhere know of the story and of Fouke and Arkansas. Blackburn said that when he was young, he attended a drive-in movie with his parents and saw the film.

“Sure enough I saw that movie as a kid and it grabbed a hold of my imagination” he said.

He said he knew of instances that involved creatures such as Bigfoot and the Lochness Monster, but that those were in far away places; however, he could embrace “The Legend of Boggy Creek” film story because it was in his own backyard.

“Even though I’m in Texas, I’m only three hours away,” he said. “I went camping and hunting with my father in Arkansas and Texas,” he said.

Blackburn would eventually grow up and tour with musicians. Working as a freelance writer, Blackburn began to want to pen his own book, settling on his favorite subject, the Fouke Monster. Writing the book led to meeting the people in which the movie was about; people Blackburn said he gained respect for and from after being persistent with his research and respectful of sources.

After writing his first book, “The Beast of Boggy Creek,” Blackburn said he began receiving calls from television producers wanting to know more about the Fouke Monster. Blackburn has appeared on “Monsters and Mysteries in America” and “Finding Bigfoot” television shows. He also co-produced a documentary on the subject.

Blackburn holds the original “Legend of Boggy Creek” film in high regards and claims it made the region and story known to the Bigfoot community.

“The movie had a great affect on the area. The iconic poster is recognizable and is only second to the well-known Patterson-Gimlin film,” he said, referring to the 1967 film footage in which Bob Gimlin and Roger Patterson captured a Bigfoot creature walking along Bluff Creek in Orleans, California.

“The Legend of Boggy of Boggy Creek” was made by then Fouke Mayor Charles B. Pierce, also known as “Mayor Chuckles,” in 1972 and became a huge hit.

“The movie was based on real reports,” Blackburn said. “It (Fouke Monster sightings) didn’t just start in the 1970s, and it did not end there either.”

He said The Texarkana Gazette reported on multiple accounts of people encountering the creature around the Sulfur River bottoms in Fouke and that the coverage helped propel the popularity of the film and the interest in the story.

Blackburn clarified that the “monster” part of the name was provided by a newspaper, but that very often the accounts were similar to the Pacific Northwest Bigfoot sightings with the only difference being region.

“It was when the stories became public that people started putting the pieces together … as we started seeing Bigfoot research progress, the sightings were not just in the Pacific Northwest, they are all over,” he said.

“That booger in the woods or that ‘wildman’ your grandmother” spoke of, he says, was simply the same story as today’s Fouke Monster or Bigfoot sighting.

Kenneth Canada, who said he has studied the subject matter for a long time, has never seen one, but said his father had.

“My dad was logging in Oregon and saw one” he said.

“I’ve seen them before,” added Corina Hammonds. Hammonds said she saw it several times in Old Union in ‘94 and ‘95.

Hammonds’ sister, Daphne Schultz, said she has never seen one, but that watching the movie was scary.

“The movie terrified me and I had nightmares,” Schultz said.

Blackburn said that as a kid, he loved the stories and the fact that it was spooky, but as an adult he approaches the subject different.

“People ask me ‘what do you think it is?’” he said. “A relic hominid or human or some species of ape that survived, I can’t personally prove anything.”

He said that for some, nothing short of a body will provide proof.

“Bigfoot has become a cultural icon, and no scientist will come out and say it publicly, although behind the scenes a few might.”

As for Blackburn himself, he says, “no I don’t, because I’ve never seen one.”

“Belief implies faith, but I believe in the possibility and I interview people on a constant basis that have seen something,” Blackburn said.