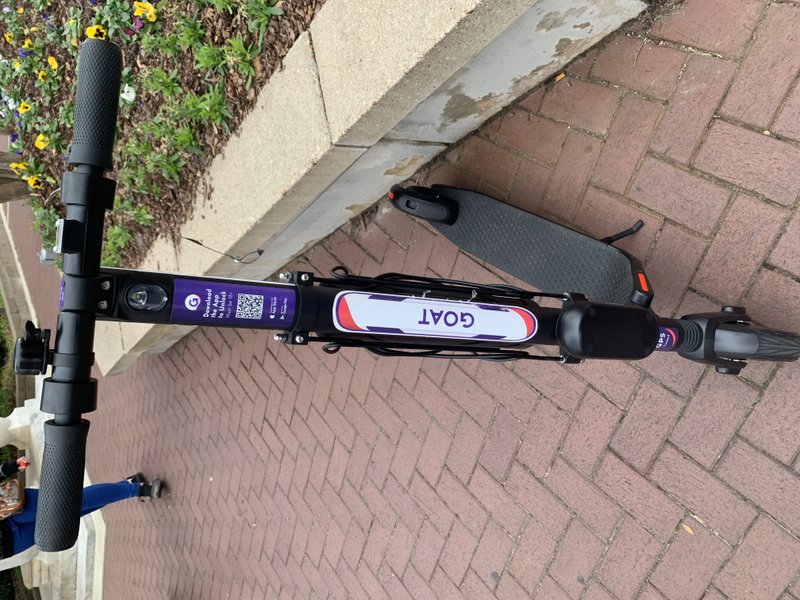 Delvin Aaron wanted to bring something to the El Dorado community and spent a year devising a plan to do just that.

On Dec. 13, his plan came to fruition: electric GOAT scooters are now available to ride throughout the city.

“I’ve been saving my money up and I’ve been trying to find something to bring or open up,” Aaron said. “I used all the money that I saved.”

Some may have seen the scooters in the Christmas Parade Dec. 12 in the back of Aaron’s truck.

GOAT scooters got its start in Austin in 2018 after Bird, Lime and countless other electric scooters descended upon the city.

GOAT, Bird, Lime and other companies offer rental e-scooters for those 18, and sometimes 21, and older all from using an app on a smartphone. For GOAT, the person who brings the scooter to town is able to set the unlock price and the ride-by-minute price.

To bring them a town, Aaron bought a business license from the city collector and named it “Ike’s Goat Ride.”

City Collector Bonnie McWilliams said the license is under Schedule C. She said all businesses within the city must have a license to operate.

She also said this is the first business of its kind to come to town.

Aaron said he first saw the scooters in Dallas and Little Rock.

“I was kind of debating on if I wanted to try it out or not,” Aaron said. “I did some research on them and thought I’d give it a shot.”

Aaron has been a lifelong resident of El Dorado and wanted to give back to the community.

He said he spoke with Mayor Veronica Smith-Creer about bringing them to town and she said there were no restrictions other than he needed a license. Aaron got the license, ordered the scooters and set them around town.

Each GOAT scooter costs $699 with a minimum order of 12 scooters, which would cost $8,388, according to the company’s website.

Aaron said he ordered the first batch and another 12 will arrive at the end of the month. He said since he put the scooters out, he’s had over 100 rides.

After downloading the GOAT scooter app on a smartphone, users are asked to read and agree to the terms and conditions. They require users to be at least 18 years old, wear a helmet, use when sober, follow the rules of the road and more. Then step onto the scooter, kick off from the ground and go.

Aaron has set the unlock price for the scooters at $1 and $0.35 per minute. The scooters can go at a maximum of 15.5 miles per hour and average about 28 miles before it requires a recharge.

When a user gets to their destination, stop the ride using the app, which ends the payment.

Not all of the scooter companies with similar rules and regulations have had an easy time making their way to cities, though.

Bird scooters unexpectedly descended upon Austin in April 2018 without receiving the proper permits, according to the Austin American Statesman. Although, the scooters first hit the streets of Los Angeles, where the company is based.

Nashville had seven scooter companies moving throughout its streets, including Spin and Lyft, until the first scooter related death in June 2019.

Forbes reported in September the number of companies has been reduced to three, allowing 500 scooters each. Companies must also pay an application fee of $500 for each scooter, and scooter’s can’t be used after 10 p.m. on weekdays or after 11 p.m. on weekends.

In May, CNBC wrote that the Centers for Disease Control found in a study emergency rooms had an increase in visits for fractures, dislocations and head trauma since rental electric scooters were released to the public. According to the report, the study began in March at the request of the health and transportation departments in Austin.

The report also stated these injuries are preventable if riders wore helmets and were more careful around cars.

Aaron said he didn’t know about the trouble other cities have had with the scooters and that El Dorado isn’t other cities.

He said there are instructions on the app before a user rides a scooter and should use them.

Aaron also said he’s building a website to host rules and regulations for the scooters and to answer questions people may have about them. He said the site will launch at the beginning of next year.