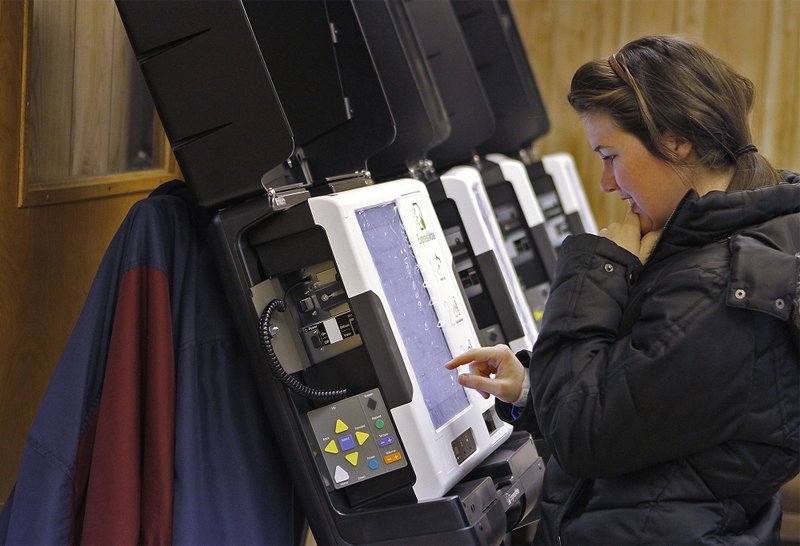 Voting Machines: In this file photo, Election Systems Software Technician Jessica Simmons inputs passwords into new voting machines for Union County in February of this year. The county received 54 ExpressVote machines last year. Officials hope switching to a voting center system will extend the use of the machines.

Union County Clerk Shannon Phillips was pressed for time Thursday when she asked members of the Union County Quorum Court to consider switching the county from a traditional, residence-based precinct voting system to what she said would be an easier 'voting center' system.

Thursday was the deadline to finalize ballots for the 2020 primary election, Phillips said, and whether the county used a precinct or voting center election system would affect how the ballots had to be written. The three-member Union County Election Commission agreed earlier this year that they preferred a voting center system, but that decision required approval from the Quorum Court.

Switching to a voting center system could require some changes to polling locations for Union County voters, as well as some investment from the Quorum Court.

In 2013, the Arkansas legislature passed Act 1389, introducing voting centers to the state. Voting centers, as defined by the law, are Election Day voting locations at which a qualified voter from any precinct in the county may vote.

When Union County residents early vote, the Union County Courthouse acts essentially as a voting center — any registered voter from anywhere in the county may vote there, regardless of their address.

Until now, those voting on Election Day would be assigned to specific polling places within their voting precincts. Precincts are the divisions within the county where voters are assigned based on their addresses.

Phillips said the Election Commission decided earlier this year to make every polling site in the county into a voting center. According to a September Reuters article, states that have shifted from precinct to voting center systems have seen a sharp decrease in polling locations; but Phillips assured Justices of the Peace that that would not be the case for Union County.

"Back in February of this year, our Election Commission voted to make every polling site a voting center — not to eliminate anything, but to make it so that if you're working in Huttig and you normally work in El Dorado, you don't miss voting because you can vote in El Dorado," Phillips said. "It would cut down on some of the equipment that we have to use, because we currently have to have a machine per precinct. Every polling site would be like early voting."

Last year, the county received new electronic voting equipment from the state. The machines were provided to the county by the Secretary of State's office at no cost, and included 54 ExpressVote machines.

"The biggest problem that we have for going to vote centers or not is whether we have a secure wi-fi for all those polling places. … I'm not sure that just because a place has wi-fi, that's going to be acceptable to the Secretary of State. They're going to want something that's a little more secure for the equipment that we have," Phillips said. "If we do not use wi-fi, if we just program the machines by precinct, it's the poll books that are the issue. We can load the poll books by precinct with just those names on it, but if there are any changes, all of those people will have to vote a provisional ballot, because if they're not on a secure wi-fi, we can't make an address change to it. So you're looking at a lot of provisionals if you don't have that secure wi-fi. The secure wi-fi is the biggest thing that I see in the vote center plan document that will have to be addressed by the Election Commissioners."

Phillips suggested that the county could purchase wi-fi hotspots, which cost about $140 each. District 9 JP Benny Vestal noted that wi-fi hotspots placed around the county could also help the Union County Sheriff's Office, as their radio connection currently has several dead spots in some of the county's most rural areas. County Judge Mike Loftin said that would be possible if it is necessary.

Phillips said one polling place in the county may have to change locations to ensure they will be able to securely connect to the internet. The Three Creeks polling site is currently at the New Hope Water Association, also referred to as the Three Creeks Water Building. Loftin said they could consider moving the site to Three Creeks Baptist Church, which sits on Haynesville Highway.

For Union County voters, the switch to voting centers would change very little. All voters, except potentially those in Three Creeks, would be free to go to their usual polling place if they'd like, since the Election Commission agreed not to eliminate any voting sites. They may also vote at any other polling place they would like to.

Phillips said she thinks switching to voting centers, so long as no polling sites are eliminated, will make it easier for Union County residents to vote. Instead of racing home after work to make it to their precinct before polls close, voters could vote close to their job or their child's school instead. This could be particularly beneficial for those living in the more rural areas of the county that travel to the larger municipalities to work, or vice versa.

"Nobody wants to eliminate any voting sites, because we don't want to inconvenience anybody, but by making every one of those voting sites a center, where anybody can vote, I think you're going to have more voters and it's going to accommodate working people a lot more than the system that we currently have in place," Phillips said.

She noted that it will be important for Union County residents to update their voter registration if they have moved since the 2018 midterm elections.

"Change your address now. Don't wait until February, change it now if you've moved," she said. "If you've physically moved to a new address, we want that information now so it doesn't slow down voting at all, because this system is very different from what we've used in the past."

For Union County, the cost of holding the election could go down as a result of switching to vote centers. With a precinct system, each polling site is required to have a number of voting machines corresponding to the ballots all voters may need to use, and each voting machine present requires a number of poll workers. With a voting center system, each vote center will require fewer machines because all will have every ballot option available, and thus will also require fewer poll workers.

"It would probably stretch out the machines that we have a little bit longer, because right now, every precinct has to have a machine just for that precinct; if you do all of them as poll centers, then they would only have to have enough to accommodate their activity, the number of people that usually vote, and we can look over history and see how many people voted there," Phillips said. "Right now, we have to send a machine for Strong, one for Aurelle and one for New London, and you would need a back-up for each of those machines, because if one of them goes down, then you don't have another machine programmed that way. When you go to a vote center, they can go to any machine and vote, so Strong wouldn't require three machines any more."

The quorum voted unanimously to adopt a voting center system. They will pass an ordinance to that effect in the future.