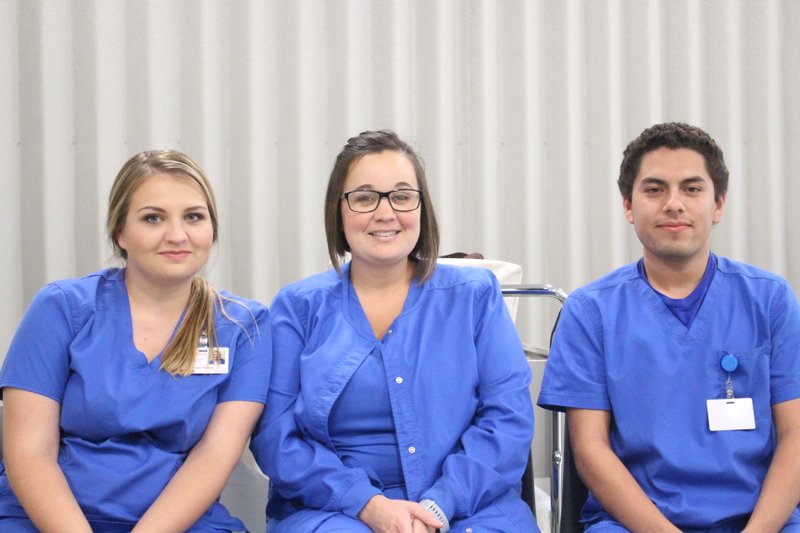 Morgan Dawson found herself searching her phone’s screen for the greenest in a line of blue nail polishes as she assisted a visually impaired woman in Utah through the Be My Eyes app recently.

Dawson learned of the app from Occupational Therapy Assistant (OTA) program director Dr. Cindy Meyer during the class’ morning updates, when Meyer showed the class a two year-old report from the BBC about it.

“She (the woman from Utah) was excited. Which, I was excited – with the amount of people that are on there, it said it could be weeks or months until I got a call,” Dawson said. “She seemed to know what she was doing.”

Along with Dawson, OTA students Amber Knuckles and Pedro Tena also signed up for the app. The three are all in their second semester in the OTA program and will begin clinical work next year.

Meyer described occupational therapy as a way to help injured or ill patients or patients that are otherwise unable to do their typical day-to-day tasks relearn or learn new ways of doing those tasks.

“We look at everything that you do all day long as occupation. That’s everything from: you got up this morning, you took a shower, ate breakfast, drove your car, your vocation (your job), to the fun things you do, whatever it is,” she said.

The Be My Eyes app uses video calling technology to help blind and visually impaired individuals receive assistance from sighted people with tasks big and small.

“It would not be unusual that a client that we have would have a low-vision issue,” Meyer said. “Being able to offer this as a resource to those clients, definitely, this is awesome.”

Technology like the Be My Eyes app can go far to make life easier for a visually impaired person. Meyer said occupational therapy patients oftentimes will not reach out for help every time they need it for fear of being burdensome; with the Be My Eyes app, visually impaired people are able to gain independence since they don’t need someone physically there for assistance.

“You have someone who is blind and you have family and friends that may get annoyed at you if you keep asking them over and over and over again [for assistance],” Tena said. “If someone wants to call me, I just want to see the experience and how things go.”

First released on iOS in 2015, the Be My Eyes app already has 2 million volunteers signed up to help. The National Institute of Health estimates that up to 1 million Americans were legally blind in 2015. In El Dorado, the Sight Impaired Group Help Team (S.I.G.H.T.) works to assist, inform and build the confidence of visually impaired people while also raising awareness in the sighted community.

Tena and Knuckles have yet to receive calls since there are so many volunteers already. When a visually impaired person using the app needs assistance, the app will call ten volunteers simultaneously. Whichever answers first will assist the caller.

App users are afforded full discretion when using Be My Eyes as well; users can choose whether to disclose information like their location, level of vision and name to the people they connect with through the app.

The three students hope to continue helping others as they move forward in their careers. Each still has at least a year and a half before they will graduate from SouthArk. Dawson said she is particularly interested in mental health, while Knuckles said she hasn’t decided yet whether she wants to work with children or the elderly. Tena said he wants to continue his education, become a doctor and work in pediatrics at Arkansas Children’s Hospital.

“Just do it,” Dawson and Knuckles said to those interested in trying the app.

The Be My Eyes app is available for iOS and Adroid users and is free for both volunteers and those in need of assistance.