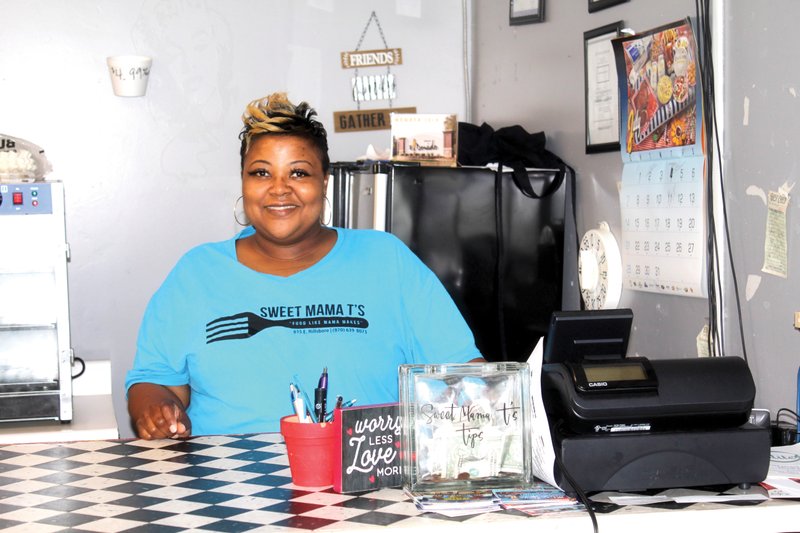 LaTwana Scott, owner of Sweet Mama T’s (615 E. Hillsboro) has quickly established her restaurant as a must-stop location in El Dorado. Scott focuses on providing hearty, homestyle cooking that “you would get at your mama or grandma’s house.” - Photo by Sarah Primm / News-Times

It’s less than two hours before Sweet Mama T’s soul food restaurant opens for business on a Friday in August.

LaTwana Scott — owner and operator of the eatery that serves “food like mama makes” — checks in with one of her team members to make sure racks of ribs are ready for the grill.

The ribs were part of a trio of hearty meats and entrees that included Boston butt and hamburger casserole that were part of the lunch buffet for the day.

Rounding out the menu were a variety of savory side dishes — barbecue baked beans, green beans, corn nuggets, fried okra, macaroni and cheese and more — and delectable slices of caramel cake for dessert.

Scott later provided a mouth-watering visual of the buffet during one of her regular Facebook livestreams and reminded viewers they may also opt for the weekly special, or “Sweet Deal”: a hamburger, fries and a soft drink for $7.

As I spoke with her, Scott apologized for her tardiness as she hurriedly hauled in food and other supplies that were needed for the day.

I assured Scott there were no worries and commented on the homey atmosphere while watching Scott’s team, which includes family members, scurry about to prepare for the restaurant’s 11 a.m. opening.

“That’s what I want it to feel like — home,” Scott replied with a warm smile.

• Swim or drown: Since opening in January 2018, Sweet Mama T’s has been featured in Arkansas Business magazine and online in Stories from U.S. Bank — a series of inspirational articles designed to encourage people to achieve their “goals, whether big or small” — as a standard-bearer for entrepreneurial success.

Scott said the recognition and accolades are the fulfillment of a 15-year dream of owning her own restaurant.

Scott, a 1992 graduate of El Dorado High School, began cooking at the age of 11 when she was asked to assist her mother, the late Lou Ann Scott, in the kitchen.

A school bus driver and seamstress, Lou Ann Scott would ask her daughter to look after “big pots of greens and beans” that she would start for the family’s dinner before heading off to work.

“She would say, ‘Twana, watch this,’ while she would go on her bus route,” Scott fondly recalled. “She pretty much threw me in there to swim or drown and I had to do it.”

It did not take Scott long to discover a passion for cooking and trying out her own recipes, which she would test out on classmates.

“The stuff I made at home, I would take it school and let them taste and they would like it,” Scott explained.

When Scott moved into her own place, the then-single mother of a daughter continued to hone her culinary talents.

Scott, who worked a variety of jobs, mostly clerical, made dishes for work and church potlucks and became the default chef among her circle of family and friends, whether it was an event or Sunday dinners at her house.

Her first paid catering gig came in the late 1990s when now-Mayor Veronica Smith-Creer threw a ’70s-style party at her church.

“People started saying, ‘I’ll pay you to make this for my husband’s birthday. My husband really likes your broccoli casserole.’ Or they would ask me how I would make my dressing or macaroni and cheese or ask me to show them how to make it and they would say, ‘I can’t get it taste like yours,’” Scott recounted with a laugh. “I started doing more parties and I would cook for my own parties. People would come because they knew the food would be good.”

Other opportunities rolled in, including a job as the weekend cook at a local independent assisted living facility.

“It was the first time I was able to get hands-on experience cooking for large groups of people, all three (daily) meals,” she said.

However, there was not much room to try out new recipes because Scott had to follow the menu and guidelines that were set by the facility’s dietician. It was at that time that Scott began hearing suggestions about opening her own restaurant.

A catering job for a graduation ceremony for one of the El Dorado Police Department’s Citizens Police Academy would set Scott set on the path to becoming a restaurateur. Some of the participants in the academy were members of First Baptist Church on Main Street and they asked her Scott to cook for a couple of parties at the church.

“Not long after that, a couple of their cooks quit and they asked me if I would cook for them on Wednesday nights,” she said. “That opened up a new clientele for me, cooking for the church.”

By then, Scott was working full-time as a 911 dispatcher for the EPD and following in the footsteps of her mother, she picked up a part-time school-bus route, ferrying students during the evening.

• A business plan: With her cooking and catering gigs picking up, Scott sought out a records clerk position upfront at EPD headquarters.

“It would give me weekends and holidays off. It would be lower pay but it would allow me to take my cooking jobs and keep a full-time job,” she explained. “But I applied three times and didn’t get it.”

Suggestions of opening her own restaurant began echoing louder for Scott but an inner conflict kept her from going for it, initially.

“I didn’t know if a business would be successful and it was fear. I still had bills to pay and I didn’t want to quit my full-time job,” she said.

Scott ultimately “stepped out on faith” and decided to walk away from the EPD after five years, with the same “swim or drown” mentality she adopted at 11. She put together a business plan and began scouting locations.

The spot at 615 E. Hillsboro was occupied by another restaurant at the time and Scott heard that the business was closing. Talks with the business owner did not go well and the owner of the building was strongly considering selling the property, rather than leasing it to a new business, Scott said. Securing a bank loan also proved to a bit more difficult than Scott had anticipated. While her own bank was wowed by her business plan, the underwriters did not approve the loan, she said.

Scott eventually turned toward South Bancorp, where, she said, a loan officer saw the potential in a local soul food restaurant that would be open on Sunday in El Dorado.

“And just to show you how God works, he suggested that I look into the building (at 615 E. Hillsboro). He said El Dorado needs this,” Scott said.

After months of prepping the building, which Scott purchased, Sweet Mama T’s — taken from an abbreviated form of Scott’s first name and a reputation for being called “sweet” — opened its doors to soul food lovers near and far.

“I got a call from a guy who said he was calling from Long Island, New York. He said he watches my Facebook lives and he told me to stay encouraged,” she said. “He said that if he ever comes this way, he can’t wait to taste the food.”

• Re-evaluate and stay encouraged: In the beginning, Sweet Mama T’s operated seven days a week but Scott said she eventually had to re-evaluate the schedule and settled on the hours of 11 a.m. until 3 p.m. Tuesday - Thursday, 11 a.m. until 7 p.m. on Friday and 11 a.m. until 4 p.m. on Sunday.

“I realized I was killing myself and me and my team needed time to rest,” she said.

Scott said she appreciates the overwhelming support she has received from the community, adding that it keeps her motivated, especially in tough times.

For anyone who is looking to start their own business, Scott advises, “Be prepared to put 110 percent of your heart, mind and soul into it and don’t give up. Stay encouraged.”

“You’ve got to make sure this is what you want to do for the rest of your life and that you can give it you undivided attention.”

With Sweet Mama T’s, Scott said she wanted to provide the community with another choice for homestyle cooking

“There were only one or two places I could go when I would get out of church on Sunday and I realized there was hardly anywhere you could go to get that good hearty meal like you would get at your mama or grandma’s house,” she said. “With this restaurant, that was my goal. That was my prayer.”