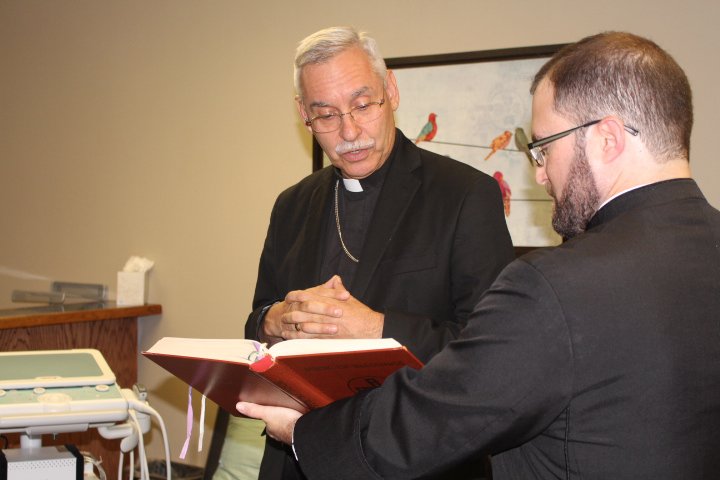 “We wanted to just take the time to celebrate and properly give credit to God,” said Kathy Love, nurse manager at Hannah PRC. “We just want to multiply how many times we get to use these.”

Hannah PRC recently received two new ultrasound machines, a GE Voulson S8 and an Esaote MyLab Gamma. The Esaote machine is portable and will be used in the center’s satellite offices in Camden and Magnolia; Sarah Wray, resource development coordinator at the center, described the Voulson as the “Cadillac of ultrasound machines.”

When Love and executive director Paula Williams found out in 2012 that they would no longer be able to purchase replacement parts for their ultrasound machines, donated to the center in 2004, they immediately began researching grants that might be able to help them obtain new ones.

It took six years of searching, but Hannah PRC finally found their new machines this year. One, the portable Esaote, was donated by the Psalm 139 Project, a ministry of the Ethics and Religious Liberty Commission of the Southern Baptist Convention.

“It is our joy to support the work of pregnancy centers around the country by equipping them with the latest ultrasound technology through The Psalm 139 Project,” said Russell Moore, president of the ERLC, in a press release. “This gift, on behalf of Southern Baptists who have given sacrificially for the sake of caring for unborn children and women in crisis, will no doubt be used as a powerful instrument for good. I pray for the servant leaders at Hannah PRC as they play an immeasurably important role in the church’s mission to be a witness for human dignity.”

“I had never heard of it before,” Williams said. “Almost immediately we were contacted and they requested more information. We were approved and in a matter of a few months we were awarded a machine.”

The Psalm 139 Project aims to give women in crisis or unplanned pregnancies the opportunity to see the fetus in their bodies before making any final decisions about their pregnancies. Like Hannah PRC, it is a pro-life initiative.

The Voulson ultrasound machine came from a local donation, from Holy Redeemer’s Knights of Columbus. Several members of the fraternity attended Saturday’s blessing.

Bruce Butterfield, a member of the local Knights of Columbus chapter and co-chairperson of the fundraiser, said he and other members of the fraternity held countless fish fries and other fundraisers to raise just under $20,000 for the machine.

“Tony Crawford, another Knight, knew about the ultrasound program and reached out to Hannah to see if they had a need, and obviously they did,” Butterfield said. “It took us a while to formally start the drive, but once we did, it happened in a hurry.”

The national arm of the Knights of Columbus, the Supreme Council, has a program specifically for ultrasound machines for pro-life pregnancy centers. They matched the funds raised locally, making about $40,000 – just enough for a new ultrasound machine.

“We have been overwhelmed with gratitude for all who have come alongside us, including many local donors, churches and the Knights of Columbus that have organized, raised funds, applied for the grant and walked alongside us during this process,” Love said.

Each year, Hannah PRC provides about 150 ultrasounds, between 15 and 18 per month. In some years, the total amount of ultrasounds provided has been as high as 300.

Bishop Taylor read from Genesis 1:27-31 and Psalm 90 from the “Book of Blessings,” before selecting one blessing written for technology.

“We’re asking God’s blessings on the efforts to save lives and to help women make good decisions regarding the gift of life the Lord has given them,” Bishop Taylor said. “It makes it really clear and concrete that they have a child inside of them, that it’s a living gift of God.”

He splashed holy water on the machines before celebrating the gifts and blessing with D’Almeida and Hannah PRC staff.

“I think that women, their bodies are respected, but there’s also a second body within them that is not of their own – that came from them; that came from God as a creation of His for them to take care of it,” D’Almeida said. “When they see the image from the ultrasound machine, you know – an image is worth a thousand words.”

Psalm 139 talks about the omniscience and omnipresence of God. That was a major theme on Saturday; Love and Williams are still amazed that after six years of searching, two state-of-the-art ultrasound machines fell into their laps at the same time.

“It is so obvious that God orchestrated all these events at the same time,” Williams said. “We are so humbled and so grateful to receive this blessing.”

To learn more about Hannah PRC, visit hannahprc.com or call 870-862-1317. Hannah PRC also has offices in Camden and Magnolia.