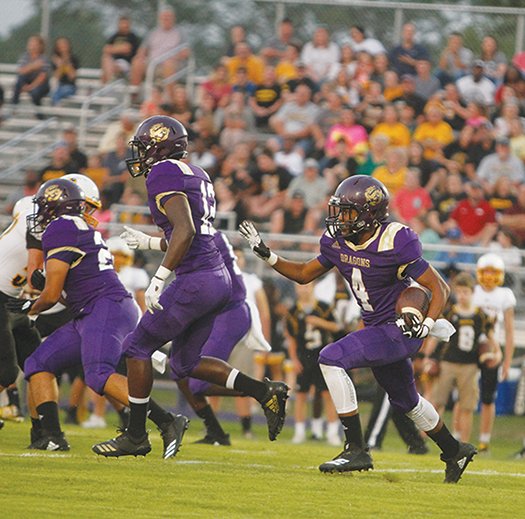 Terrance Armstard/News-Times In this file photo, Junction City running back Jakiron Cook looks for running room during the Dragons' clash against Harmony Grove at Junction City during the 2018 season. The Dragons and Hornets will open the season on Aug. 30 in a battle of teams ranked No. 1 by Hooten’s in 2A and 3A respectively.

After a two-year run as a 3A school that included a trip to the state finals in 2017, Junction City made a triumphant return to 2A in 2018 by winning their last 11 games en route to winning the state championship.

With the departure of Steven Jones to El Dorado, Junction City will defend its title with Brad Smith at the helm.

“When you’re the guy, you’re responsible for everything,” Smith said of the adjustment of being in charge of the program.

“All of the little things have to be done. You make sure all the I’s are dotted and T’s are crossed.

“When you’re a defensive coordinator, you have to worry about a small fraction.

“You have to worry about everybody and everything going on, not really worry about it, but you have to address it and make sure you give each thing equal time.

“As a defensive coordinator, I could just hide off in the defensive world and be semi-oblivious to everything else.

“You can’t do that as a head coach. You have to keep your eyes open and watch everything. There’s always little fires breaking out so you’ve got to carry your fire extinguisher around.”

Smith, who has been at Junction City since 2003, said the Dragons had a productive offseason.

Junction City is in the mix to contend for the state championship seemingly on an annual basis, but Smith said the Dragons take a simple approach.

“The world would really be shocked at how little we talk about winning state championships,” Smith said.

“We talk about competing and doing your best. No matter who you play or what you do, you’re always competing.

“I think it was (Alabama head coach) Nick Saban who said it at a conference that you go play to play, down to down, game to game.

“The most important game is the next game, no matter who you’re playing. That mentality has been there since I got there. That’s what we do.

“We’ve beaten people badly on the scoreboard and been horribly aggravated with the team, and then played really close games and lost and been very pleased with the team.

“You instill that, and winning takes care of itself.

Junction City will find out immediately exactly where they stack up thanks to their non-conference schedule.

The Dragons, who are ranked No. 1 by Hooten’s in 2A, open the season at Harmony Grove, the No. 1 ranked team in 3A by Hooten’s.

“When you schedule non-conference, you really try to get quality, quality people, and we’ve done so, plus they’re all close and well-attended, which is part of the business. You’ve got to put people in the stands,” Smith said.

“We like to play people that have good crowds and good games. Harmony Grove is loaded.

“Then they’ve got three or four young kids that nobody’s heard of, but they’re fixing to hear from. We battled them in a team camp, and we had our hands full with them.

“They’re superbly coached. Ernie Horstkamp is an excellent football coach. That’s the type of game we want to start the year with.”

The Dragons will then have a two-game homestand against Smackover and Haynesville (La.), who handed the Dragons their lone losses in 2018.

“They (Smackover) were loaded last year, and I think they’ve got the majority of those kids back, so that’s going to be another one, and Haynesville is Haynesville,” Smith said.

“They play against themselves every week. If they beat someone 50-0 and didn’t play what they call a good game, then they don’t feel like it was a good game.

“You find out where you stand and what you have to fix, because they will show your weaknesses real quick.

“You don’t want to have your weaknesses hid and then somebody show them up late in conference.”

In October, the Dragons will head to Louisiana for a clash with D’Arbonne Woods in Farmerville.

“They’ve been playing football for a while,” Smith said. “Trying to slip around and look at them a little bit, they’ve got some good athletes, good size. Farmerville has a ton of athletes because Union Parish High School is always a big power down there.

“I know they’ve won two Louisiana state championships in the last few years, so you’re getting kids from there and other areas. It will be a good challenge.”

Schools from Arkansas and Louisiana haven’t played against each other much over the years, but that has changed some this year with Union County schools playing four games against teams from Louisiana.

“We’re fixing to get down in there because schools like us, Bearden and Fordyce, teams that historically win seven to nine, 10 games, the smaller Louisiana schools want to play because if they happen to beat you, they get 10 points plus your wins,” Smith said.

“If they lose to you, they get your wins, so it’s definitely a win-win for them. I was in Louisiana for years, and I liked the points system.

“I thought it made sure that everybody who deserved to make the playoffs got into the playoffs.”

Junction City’s toughest test during their 11-game winning streak came at Fordyce, a game the Dragons won in the final seconds 7-6, and Smith said the Redbugs will be a tall order for the Dragons in 2019.

“Fordyce has every skill player that they used last year returning,” Smith said.

“I think we scored with under 10 seconds left and kicked the extra point to beat them.

“They lost a lot of linemen, so did we, but their skill is back and they’re definitely going to be a challenge.

“It was two years ago that those kids were moved up, so they’re just juniors. They’re in their third year of football, so where most people are, they’re seniors, but they’re not.

“We’ve heard Strong has a couple of really good skill kids. Hampton got to the finals three years ago, and I thought they were talented enough to get back.

“I thought they had the speed and the size to compete with anyone.”

If Junction City is to find themselves in contention for the state title, their younger players must grow into their roles.

“We’re young in so many places,” Smith said. “We’ve looked really good. I think we may be a tad faster than we were last year, but we’re not as big.